A curious mix of the human and the animated: Jolie, Malkovich, Hopkins are not really themselves here... 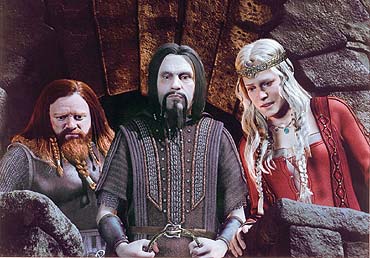 I didn’t watch Beowulf in 3D format but it came across as an intriguing piece of cinema primarily because of its cinematic form. The live action is digitally enhanced to create a curious mix of the human and the animated. So Jolie, Malkovich, Hopkins are not really themselves here; they are a little more than animated characters but a lot less than full-blown human beings.

Based on the English epic poem, the film is all about brave men battling demons, not just outside but also the metaphorical ones deep within. The action is set in the Denmark of AD 507 in the kingdom of Herot. King Hrothgar (Hopkins) and his people are living in constant fear of the monster Grendal who attacks them during festivities. He assails them on what Hrothgar refers to as days of "merriment, joy and fornication". Grendal is also the root of Hrothgar’s own deep secret and hidden guilt. What Herot needs is a hero who fights for "glory than gold" and rescues them from the hellish life and the one person who can do it is the legendary warrior Beowulf (Winstone). Expectedly, there are large-scale, edge-of-the seat clashes and some classic savage scenes. There are other interesting touches and some quirky emotions. It’s a philosophical play on what it means to be a warrior. How, almost like a saint, Beowulf has to rid himself of temptations personified in beautiful women. The film talks of how a warrior’s mind has to be unblurred and there are far too many women who come in the way. There are interesting characters beside the lead players: like Unferth (Malkovich) who always has an axe to grind with Beowulf. Or Grendal himself, who, more than a ruthless monster, comes as a tortured soul. You feel deeply moved by his plight and end up mourning when he gets slain and laid to rest by his mother. The most interesting are the women. Hrothgar’s young wife Queen Wealthow (Penn) who is taken over by Beowulf when he’s made King of Herot, the one who’s aware of the sins of her two men. And, of course, Grendal’s sexy, voluptuous mother (Jolie) who loves her son deeply and plots a seductive revenge on his death.