Loopholes in the law have been used to victimise a cabinet minister. Updates 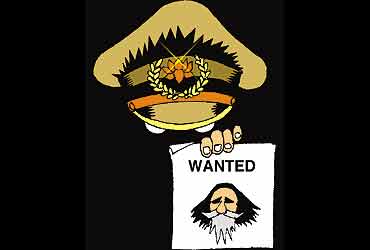 outlookindia.com
-0001-11-30T00:00:00+0553
Was it only two weeks ago that I warned readers about the way serious flaws in the criminal procedure code that allow the police to keep any Indian citizen in jail without filing charges for long periods have become instruments in the hands of unscrupulous politicians and businessmen to harass their rivals?

Well, it has happened again. And this time it is not the hapless chief executive and legal advisor of a German firm who have been hounded out of the country by an estranged collaborator, but a Union cabinet minister who is being persecuted. I am, of course, referring to Shibu Soren of the Jharkhand Mukti Morcha (JMM). The motive on this occasion is quintessentially political but it is mean and dirty politics that has brought Indian democracy to a new nadir of shame.

Sometime in the middle of July, the state unit of the BJP, which currently rules Jharkhand, decided that its best chance of getting re-elected lay in timing the state assembly elections to coincide with those to be held in Bihar in six months. The plan to discredit Soren (who is easily the most towering personality in Jharkhand politics) and if possible to hound him out of the elections altogether, was hatched shortly afterwards.

To do so, the Jharkhand government has dug into its case files and pulled out a flimsy charge that had lain dormant for 29 years! This was—on December 26, 1975, Soren was one of the 70 persons who had hacked to death 11 people in Chirrudih village and burned their houses. The charge was easy to formulate because at that time the JMM was a semi-insurgent group fighting for separate statehood. But for precisely that reason, it would be virtually impossible to uphold in any court of law. Which is why, like innumerable cases against Naga, Mizo, Akali and Kashmiri dissident leaders, it had never been pursued.

But the BJP was not on a belated search for justice. All it wanted was an excuse to arrest Soren, disgrace him, hound him out of office and make his image in Jharkhand lose some of its lustre. On July 19, the Jharkhand government issued an arrest warrant for Soren. Not only was this against a Union cabinet minister, but the action itself was unprecedented because technically the court had to first issue summons to Soren to appear. The arrest warrant should only have been issued when he failed to appear and was declared an 'absconder'. No summons had been served on Soren before the arrest warrant was issued.

What followed demonstrates how easy it has become to use what passes for 'Law' in India as an instrument of persecution and on occasion, state terror. On the same day, which was a Monday, Soren applied for bail before the Jharkhand magistrate's court. But somehow, the court could not find the time or guts, to listen to the appeal, let alone grant it. On hearing of the arrest warrant, Union home minister Shivraj Patil made a specific inquiry from the Jharkhand government on whether Soren had been declared an absconder. The director general of police made the mistake of telling him that this was not the case. The very next day, CM Arjun Munda transferred him, and put in a more pliant police officer. Shades of Narendra Modi?

Two days later, the Jharkhand police descended on Delhi and posted an arrest warrant on the wall of his house declaring Shibu Soren to be an absconder. They did not feel it necessary to inform the Delhi police, or to seek its permission to carry out a law and order function on its territory. One wonders how many people realised how deeply this contempt for the union government and for union territory has undermined the already fading pre-eminence of the Centre in the Indian federal polity. They will realise it when a large state like Tamil Nadu follows Jharkhand's lead.

Even that is not the end of this dismal tale. One week later, the magistrate's court in Ranchi had still not heard Mr Soren's bail application! It had also refused to hear his petition that all cases against him filed when he was leading the JMM's struggle for separate statehood should be quashed. That left Soren with no option but to offer his resignation from the Union cabinet. Round one thus went to the BJP.

Round two, however, will almost certainly go to the JMM and the Congress, for the Indian electorate has shown time and again that those whom the state hounds for partisan reasons become its darlings. But the BJP would never have gone to the lengths it has if the remorseless erosion of habeas corpus that I described two weeks ago had not made it so temptingly easy.

At its core lies the political establishment's toleration of the police's systematic abuse of its powers of arrest. In every civilised country in the world, a magistrate issues a warrant for arrest only after he or she is satisfied that there is a prima facie case against the defendant. But in India, magistrates have been in bed with the police from the very beginning. Their utter complaisance has encouraged the police to arrest suspects first and leave them to rot in hellish jails while it goes about trying to put together a case against them—usually through the brutal use of third degree methods. And since this hit-or-miss tactic has usually missed, in order to give themselves more time the police has obtained changes in law that now enable it to keep its 'suspects' for up to 60 days in prison without trial.

Against this background, it would have been better if Dr Manmohan Singh had not let Soren go, but used this blatant abuse as a launchpad for much-needed police and judicial reform instead.

Babes In The Wood