Benazir is dead. The question now on everyone's mind is: Will Pakistan survive? 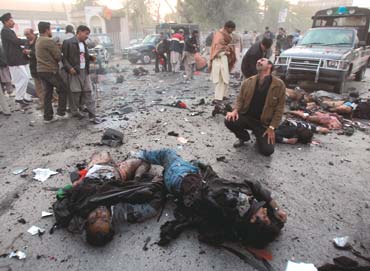 outlookindia.com
-0001-11-30T00:00:00+0553
Benazir Bhutto always considered Rawalpindi Garrison Town her second home. It was here that she attended school at Presentation Convent when her father Zulfiqar Ali Bhutto was a member of General Ayub Khan's cabinet. Those were days of joyous insouciance, to be replaced soon

after by memories dark and forbidding. For, it was in this town that Benazir met her father for the last time before he was hanged, the district prison now demolished and replaced by spiffy fast food outlets. This town in Punjab had been the bastion of the Pakistan People's Party before General Zia-ul-Haq deployed his military might to turf out the Bhuttos from here, paving the way for his son to claim it as his stronghold.

When Benazir Bhutto entered Rawalpindi Garrison Town on Thursday, December 27, it was an attempt to reclaim what she considered her own. A PPP election rally had been organised at Liaquat Bagh, where, on October 16, 1951, Pakistan's first prime minister, Liaquat Ali Khan, had been gunned down. The crowds were milling around in the park. The pugnacious Benazir spoke in her characteristic fiery style, telling the audience that Pakistan could not become the land of militants and promising the downtrodden a better future. She said her party had never bowed down to dictators. "Arrow (PPP's election symbol) is the symbol of Pakistan's solidarity and sovereignty," she said, as she concluded her speech. "We can give every kind of sacrifice for the honour and unity of the country." The Bhuttos, they always said, die young.

Palpably joyous at the response of the audience, and sporting a huge garland of flowers, Benazir wended her way to the bullet-proof white Mercedes. Inside the car, she congratulated party workers for organising a massive and successful rally (see eyewitness account, "She was so happy"). As she glided out of the Bagh, she ordered the sun roof of the car to be opened, eager to greet those who had been unable to enter the venue. Seconds later, an unidentified gunman fired three bullets, two of which lodged in her head—suggesting the sniper was no rookie. A suicide bomber then exploded himself, spreading mayhem and panic.

At the Rawalpindi General Hospital, the doctors failed to revive the heavily bleeding Benazir. They declared she was no more at 5.25 pm, her death heralding the end of an era and altering forever her nation's destiny.

As the news of her death spread like a wildfire across the country, even seasoned journalists found it impossible to report the event, event, speaking in choked voices, tears streaming down their faces. The ordinary Pakistani wept as inconsolably at the death of Pakistan's daughter. He expressed his outrage defiantly. When the moment came to place the casket containing her body into the ambulance that was to take her to the Chaklala air base, from where she was to be flown to Larkana, ancestral town of the Bhuttos, the people of Rawalpindi refused to allow it. In a frenzy that denies cruel reality, they wailed, "Bhutto zinda hai, Bhutto zinda hai." It was the same slogan that they chanted for years after the father was hanged. The Bhuttos never die. They rise again to haunt the wicked and provide comfort to the downtrodden. Benazir will do just that. For years.

At the Chaklala air base, the casket was placed in a C-130 aircraft. Draped around it was neither the PPP flag of red, black and white nor the national flag. The casket was, instead, swathed in the red and black ajrak chaddar, which is typical of the province of Sindh and worn in its rural areas. As I watched the poignant ceremony, I was reminded of what Benazir Bhutto had once told me, "I and my mother were never allowed to see the face of my father after they hanged him. This has always haunted me. In Islam, they say if you see the face of the dead for the last time, you are at peace with yourself and it is easier to accept the reality, otherwise you are tormented." But for ordinary Pakistanis, even those who saw her face for one last time, their torment has only begun. 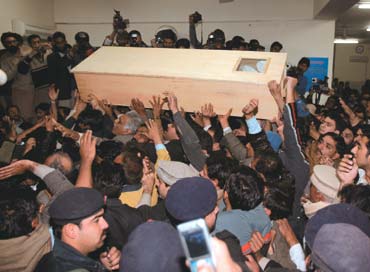 Benazir Bhutto was buried in Garhi Khuda Baksh, a village in Larkana. Her coffin this time, though, was draped in the PPP flag. Only a day after Id (December 21), she had confided in her confidants her irrepressible urge to visit the family graveyard in Garhi. She arrived there on December 22, and sat next to her father's grave for two hours, reciting verses from the Quran and later strewing red rose petals on the graves of her father and two brothers. She had buried all three. Six days later, she has joined them, leaving behind a bed-ridden mother in Dubai, too sick to even have a last glimpse of her daughter's face. The spot where she had sat down was the one that was chosen for her burial. A constant companion of her father when he was alive, she has now joined him in death, their adjacent graves a testimony to the tragic story of Pakistan's premier political dynasty which sacrificed itself to fulfill the democratic ideals of Mohammed Ali Jinnah.

Pakistan found it difficult to come to terms with the death of its leader. For more than 20 hours before she was laid to rest, Pakistanis from Khyber to Karachi not only shed copious tears but also went on an angry rampage, targeting symbols of the state. Banks, offices trucks, cars and trains were torched. People in rural Sindh switched off lights to mourn Benazir's death. In Lahore, posters and flags of the Pakistan Muslim League (Q) were set ablaze, venting their anger against the party which had been bitterly opposed to Benazir's return and which had bolstered President Pervez Musharraf's military rule. Shoot-at-sight orders were issued in several towns.

As Pakistan teeters on the brink of a precipice, nobody is asking the pressing political questions: Will Musharraf exploit the situation to reimpose the Emergency? Will he postpone the January 8 elections? Instead, people here are asking: Will Pakistan survive? Has the battle for its soul been won by Islamic militants and a dictator? Benazir's personality symbolised the unity of Pakistan; her party, like the Congress in India, welded the nation together, through its presence in every corner of the country. In a stirring front page editorial, A Dream Snuffed Out, The Dawn wrote, "It is a tribute to the tenacity of the politician par excellence that she kept her father's political legacy alive in a male-dominated society. He had championed the popular causes and given a sense of dignity to the common man. Benazir Bhutto had the mettle to do the same. The repercussions of her murder will continue to unfold for months, even years. What is clear is that Pakistan's political landscape will never be the same having lost one of its finest daughters."

The State, indeed, will have to countenance the wrath of PPP workers, who are lovingly called jiyalas, or diehard supporters. Their anger knows no limits, they know that anti-democratic forces have connived to kill their leader. They want justice, they desire to fulfil their leader's dream of re-forging Pakistan's soul in the crucible of democracy and moderate Islam. It is their anger the State should fear.

As of now, the election of January 8 has lost its meaning. Nawaz Sharif has already declared that his party will boycott it. He was among the first politicians to reach the hospital to pay homage to the departed leader. With the PPP calling for a 40-day mourning, it is debatable whether its leaders will want to contest at the hustings. Caretaker PM Mohammedmian Soomro has declared that elections will be held on schedule, but most Pakistanis here would read insidious intentions into such an ill-advised move. Pakistan needs time for its wounds to heal.

The PPP also needs to mull the leadership issue. Without a Bhutto at the helm, the party could well sink into the choppy waters of Pakistani politics. The problem is that Benazir's children are too young to lead it. There are other Bhuttos, like Benazir's niece and daughter of her brother Murtaza, Fatima. But she had been extremely critical of her aunt, even accusing her of killing Murtaza. Then there is Uncle Mumtaz Ali, who too had been stridently critical of Benazir for reaching out to the military. Sanam Bhutto is mother Nusrat's only child alive today. Husband Asif Ali Zardari is also a possible candidate for the top post, but he's a Bhutto only by virtue of his marriage with Benazir, though he had endeared himself to PPP workers by spending several years in prison. Benazir's death will, hopefully, make the Bhuttos close ranks and not destroy the PPP and—by implication—Pakistan.

The Man I Met In Mid-Flight