"Benazir Has To Clarify Where She Stands"

The former Pak PM on the road ahead: Pervez Musharraf, the Emergency in Pakistan and betrayal in politics. 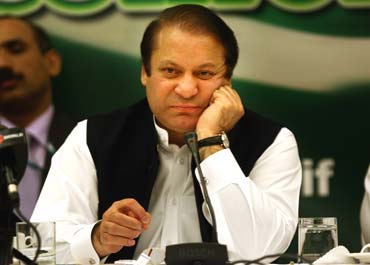 outlookindia.com
-0001-11-30T00:00:00+0553
This is one former Pakistani PM who now steadfastly refuses to compromise, who would rather not negotiate an agreement on a return to his homeland, and who refuses to have any truck with a military leader he abhors or "take dictation from Washington". From his home in Jeddah, Saudi Arabia, Nawaz Sharif spoke to Neena Gopal about Pervez Musharraf, the Emergency in Pakistan and betrayal in politics. Excerpts from an interview:

What was your first reaction when you heard Gen Musharraf had imposed Emergency?

He's gone back to square one, exactly to the point where he started in October '99. This is not an emergency, it's martial law under the garb of emergency. His attack on the judiciary is unheard of, forcing judges to take an oath validating the Provisional Constitutional Order. The manner in which the chief justice has been replaced, the way he and the other judges have been confined to their homes...it's a day of mourning for Pakistan.

Benazir Bhutto has announced she is convening a meeting of her Pakistan People's Party and the Alliance for Restoration of Democracy. Is the All Parties Democratic Movement (APDM, Sharif's alliance) going to participate?

The APDM is intact, and Benazir is not a part of it. She decided to talk to Musharraf while the APDM was formulating its strategy. If today she regrets the deal that she made with Musharraf and wants to abandon it, she is welcome. She has to clearly state where she stands. Does she want to stand by the general? Or does she want to work with a united opposition against him? I am disappointed. I thought we had a very clear understanding, both verbal and on paper. She signed a 'charter for democracy' but we now see a National Reconciliation Ordinance (NRO) that is nothing but personal give and take. She gets the cases against her lifted, Musharraf gets his presidency.

There are reports that Benazir has sent word through your former finance minister Ishaq Dar that she would be happy to work with you.

There is no real offer, Dar (only) had dinner with Zardari and Benazir. But I would be very happy to work with Benazir and all other moderate parties. Let me make this very clear: this does not include the religious parties. They let me down very badly on the day of my return, they were collaborating with the government. I will not rely on them. Maulana Fazlur Rahman cannot be trusted by anybody. He is a stooge of the establishment. I want to work together with Benazir, but she must make her stand clear. And why go in for an NRO? She must say she abandons it, that she stands with the democratic forces and not the military.

Apart from calling her on the day of the failed assassination, have you spoken to her as yet?

Yes, I did call her soon after the blast but we spoke to each other through VoA (Voice of America) who had us both on their show at the same time. We exchanged hellos (laughs).

We cannot be seen as strengthening the hands of a dictator. Even the MMA (Muttahida Majlis-e-Amal), they are responsible for the 17th amendment, the Legal Framework Order that validated Musharraf as president in 2002. If today they are supporting a democratic agenda, that must be very clear.

That was a 'jalsa', it was not organised, people just came out on the streets, raising slogans. I am talking to all components of the APDM to start a protest movement that brings together all democratic forces, strengthens the hand of civil society, the lawyer community, human rights activists, everybody, to wage a struggle against this dictatorship which has put our country back by 20 years.

But you are stuck in Saudi Arabia, how can you possibly organise it from so far away?

I am talking to my hosts. I have done that since the day I landed. I am trying to persuade them that my country needs me and that I must return. As for America, you know the kind of person I am. I will never take dictation from America. When I was prime minister, US President Bill Clinton called me five times asking me not to conduct the nuclear tests but I put Pakistan's national interests first. I did not listen. I went ahead.

Washington has said it's reviewing the aid to Pakistan. Do you believe Musharraf could break with the Bush administration and end the 'war on terror'?

Washington's response to Musharraf's emergency must be much stronger. I get a strong sense that he's reached a stage with America where he believes enough is enough. After all, the aid to Pakistan is peanuts. When that happens, the US will only have two people they can turn to, the only alliance they can support—a Benazir-Nawaz alliance (laughs again). But I'm not going to beg the Americans for their support.