She dances like the Pope and refuses the swimsuit because she can't swim. But the Force is with her. 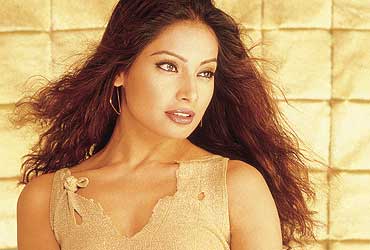 outlookindia.com
-0001-11-30T00:00:00+0553
The film that has scared most of the working class this season, Raaz, is essentially about a soul that comes in conflict with a body. We go in search of the body. A soul may be a compelling thing but it doesn’t have long legs. Doesn’t stand at 5 feet 8 inches, in a top that your neighbour’s kid normally wears, looking like the work of what has to be a heterosexual God who in one of his best Indian designs has used no straight lines. Only curves.

The same biased hands apparently lost their gift while making Anu Malik’s brother, Abu, who looks particularly flawed as he stands with his paan-stained teeth next to Bipasha Basu. But thankfully he goes away. Perhaps, he has inner beauty but our brief is to merely go skin deep. That’s where Bipasha fits in. Without the tangibles, it’s difficult to tell her story. She is rehearsing somewhere in Juhu trying to learn some dance steps which, according to informed opinion, she will never master. There are two other dancers with her, coaching her. Ordinary girls, pretty in a simple way, who have all the talent but somehow are only meant to sweep the stage clean for the princess, who will float in, dance badly and collect the roses.

The Force, as Jedi masters say, is with her. If it were left to what people call "free will", she’d have been a doctor. Imagine, what face, what arched body, what long fingers would have tried to save life. But some things are not meant to be. As a girl who just got out of school from Calcutta, another beloved daughter of a civil engineer who had never seen a fashion show in his life, she came to Mumbai to try her luck in the Ford Supermodel contest. On the night of the big event, "I got an eye infection". She was about to pack her bags and go back home "and become a doctor", when a make-up man casually asked her to cut the crap and go walk the ramp. Contrary to all expectations, even her own, she won.

She had one of the most atrocious ramp walks, yet there was something about her face, which contained what would later be branded "close-up smile", that saw her through. With a dark skin, however flawless, and the dancing ability of the Pope, she was not the next hot thing that the film industry was looking for. But Ajnabee, a strange tale of wife-swapping, came to her door. During the shoot, Kareena Kapoor showed the famous fangs of blue blood. As Mahesh Bhatt puts it, "Perhaps Kareena thought Bipasha was an unequal contender." But she survived. "Kareena can’t do anything to me," she says. Though the industry, like the Congress, worships the seeds of its own aristocracy blindly, rank outsider Bipasha somehow was meant to slip through the barricades, into the queen’s quarters.

When Mukesh Bhatt first called her up for Raaz, it was to ask her to play "the other girl" who will become the ghost, who will in the hush of the night creep behind solitary women and blow into their hair, who will shriek and echo to select persons, rain blood from the chandelier. She didn’t want to do the role. The film moved on. But just before they were set to roll in Ooty, Lisa Ray pulled out. Bhatt called up Bipasha. "I loved the narration and the new role," she says, "so I said yes." She became the agonised wife of Dino Morea who in the film plays the ghost most convincingly though he was only meant to act human.

Mahesh Bhatt, who co-produced the film, remembers: "She was going through a difficult time in her personal relationship with Dino." She had to hug, kiss and pretend to love a man she was drifting away from. Bipasha Basu may never get to Cannes for acting stakes, but it really doesn’t matter. For the lady is just passing through. After eight years, she will quit. Why eight? "After eight years, according to my calculations, I’ll be ready to settle down."

She looks outside her car as we drive down Bandra in search of food. "I am house hunting, you know. I’ve decided I want to live in Bombay, in Bandra." But theoretically, all girls want to live in Paris. "Paris too." And now suddenly, she is just another blabbering girl. "I’ll open a cafe in Paris."

Thankfully, her Blue Eye mobile rings. "Dino", she says into the phone stretching all the vowels. Still your boyfriend? "Yes. Why does everybody keep asking me that?" You tell us. "Why should my personal life bother anybody?" Because you’re almost famous. She murmurs something to herself which ends more coherently with "I am a good girl". Yet, she wonders, why many people have offered her "negative roles". She isn’t complaining. "I love playing the vamp. I find it challenging because, trust me, I’m not a vamp in real life, I don’t know how a vamp is supposed to behave." So, we start to educate Bipasha about how a vamp chiefly wears less clothes than the virtuous lead girl. "But I haven’t exactly bared. Some people tell me I expose. Midriff isn’t exposure. Everybody does that." There have been times when she has refused to wear certain costumes, "because they were vulgar". For some reason many people, "during narration", hint to her about "swimsuit scenes". But she’s always refused to wear the swimming costumes for a surprisingly logical reason: "I can’t swim."

Her father, who once spanked her for coming second in the class, never liked his doctor-material kid walking up and down a wooden plank and tried to subtly get his daughter back "on the right path", which has to be some street only in Calcutta. But today, she says, "he is proud". Fathers are fickle. The civil engineer’s daughter is, as they say, on the gradient. Raaz is expected to collect Rs 15 to 17 crore. Sir Paul McCartney, when he was in hiding in Mumbai, watched the film and called her up during intermission to say he loved it. Her next release is David Dhawan’s Chor Machaye Shor. She’s also signed Ajay Chandlok’s Nehle Pe Dehla with Sanjay Dutt. Vikram Bhatt has cast her in his next film, Aitbaar, with Amitabh Bachchan and model John Abraham. J.P. Dutta, who had signed almost everybody from the Bollywood telephone directory for LOC, had included Bipasha too. "But I’m not sure if I’ll be doing it. I don’t have dates." She’s very busy these days rushing for shoots, learning how to dance in between, putting on "the mask of being unapproachable to keep away the creeps", searching for a home, searching for Barista, sometimes for food. Growing up at her own pace. Another girl, just passing through. Bipasha Basu is here today.

What Will Happen In Post-APM Era