Manipulating surveys, encroaching on others, the Reddys run riot in Bellary 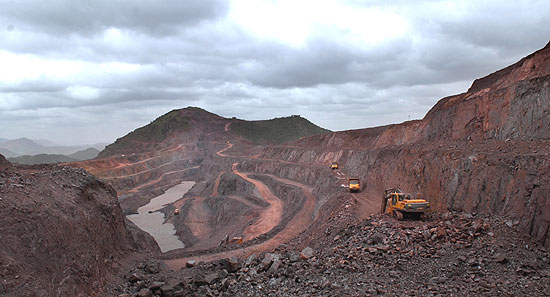 Some Ores To Row The Mining Boat With

How the Reddy brothers run Bellary as their own republic

Earlier this year, when mining overlord and BJP minister Gali Janardhan Reddy thundered in the upper house of the Karnataka assembly that “Bellary belongs to us”, there was an uproar. A reluctant Reddy later apologised but then he had unwittingly admitted to his gargantuan ambition. The Reddy brothers of Bellary—Janardhan himself, Gali Karunakar Reddy and Gali Somashekhar—not only have huge mining interests, but also overwhelming political clout in both Karnataka and Andhra Pradesh. It helps their writ run unchallenged in this district on the AP-Karnataka border, making Bellary a veritable Reddy Republic. One only has to track the allegations on the ground—of official machinery being misused, of rival miners being hounded, of surveys being fudged, of court orders being misinterpreted and contempt notices being utterly disregarded—to see that this could well be true. A Reddy reckoner:

Official Surveys Fixed: The most recent instance to have strengthened this doubt is the survey by the Indian Bureau of Mines (IBM) and the Survey of India (SoI). The Karnataka High Court had directed these two agencies in April 2009 to survey the disputed territory between two mines on the Karnataka-Andhra border. Tumti Mines on the Karnataka side had alleged that the Reddy-owned Obalapuram Mining Company (OMC) had encroached upon their mining area by destroying the boundary pillars demarcating the two states. The survey was conducted as recently as mid-July but questions have already cropped up about its authenticity. It’s alleged to be ‘tailor-made’ for the Reddys.

Besides Tumti Mines and other local miners raising questions, the SoI, which participated in the exercise as ‘observers’, also expressed dissatisfaction with the survey. In a July 24 letter to the regional controller of mines, the director of the AP Geo-Spatial Data Centre, Swarna Subba Rao, wrote: “During the field work, it was reported to the undersigned that the survey has not been smooth or proper as per standards of SoI.” Offering technical details in an annexure, the letter concluded it wasn’t possible to make any comment on the work’s accuracy.

Tapal Ganesh of Tumti Mines alleges that B.P. Sinha, the controller of mines overseeing the survey, would come once in the morning and disappear thereafter. He also completed the survey in just three days. “In a joint meeting held on May 27, the SoI had detailed the survey method and process. It had clearly said that it would take a minimum of 21 working days to one month to complete the job, but Sinha completed it in three days.” Sinha is also alleged to have used local district officials, perceived to be Reddy’s men, for the survey. When Outlook contacted Sinha, he refused to comment saying the matter was sub judice.

Connivance Of Local Officials: The involvement of Bellary district officials in the survey when the court wanted them kept out of the process has also become contentious. “There is no need to explain why the district officials got involved; it looks like they were there to serve somebody’s interests,” says Ganesh. The SoI has also raised serious objection to the participation of the deputy conservator of forests (DCF) of the Bellary division in the survey.

The partisan role of local officials is also highlighted by MSPL Ltd, one of the biggest mining firms in the region. Meda Venkataiah, the company’s executive director of mining, says: “Even if the highest authority approves our mineral dispatch permits (MDPS), the local officials wouldn’t issue it to us. They do this deliberately to hurt our business.” In a July 15 letter to his subordinate in Bellary, the director of mines and geology instructs: “It is examined and found that stopping issuing of MDPS (to MSPL) in the guise of verification of documents is totally illegal.” But even a week after this letter was dispatched, MSPL was running around to get its permits. Without the MDPS, the company cannot transport ore out of the mine, incurring huge losses. “To handle these local officials who take orders from the Reddys has become a huge problem,” says Venkataiah.

Interstate Boundaries Redrawn: Like the Tumti Mines, MSPL too has faced serious encroachment on their mining territory. They allege that the Reddys do not own any mining leases in the district and operate officially from across the AP border. But in Karnataka they either acquire a depleted mine and make incursions into adjacent mines or forest areas that have rich resources. To begin with, they remove the boundary pillars and, as and when they get a chance, they re-erect pillars in the adjoining territory and start mining the ore.

The biggest encroachment of MSPL mines has happened at Vyasanakere where a company called SB Minerals, owned by Reddy-backed BJP MLA Anand Singh, has moved approximately 200 acres into their territory. Earlier the Supreme Court had said that no party would mine in the disputed area and held the director of the mines and geology department responsible for the implementation of the order. However, when the illegal mining continued, it directed the chief secretary to ensure compliance. When he too failed, the apex court on July 20 issued a contempt notice against him. “The Reddys are a law unto themselves,” says Venkataiah.

However, the biggest indictment of OMC’s incursions comes from the inquiry report of the Karnataka Lokayukta. Clearly accusing the Reddys of crossing interstate borders to encroach on mines and forest areas in Karnataka, the report says, “The Ugguammagudda hillock (AP) and Timmappannagudda hillock (Karnataka) have been destroyed during the course of mining. In the process of mining, the Obalapuram Mining Company has crossed the interstate border by forming network of roads to link with the mine pit-heads of M/s Hind Traders.... This is a serious issue and it will jeoparadise the interest of the state.”

The Andhra Connection: Across the border in AP, the Reddys face surveys and inquiries. In fact, the SoI, on the request of the Union environment ministry, was to demarcate mining leases of the Reddys and others on the AP-Karnataka border from July 20 but the Reddys approached the Supreme Court to stall this survey. In April 2009, the environment ministry had also suspended the Reddys’ mining leases in AP pending a survey of the borders. But interestingly, the state government has been reluctant to allow this survey to happen.

When Outlook asked Union environment minister Jairam Ramesh about the efforts of the Reddys and the Andhra government to scuttle the survey, he said: “The matter is in the Supreme Court and I can’t say which way it will go. As far as my ministry is concerned, we believe SoI is the best agency to carry out the survey, but the AP government is saying that its forest department has already carried out this survey.”

In June, the ministry had ordered another inquiry by the director general of forests into alleged contraventions of the Forest Conservation Act by mining companies in Bellary district. When asked about this, Jairam Ramesh indicated that this inquiry was as good as dropped. “The Karnataka Lokayukta has already carried out a detailed inquiry, there is no need for another investigation,” he said. “I’ve written to the CM about the implementation of the Lokayukta report.”

The reason why the Reddys are ‘desperately’ seeking iron ore is reportedly for raw material for the multi-crore Brahmani Steel in Kadapa, the Andhra CM’s home district. Their alleged encroaching spree is ostensibly because there’s little iron ore left in their own mines.

The Future: The situation for the Reddys in Bangalore is not as black and white as in AP. Karnataka CM B.S. Yediyurappa was not available for comment, but a source in his office said that the CM was determined to clip the Reddys’ wings immediately after the Lok Sabha elections. However, a rebellion from some of his party colleagues had distracted him. “The Reddys used it to create uncertainty in the government,” says the source. “After that, they even pressurised the CM to withdraw cases against them. Yediyurappa wants the rule of law to prevail in Bellary; he is conscious that he is getting a bad name because of the Reddys.”

The indication now from the CM’s camp is that if the BJP government musters enough strength in the coming bypolls, there may be a showdown between Yediyurappa and the Reddys. Despite repeated efforts by Outlook, the brothers remained incommunicado.