Wiser counsel prevails on America over Iraq, but can the damage be undone? 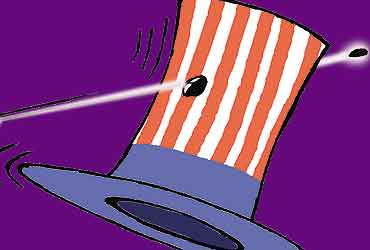 outlookindia.com
-0001-11-30T00:00:00+0553
In the past 10 days, US policy in Iraq has come back to earth with a bump. From wanting to rule the country for at least two years, restore peace, rebuild its infrastructure with 'Texan' help and create a brand-new secular democracy that would be a beacon for other countries in West Asia, US goals have shrunk to a determination to leave the country by next June with some semblance of democratic government in place.

The return to earth is welcome, but it has been unduly delayed, is still somewhat uncertain and may be too late. It was prompted by the shooting down of two American helicopters and deaths of 22 American soldiers at the beginning of November. This had been preceded by a steady rise in body count from one a day in August to two a day in October, to almost four a day in November, when 60 American soldiers were killed in 16 days. Behind this lies a steady increase in the number of attacks upon the American soldiers from between 10 and 12 per day in May to 35 or more per day in October and November.

But the rising casualty rate is only half the story. The other half is the failure of the US-dominated Coalition Provisional Authority (CPA) to establish even a modicum of control over Iraq. Control is different from military dominance. It requires an increasing cooperation in the running of the state from ordinary Iraqis and can be measured by the extent to which this is voluntarily forthcoming. Judged by this yardstick, the CPA's control over Iraq is low and, in all probability, declining.

The most unambiguous evidence is the near-total lack of cooperation from the public in apprehending 'Saddam loyalists' and foreign 'terrorists'. Despite offering handsome rewards, the Americans have—for seven long months—received next to no information about the identities or whereabouts of the 'terrorists'. Nor have they received advance information of planned or imminent attacks. Saddam too remains at large. Even the promised reward of $30 million has not bought the Americans one reliable piece of information on his whereabouts. The conclusion is inescapable: resistance is not confined to a few criminals, Saddam loyalists and foreign fighters but is widespread. The Iraqis are fighting back in the only way left to them. This is to deny information to the occupying power.

The growing desperation of the Americans is palpable. Their enemy remains as shadowy as ever, but grows ever more numerous. No one knows where the next land mine will go off or the next rocket-propelled grenade come from. They only know there will be more and more of them. The final straw was, no doubt, the CIA secret report which revealed that Iraqis had begun to 'lose faith' in the Americans' capacity to stay the course, and so were increasingly backing the resistance. But Washington should not have needed the report to come to this conclusion. Even the members of the so-called Iraqi governing council had no faith in the CPA. After the assassination of one of its members, most of the others had stopped attending its meetings.

All this could have been avoided had the Americans from the beginning stuck to their minimal aim of removing Saddam from power. Had that been all, they could have announced that there would be no changes in administration, that the army would not be penalised for fighting them, that belonging to the Ba'ath party was not automatically a sin, and most importantly, that they would hold elections based upon existing constituencies to elect a constituent assembly that would frame Iraq's new, and expectedly, federal, constitution. Who came to power and what kind of government he formed was not their concern, as long as it was a democratic government and not headed by Saddam.

Instead of sticking to this, Washington expanded its wish list to one worthy of Judy Garland in the Wizard of Oz.This included preventing the wrong kind of Shias from capturing the future government; preventing the Kurdish national identity being further consolidated in the north; purging Ba'athists from all positions of power; disbanding the army; and rewarding the Iraqi National Congress with the lion's share of power in the new Iraq.

Today, belatedly, the US wants to go down the road it should have trod in May. It plans elections to form a constituent assembly and a transitional government to whom it will hand over the functions of government till elections are held under the new constitution. But it may be too late to undo the damage it has done through its earlier greed and shortsightedness.

This is because the Americans have destroyed the Iraqi state, and have not been able to create another in its place. Nature abhors a vacuum. So it is being filled by shadowy private militias that control parts of cities and chunks of territory; and increasingly by foreign jehadis, who have become local heroes, sustained by an informal system of 'taxation'. When the Americans withdraw, these militias will resist the re-imposition of central authority. The new elected government will thus need coercive power to recreate a modern state just when the Americans will be hastening to leave. Unless the UN steps in, Iraq will then go the Afghanistan way.

This can only be avoided if power is handed over not just to a new government, but also to the UN at the same time. It will then be the responsibility of the latter to bring in soldiers from other member countries, notably Syria, Egypt, India, Pakistan, Bangladesh, Malaysia and Indonesia, to replace the Americans and empower the new government. The window of opportunity to restore peace and prosperity to Iraq is small but it is still open. It will not remain open for very long.