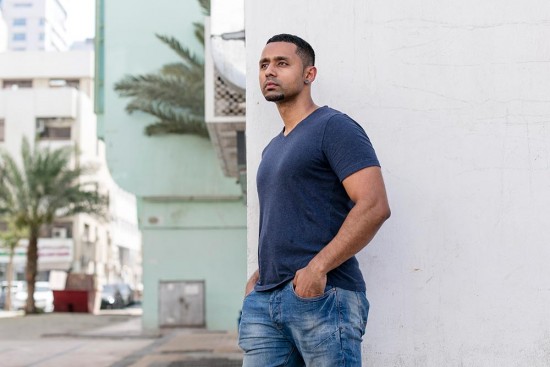 “In 1991, an English-speaking teen who went to an Indian school in Abu Dhabi was waiting to cross the street, when his tongue abandoned him by jumping out of his mouth and running away. Before the young man could apprehend and discipline the escaping appendage, it had grown limbs, a face, a mouth, a tiny proboscis, and fountain-pen blue hair, and thus, free at last, sprinted towards oncoming traffic, where it smashed into a massive vundy ferrying famished school kids who were released from the drudgeries of learning, causing all the nouns the now-deceased tongue had acc­umulated in its time in the boy’s mouth to be released into the air like shrapnel, hitting and injuring unsuspecting inanimate and animate things. Verbs, adjectives, and adverbs died at the scene, but the surviving nouns, tadpole sized, see through, fell like hail. Some, even acc­urately. The word Kelb found a mangy dog and settled in the mutt’s eye, puncturing its cornea. The word Vellum plummeted into a little puddle, where it sank to the bottom, meeting the word Maai. Both Vellum and Maai, troubled at first to discover each other, negotiated to cohabit as...