After two years as Pakistani citizen, she realised she was differently acculturised. 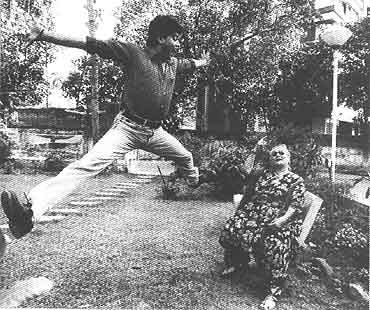 My parents were in Dalhousie when the 1947 riots broke out. Dr Fakeerchand, a friend, insisted they shift to his house. Subsequently, my brother, an officer in the Ahmednagar Armoured Corps, smuggled them under escort to Lahore. And where was I all this while? Safe in riot-free Bombay. Driving a green Hudson with fellow actresses Protima Dasgupta and Sushila Rani in it, lustily singing Vande Mataram on the streets of Bombay on the night of August 14. I remember serenading film publisher Baburao Patel with this in Umar Park at midnight. It was a good life.

And yet I had to leave. Migrate to Pakistan in 1975. Nasir, my husband, an actor and film director, died suddenly at 49 in 1974. I was 47, a mother of three kids and devastated. Emotionally vulnerable. The entire family, barring my sister Zarina who lives in Dehradun, lived there. They insisted I shift. So I adopted Pakistani nationality, moved to Lahore. It was emotionally very stabilising for me to be with family but I could never adjust to that country Muslims there are acculturised very different from Muslims here. Banaavat bahut hai (They are too contrived). We're more down to earth here. Too may taboos about what women can or cannot do, should or shouldn't say, wear or not wear. At parties one must disguise one's rum with coke. All the while the men do exactly as they please. Including divorcing at will, remarrying at pleasure. Sure, it's the same for women everywhere. Just that the difference get underlined there.

I stayed with Noorjehan as a houseguest for a bit. Very gracious hostess, fine person. Well, she is over made-up, offkey voice, limited conversation. In a way her face is the face of the Pakistan film industry As for the rest? I saw one Punjabi film. Didn't dare see another. And despite offers it was not the kind of setup I cared to work in.

For the rest it's a nice place to be in. Good looking race of people too: nice mix of Pathan and UP Muslim bloodlines there. My one sharp memory of the country I adopted for exactly two years and eight months? It's of my exchange with an obnoxious boisterous Pakistani man at a party. "We're going to invade your country," he thundered. "Not bloody likely," I assured him. "The state I live in is larger than the country you live in". Excessive response, maybe, but I was getting tired of being defensive about being Indian.