Before The War, The Flood Of Misery

The refugee crisis deepens as a ceaseless human tide crashes against the sealed Afghan-Pak border. 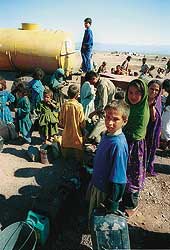 The sheer scale of their tragedy is staggering. unhcr officials estimate an influx of one million Afghans into Pakistan in the near future; this is expected to balloon by another million depending on the duration of the crisis. Says a unhcr official, "About 20,000 Afghans have already crossed into the Chaman district of Baluchistan. Over 30,000 refugees, mostly women and children, are also stranded on the other side of the Pak-Afghan border, largely due to Islamabad's decision to seal the border."

Harried Afghans are now reluctant to repose faith in the Taliban supreme leader, Mullah Omar, who appealed to them to return to their homes as the possibility of US attacks had receded. So the influx continues and the anger against the Taliban continues to mount. Kabul's Gul Mohammed and his family travelled for 48 hours, often through desolate areas at night, to reach the border. Dehydration and hunger sapped and broke his spirit, goading Gul to even contemplate extreme steps. Says he, "I thought of killing my family of eight and leaving a message in the name of Mullah Omar, Gen Musharraf and President Bush, blaming them for their death. But I didn't because suicide is a sin in Islam."