Before The River Runs Dry

Rituals sanction the pollution of the Yamuna. But here is a Brahmin who cleans up afterwards. 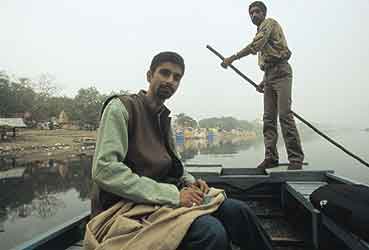 In 2001, after graduating, Vimlendu studied the Yamuna’s ‘political economy.’ The facts were frightening. Almost 70 per cent of Delhi’s drinking water is drawn from this river. While 3,538 million litres of wastewater flows into it through 19 major drains, only five per cent of this is treated. Sewage too flows in untreated.

The government has spent upwards of Rs 1,000 crore of taxpayer’s money on cleaning the river—as part of the Rs 1,200-crore Yamuna Action Plan, announced in ’93 and put into action in 2000. (The next phase has an outlay of Rs 624 crore.) But despite this cost-intensive intervention, Delhi is still saddled with what environmentalists call "a clogged sewer". Says Vimlendu, "Once pure, now profaned, we had to create awareness about this drain of Delhi." That was the hardest part. His studies revealed that more than half of the capital’s population had not seen or touched the Yamuna, even though it runs through 22 km of Delhi.