It was anyone's game on day five, but we are playing close to our best right now 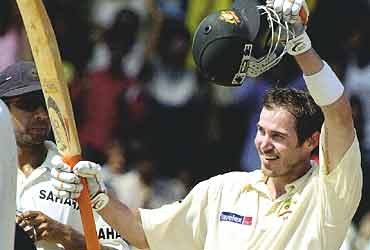 outlookindia.com
-0001-11-30T00:00:00+0553
At the end of the fourth day of the Chennai Test, a win, loss, draw and tie were all possible endings to the game. Rain, perhaps, was the least possible scenario considering the temperatures the Test was played in. On Sunday, the city got some respite from the heat, but it was at the cost of a great day of Test cricket.

What might have happened? I think it would all have depended on Virender Sehwag. If he had lasted out the first session of the fifth day, it would have been difficult for us to stop India from levelling the series. However, if he had got out early on that fifth day, we would have pushed ahead to a victory like the one we registered in Galle.

Another crucial factor would have been the way Shane Warne would have bowled. He had registered his first five-wicket haul against India, and he had become the world's highest wicket-taker earlier in the game. It would have been a great contest to see Warne in action on a fifth-day pitch against a line-up that has always prided itself for its ability to play spin.

As luck would have it, we were robbed of a stirring end to a game that was more in the tradition of the closely fought contests that these two teams have been involved in over the last few years. The Bangalore Test was completely one-sided, but this game saw the Indians come back strongly to dominate the first three days of the Test. At the end of the third day, a fourth-day finish was a distinct possibility since we were nine runs ahead with only six wickets in hand.

Once again, the late-order resistance was tremendous with Damien Martyn scoring a great century in adverse conditions. Martyn's last three centuries have been on the subcontinent, in the second innings and on rapidly deteriorating pitches—not bad for a bloke who grew up on the bouncy waca at Perth and was always accused of being easy meat for spinners.

The defiant hand played by Jason Gillespie was also pretty crucial since he kept one end going for an entire session. Had he succumbed to Harbhajan or Kumble's wiles in the first session, it might have been difficult to get a lead of 229. While I thought the Australians played pretty well on day two, three and four, the only area of worry was the way we frittered away a good start on the first day. We believe that if a team wins the first session they tend to dominate the game. However, Kumble was able to knock over seven batsmen in one session—not a very pretty sight for an Australian supporter.

The other worry was our catching in the slips. We tend to stand a little closer when we are in the subcontinent and in the West Indies, so the reaction time is often not enough. The only easy catch was the one Michael Clarke grassed in the first innings. The ones Hayden and Warne dropped in the slips as well as the ones in the outfield were pretty tough chances. Having said that, I've not seen us drop so many catches in a long time.

As both teams approach the break before the next two Tests, the Indians have more worries than us. Their batting is not looking as strong as it usually does. The huge plus for them is Sehwag's return to form. He is a momentum player, and from here on, he is going to be a major influence in the outcome of the series. It remains to be seen if some of his confidence will rub off on the other batsmen who are struggling for form. Yuvraj Singh does not look convinced that he is capable of opening the batting. He was very tentative during his brief stints at the crease. Saurav Ganguly is also looking tentative after a decent start in Bangalore. The same goes for V.V.S. Laxman, who has not shown evidence of the form that made him so infallible in the 2001 series. Since all the batsmen are struggling, everybody is waiting for Sachin Tendulkar to come back to the side.He keeps threatening to come back, but on the last two occasions he has backed out at the eleventh hour. It remains to be seen whether he will be declared fit for Nagpur, and both sides are watching his progress closely.

Harbhajan and Kumble are taking plenty of wickets, but they are not getting them as fast as they did on our last two tours. We knew that they are class spinners who will be successful against us, but by playing them with a mixture of aggression and patience, we have been pretty effective in tiring them out for long enough so far.

As far as we are concerned, just about every player in the side has performed well and contributed in either or both of the Tests. I've said this before but it merits repeating: a side that cannot accommodate a bowler of Brett Lee's class in its playing eleven must be special. Looking ahead, we have plenty of options in the squad, but there is no way we can dispense with anyone in the playing eleven. I heard some of the commentators argue that there is a similarity in our pace attack, but I think Gillespie, McGrath and Kasprowicz are very different from each other. McGrath comes close to the wicket and angles the ball away, while Kasprowicz goes wide of the wicket and angles the ball into the batsman. Gillespie relies on hand speed and is quicker than the other two. This combination is really working well at the moment, and it is unlikely that we will break it at this moment.

It is disappointing for me not to be part of the Nagpur Test since I had aimed at leading the team in the last two Tests. The repeated delays have made me a little superstitious so I've decided to take things as they come. My hand is feeling pretty good so I can start nets pretty soon. If all goes well, I will join the team in Mumbai on Saturday morning before they set off for Nagpur. I will use my time in Nagpur to build strength in my hand so that I'm absolutely fit for the last Test.

It has been truly frustrating to watch proceedings from home. I felt particularly sad when I was not part of the celebrations when Warne went past Muralitharan's world record. Since Murali is out of the game for some time, I hope Warne builds up a big lead in the next couple of months. He must also be happy that he has finally got a five-wicket haul against India. Now that he's got that off his back, I think he will be more relaxed when he bowls in the next two Tests.