The votes are in and the rankings are out. The nation's best B-schools, as they stand. 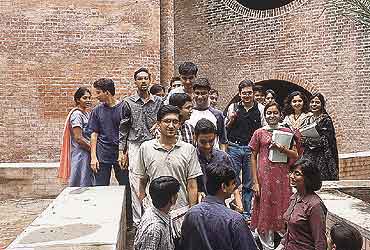 outlookindia.com
-0001-11-30T00:00:00+0553
Strangely enough, the biggest boom that the Indian economic reforms ushered in has not been very well reported: the business school explosion. As the private sector has upped and replaced the bureaucracy and public sector on all status-related parameters, as our vast middle class has turned radically materialistic and as India has proceeded stumbling into the global economy, a management degree has become the hottest and most coveted academic qualification in the country. For lakhs of youngsters and parents with stars in their eyes, the galaxies are spelt mba.

And, consequently, schools churning out mbas have proliferated.

B-schools in India can be divided into three broad categories: government-aided autonomous B-schools (the most famous of these being the Indian Institutes of Management, the iims), university B-schools and private B-schools. Among the iims, the ones at Ahmedabad, Bangalore, Calcutta and Lucknow are well-embedded in the Indian psyche and the two newcomers at Indore and Kozhikode have a bit of catching up to do.

University B-schools suffer from the usual bureaucratic bottlenecks. From curriculum revision to upgradation of facilities, there are a whole lot of permissions to be taken at every step. So it's all the more creditable for schools like the Faculty of Management Studies (fms) at Delhi University, and Jamnalal Bajaj in Mumbai to have managed to maintain their brand image in the face of the private onslaught. For instance, even to buy a water cooler, fms needs to seek ugc permission and then go through the tendering rigmarole before placing an order. Annual fund allocations are constantly delayed due to red-tapism and bureaucratic apathy. "But we have managed to perform despite such odds," says Prof S.P. Gupta, fms dean. "In the last three years, placements ended within 36 hours with average salaries at about Rs 12,50,000 per annum."

In fact, Chennai's Jesuit-run Loyola Institute of Business Administration (liba) prefers to offer just a diploma and not a post-graduate degree since that would mean that everything has to be modified according to university guidelines. Says A.C. Fernando, professor of economics: "liba prefers to retain its autonomy."

But the private B-schools are another kettle of fish altogether. In 1990, there were about 30 of them recognised by the All India Council of Technical Education. Today, they are 600! Obviously, they cater to far more students than the government-aided and university B-schools. But the disturbing truth which the Outlook-mdra survey has uncovered is that many of these institutes, which charge Rs 2-3.5 lakh for two-year courses, offer little learning and poor placements.

Says Dr R.A. Yadav, director of Delhi's Lal Bahadur Shastri Institute of Management (lbsim): "These schools have been set up by businessmen purely from a profit motive, with no respect for learning." Says Fernando of liba: "Being a missionary institute, we are not given to profit pressures. In other self-financing colleges, profit-making is the criterion."

If good jobs are the principal objective for getting into a B-school, the truth is that this year, in 30 per cent of these private institutions there were no campus placements, a sure indicator of recruiter interest. Even among those that did offer campus placements, the average salary is a paltry Rs 6,000 per month (while the students often paid Rs 10,000 a month and higher)! Faculty shortage is acute.About 60 per cent of these schools have less than seven permanent faculty members. And the average student-to-permanent faculty ratio is an inefficient 30:1.

On an average, they spend only 25 per cent of their revenues on faculty. The salary paid to permanent faculty varies from Rs 7,000 to Rs 1,00,000 per month, the average being Rs 18,000. Shortage of permanent faculty is met by visiting faculty who are paid by the hour (Rs 500-1,500 per hour). Interaction with industry, a vital part of management education, is also very low: 45 per cent of the institutes have not conducted any mdp (Management Development Programme) or taken any consultancy project in 2000-01. As far as infrastructure goes, 65 per cent of the institutes have less than 5,000 books in their libraries.

However, there are some private management institutes with the necessary infrastructure, academic environment and pedigree to produce competent managers. Some of them have also built strategic alliances with institutes abroad to build expertise.

Placements: Among the parameters Outlook and mdra used to rank B-schools, we gave the highest weightage to placement performance: what sort of jobs did the students get? Represen-tatives from several institutes requested us not to make it the most important parameter. However, the majority of B-school professors agreed that there was no way to avoid making placements the biggest parameter. We found while conducting the survey that B-schools are extremely sensitive about these rankings (indeed, we are resigned to receive irate phone calls and mails about our rankings even though we have kept our methodology totally transparent and objective (see page 52). So to recheck, we used mdra's website www. indiabschools. com to ask whether placements should be the most important criterion. A good 3,000 visitors to the website cast their vote, and more than 75 per cent voted "yes".

But the tragedy is that most of the institutes talk to industry only when placement season looms. Whereas interaction with industry has to be a continuous process, right from student selection to curriculum development. Says Dr Panduranga Rao of icfai Business School, Hyderabad: "We have a 16-week faculty-supervised summer internship programme and also provide on-the-job training opportunity to students, projects where students work for four days in industry and attend classes for two days a week. This exposure has culminated in final placements with premier companies."

For, in spite of all the hype and hoopla, the truth is that, except for top-league B-schools, placement performance in 2000-01 has not been that great. "Our aim should be to fill up important positions with our boys in all mncs, not only in India but abroad," says Dr Pritam Singh, director, iim Lucknow. In pursuance of this goal, some B-schools are even offering foreign languages as an elective. But in more than 80 per cent of B-schools, there are no foreign placements and among those which do attract international recruiters, very few have 10 per cent or more of their students placed abroad.

Intellectual Capital: In a recent conference where both mba students and industry representatives were present, a student raised the old swadeshi point: "With so many mncs coming, won't our nation be subjugated like the British days?" Replied an executive: "If that happens with so many B-schools around, then we deserve to be subjugated."

But the critical issue here would be the quality of faculty.And the findings of our study on this count are rather dismal. In more than 50 per cent of B-schools, not a single book, article or case study has been authored by their faculty in the last year. The administration is partly responsible for this intellectual inactivity. For, in more than 70 per cent of private schools, the faculty has to teach up to eight courses in a year. With such a high workload, who would have the time for research?

Another popular area of debate is whether to hire permanent faculty or depend on visiting faculty. With the ugc prescribing higher salaries for professors on the basis of the Fifth Pay Commission's recommendations, institutions find it easier on the pocket to pay part-time faculty by the hour. After all, visiting faculty have no overheads and statutory perks like provident fund. But most students interviewed found visiting faculty lacking commitment. Says Jayati, a student in fore School of Management, Delhi: "The visiting faculty should be drawn from industry and should be masters in their field so that we can gain from their experience. But such courses should be specialised and few. The foundation courses should be taught only by permanent faculty."

Infrastructure: A wired campus of more than 100 acres, air-conditioned classrooms with lcd projectors and video conferencing facilities, hostels with single-occupancy rooms and each student provided with a computer with total interconnectivity, a library with links to international databases, gym, canteen, 24-hour access to the computer lab and library, that's the ideal B-school infrastructure. But how many in India boast this? Hardly any, beyond the iims.

Only in 10 per cent of B-schools is it mandatory to stay in a hostel. Does it help? Of course, says Dr A.K. Sengupta, director, S.P. Jain Institute, Mumbai. "It helps in developing team spirit." But our survey shows only 20 per cent of B-schools provide residential facilities to students and of these, more than 80 per cent don't provide single-occupancy rooms.

Outlook-indiabschools.com Perception Survey: For the first time in India, a perception survey was carried out on the Net to gauge the satisfaction of relevant stakeholders. More than 3,000 students, 250 faculty members and 300 executives participated. The survey was supplemented by field visits of mdra staff to B-schools to interview students and faculty.

Under the B-school boom simmer a lot of problems. As Dr Devi Singh, director of the Gurgaon-based Management Develop-ment Institute, says: "When the crowds increase, people realise sub-standard products have filled the markets. And it's only then they look for standards." But a lot of people could get hurt on the way.