Beating Around The Bush

A tough new UN resolution on Iraq, backed by France, reins in a belligerent US for now More Coverage 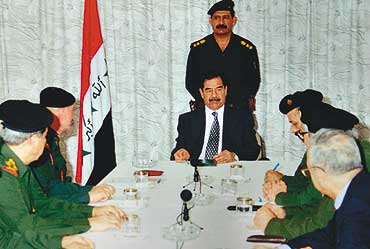 outlookindia.com
-0001-11-30T00:00:00+05:53
Just before the United Nations Security Council voted on the Iraq resolution, French diplomats were busy explaining their campaign against the unilateralist impulses of the United States. "What we are looking for is for the UN to remain in the centre of the game—to assess, to decide, to execute. Of course, we want to keep the US in the UN game. What we don't want is for the US to use the UN as a tool for unilateral goals," explained a French diplomat to Outlook.

As the United Nations Monitoring, Verification and Inspection Commission (UNMOVIC) prepares to send an advance team to Baghdad next week, France should feel satisfied in having persuaded the US to accept President Jacques Chirac's campaign for a two-stage process. First, a resolution that shifted the emphasis from regime change in Baghdad to getting UNMOVIC back into Iraq, bringing the focus back on effective disarmament; the second, to consider what the UN should do in case Iraq fails to comply with the provisions of the tough new UN resolution (No 1441) in the given time-frame.

The resolution itself is the basis for the mother of all coercive inspections: Iraq has to provide a full and current accounting of all its Weapons of Mass Destruction programmes by December 8; the UNMOVIC and the International Atomic Energy Agency (IAEA) will resume inspections no later than December 23. They will then update the Security Council 60 days thereafter (February 23). Any breach will be reported as it happens, and the Council has the right over options to secure Iraq's compliance.

But the French victory hasn't come cheap. Le Monde quoted an American source in the UN as saying that France would find the "resistance" to the US costly, that French ambassador to the UN Jean-David Levitte (who negotiated the text) would also learn the same. It's another matter that Monsieur Levitte has been named the French ambassador to the US for a job well done.

The US subsequently made it clear that it is not about to get bogged down by the procedure of inspections, and won't allow the resolution to "handcuff" President Bush. What they are looking for are early signs that Iraq intends to fully cooperate with the UN. If not, there would be hell to pay.

The French have developed an aversion to these repeated threats of unilateral action. The defining moment came in December 1998, when the world learnt, on the radio, that Richard Butler (the then chief of UNSCOM—United Nations Special Commission) had left Iraq (after it refused to cooperate further with UNSCOM) without waiting for the Council's advice, preferring instead to discuss the matter with Sandy Berger, then president Clinton's security advisor. The next day, even as the Security Council held an emergency meeting to discuss this development, the Americans and the British bombed Iraq in an operation called Desert Fox. Officials in Paris say Chirac vividly recalls this violation of rules "minute by minute".

Desert Fox lasted four days. The Clinton administration declared, ironically now it seems, that the attack had severely damaged Iraq's capacity to build wmd. Indeed, the French don't even think that Iraq is a nuclear menace. "It is a pre-industrial society. It does not have the money nor the resources to build nuclear weapons." Could Desert Fox then be repeated if UNMOVIC failed like UNSCOM did?

A senior French diplomat says that "UNSCOM failed because it was distorted by Butler to become a tool of the cia. If we reach a point where there is an incident after the inspectors go back to Iraq, there will be a strong impulse to use this as a justification to use force. If it is a small incident, then the international community can call for balance. But if it is a major incident..?" The official throws up his hands."The disadvantage is at the local level, where there can be misunderstanding."

But the French are clear that there is much to be discussed in the coming weeks. "There are different ways of using force. There is a question of proportion, of response. If a UN inspector tries to enter a mosque, say, on a Friday, and the mullah says "no", would this constitute a breach?" The French are clear that through their eight-week battle at the UN they have said no to the use of force without the Council. "We are not giving a blank cheque. We are not in favour of a regime change. Nor are we for launching attacks. The disagreement is how to decide on the use of force."

This is a disagreement waiting to spill over as the cat and mouse game of inspections begins all over again in Iraq after a lull of four years.

'Calcutta Robbed Me Of Words, I Was Mute'