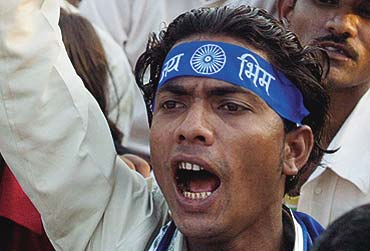 It's a week on and the occasion is Dr Ambedkar's 50th death anniversary, on December 6. The anger of the past days has turned into a show of peaceful strength as lakhs of Dalits converged at Dadar Chaitya Bhoomi in Mumbai to pay respects to "their God". This is where the 65-year-old Ambedkar was laid to rest. Before he passed away, he was a broken and bitter man, done in by the political machinations of his day. Back then, there was little political or social space for Dalits; despite social engineering in his own Maharashtra, the situation is more or less the same today.

You don't have to go far to see why. Ask fiftysomething Bhaiyalal Bhotmange, a Dalit farmer from Khairlanje village, Bhandara district, who helplessly watched as his wife Surekha, daughter Priyanka (19), sons Roshan (17) and Sudhir (18), were paraded naked, beaten and stoned, sexually abused and murdered on the evening of September 29 by a mob of allegedly OBC men. Their crime? The Bhotmanges—especially the women—defied the villagers and refused to part with a portion of their land for a road. Since then, Khairlanje, a lost little village on the map of Maharashtra, has turned into a synonym for old atrocities and the new indifference towards Dalits.