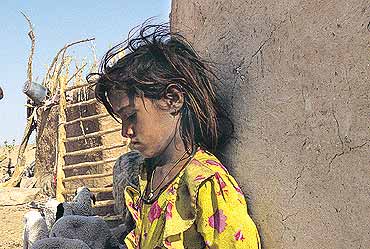 And this pattern to India's prejudice against the girl child, say experts, is becoming clearer, sharper as detailed data continues to emerge from Census 2001. Released earlier, the provisional census data had already shocked by showing that India at present has only 927 girls for every 1,000 boys in the 0-6 age group, worse than the 945:1,000 ratio of the 1991 census.

More recent data and analysis is now bringing out the fact that, contrary to assumptions, female child 'deficit' is much higher in the urbanised 'progressive' parts of our country; the male-to-female sex ratio for the 0-6 age group being 1,000:903 for urban India and 1,000:934 for its rural counterpart. Also, that it's in the cities and towns of some of our richest states like Punjab, Haryana, Gujarat and Maharashtra that the girl counts are the lowest (see box).