Girls in a north Kerala district rarely make it through school before they are wedded to a grey, traumatic world of perpetual motherhood 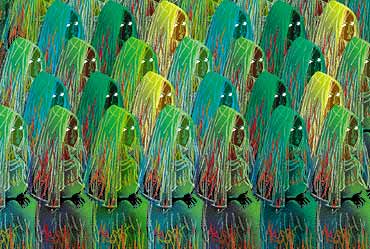 outlookindia.com
-0001-11-30T00:00:00+0553
Mothers at 15. Grandmothers at 30. And great-grandmothers at 45. They litter the social landscape of northern Kerala's Malappuram district. Here mothers and daughters deliver at the same time. Sons are breastfed by the grandmother and brothers are breastfed by the sister. For they deliver in the same hospital ward, and share the same room after delivery, taking turns to feed the babies. So entrenched is the practice that they feel nothing strange about it.

Like Aysha, 30, and Bilkis, 15, of Manjeri in Malappuram. They delivered in the course of a week in the Manjeri Government Hospital, sharing the same doctor and ward, Aysha for the seventh time and Bilkis for the first. "If you also deliver along with your daughter, who is there to look after her?" asks Dr A. Ramadevi, gynaecologist, who attended to both mother and daughter. Aysha shrugs and says: "Everything will proceed according to custom." It is customary that Aysha and Bilkis breastfeed the babies in turn. Don't they feel embarrassed? Bilkis looks down. "Initially I was. Not any more. I have been seeing it all my life."

Ramadevi attends to at least 15 deliveries of child-mothers a day in Malappuram, a predominantly Muslim belt, where a woman becomes too old at 18. "There are at least 500 such deliveries in a month here. This is excluding the affluent who frequent private hospitals," she says. Child marriage is not exclusive to Muslims, it spans all communities and classes. M.P. Gangadharan, a former minister in the previous UDF government, was accused of marrying off his minor daughter. The PIL against the marriage was filed by Nawab Rajendran, a well-known public interest litigant. Gangadharan had to quit his ministerial berth in the aftermath. The head of a local body in the district also got his minor daughter married recently. The practice is also prevalent among OBCs, where girls are married off before 15. Only the Christians abstain from this pernicious practice.

In a Rapid Household Survey conducted by the Union ministry of health and family welfare, the average age of marriage of a man in Kerala was found to be 28.7 and 22.7 for a woman. The survey covered 10,495 women. It found that while 9.1 per cent of Kerala women marry before they are 18, the figure for Malappuram is a dizzyingly high 36 per cent. This trend replicates itself in the northern districts of Kannur (19 per cent), Kasargode (18 per cent) and Kozhikode (14 per cent).

Clearly, teenage and marriage synchronise most easily in Malappuram. A girl has to get married before she is 18 or she is out of date in the matrimonial market. It's a dreaded thought which erodes the prestige of the family, invites social stigma and invites the nuanced query: Why is the girl not married? Girls seldom complete class 9. "I know mothers who approach the school principal, begging that her studious daughter be failed, so that she cannot reach Class 10 and become ineligible for marriage. Ninth class means below 16," says Prof Gowri from Manjeri, a member of the state secretariat of the cpi and the just-dissolved State Women's Commission. It is quite often that a girl is "seen" by the boy or his parents in her classroom.

Literacy may have made its strides in Malappuram but the accent still remains on marriage, not education. No one wants an educated bride and the girls, once married, drop out of school. A bride is usually between 13 and 14 and habitually delivers in a year. The boy can be 20 or 22 or much older, depending on the social status of the parents. "The girls find it difficult to adjust but they become pregnant all the same. Talaaq is common and I know women who have married thrice by the time they are 22," says Gowri who also heads the NGO Sarojini Amma Smaraka Mahila Samajam. Neither society nor authorities interfere.The law forbids marriages for girls below 18 but the marriage itself is legal. And should a divorced girl return home, she's considered a burden and passed on to whoever may be available. They are even given in marriage to impecunious men from Mysore who are in Malappuram to look for work.

Why do the girls themselves give in so easily to this family and societal pressure, tie the knot and end up in misery? Explains Dr T.N. Raghuram, a psychiatrist practicing in the district for the last 18 years: "Girls agree to marry under family pressure. They are brainwashed into thinking that a girl is old at 18. They're also bewitched by the bejewelled, silken festivity of marriage itself and its spotlight on them. But differences begin to surface almost from the first night because girls are ignorant and scared, seldom matching the hyper-expectations of Gulf husbands, fed on blue films and pornography and afraid of non-performance."

Typically, men in Malappuram gravitate to the Gulf for a livelihood. Not educated enough to get skilled jobs, they land odd ones. Which permit them to come once in three years, sex-starved and desperate for marriage. Local boys marry to get the dowry to go to the Gulf or to collect dowry for a sister. Or on parental compulsion to bring in someone to help in the house. The bride gets transplanted into the new home and is expected to transform herself. When she is not "satisfactory", she is promptly discarded in favour of another. Many of these girls develop post-marriage psychosis. And the man's family use the charge of premarital illness to effect a divorce while retaining the dowry.

Talaaq-ed wives thus are quite common and they contract marriages a second or a third time, often with men who are poorer, older, divorced, or widowed with children. "The frustration level is high among women," says Raghuraman. Given the wide gap in their chronological and psychological ages, depression becomes part of the female psyche here. It manifests itself in psychological symptoms like fainting, screaming and body pains, according to doctors. In fact, Malappuram women are famous for a mental trauma called Gulf syndrome in psychological parlance. Ameena, a great-grandmother at 45, is one such case of chronic depression. "She tells me her life is over, there is nothing to live for. Elsewhere life begins at 40 for women. Here they just fold up," says Raghuraman. The only positive aspect in this social set-up is the willingness of women to consult psychiatrists.

Girls, teenagers all, are also unable to cope with early motherhood. "Here the first delivery is invariably by 15. Women develop a host of symptoms like anaemia from repeated pregnancies, and abdominal pain because of an undeveloped pelvis. They may look well-grown but pelvic development is inadequate until a girl is 21. This induces pelvic inflammations. It also causes complications both during pregnancy and delivery. Caesarian deliveries are increasing in Malappuram," says Ramadevi. Vaginal discharges and menstrual irregularities too are common. As is uterus removal along with miscarriages and early labour. Children have very low birth weights and those born of child-mothers also develop mental retardation, which again is quite usual in the district. "Repeated pregnancies can destroy a woman's health and it is usual for a woman here to deliver eight or even 12 times. Husbands are against sterilisation of wives because they feel it might erode her sexual potency," she says. Consequently, they become susceptible to sexually transmitted diseases courtesy the multiple sex partners. At the same time, the repeated childbirths make them vulnerable to the cancers of the uterus and the cervix, according to a study by a Cancer Society.

Efforts to create awareness among women and schoolgirls are met only with resistance."We wanted to conduct awareness classes in schools, to empower girls to say no to early marriage and becoming school dropouts. Now few girls resist, as their analytical or thinking faculties are undeveloped. But no schools gave permission," says Gowri. Clearly, it's one social mire you sink deeper into the more you try to get out of it.