The community's in the dock again, but this time the soul-searching has a back-to-the-wall feel to it 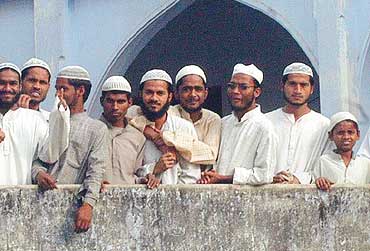 With the Mumbai blasts being seen as a coming of age of domestic terror, the Indian Muslim is coming to terms with the fact that there may be some hard-core, motivated terrorists in their midst, however small their number. Yet many are in a state of denial. Says Shahid Siddiqui, Nai Duniya editor and Samajwadi Party MP: "If one goes by the writings in the Urdu press, the community knows it has the most to lose if the jehadi mentality catches on. They are in trauma." It seems that whenever terror comes to the forefront of the national debate, Muslims emerge as the biggest losers.

As it is, Muslims are seen as the spoilers at the party where India has lined up a tango with the Americans. George Bush may not be loved by Indians, but he is truly hated by Muslims the world over. And Indian Muslims have been unabashed in admitting that they are concerned about world trends and India’s growing friendship with the US. Qurban Sheikh is an unemployed youth who hangs around a small dargah in Mehrauli, Delhi, but he has a worldview. Muslims, he says, have become victims everywhere. "They have killed us in Bosnia, Palestine, Afghanistan and Iraq. In India too, they are now calling us jehadis. We are trapped." In small mosques across the country, world events are debated and spoken of from the pulpit. Since the days of the Khilafat movement, Indian Muslims have been concerned about the fate of the larger Ummah.