Beads Of Sweat On The Mahal Wall

Overwhelmed by history or art, not many spare a thought for the poor rickshaw puller of Jaipur 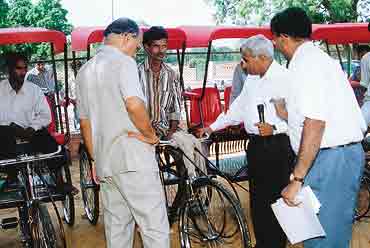 outlookindia.com
-0001-11-30T00:00:00+0553
The pink city is not exactly in the pink of health. Far removed from the exotic palaces and forts, there’s a dark underside to Jaipur—the plight of 20,000 rickshaw pullers. A cheap mode of transport, rickshaws are concentrated mostly in the walled city covering Ramganj, Johari Bazar, Chandpole, where most of the historical monuments stand.

Most rickshaw pullers don’t own their vehicles but hire them on a daily basis. There are rickshaw kings in the city who own more than 10,000 vehicles and rent them out for rates ranging from Rs 15-20 per day. Undernourished and weak, most pullers suffer from diseases like tuberculosis, respiratory disorders and arthritis.

Despite this gloomy picture, rickshaw pullers like Shabbir Ali, Badhai Das and Salim Ahmad are a happy lot today. Thanks to the efforts of Meetha Lal Mehta, a retired IAS officer who worked towards getting ownership rights for rickshaw pullers. "I thought of working for the proprietorship of rickshaw pullers mainly because the plight of these poor people are not on the government’s antennae. Everybody rides these rickshaws, many even sympathise with the pullers but forget them the moment they step off the rickshaw," he says.

In 2003, a random survey revealed that a rickshaw puller’s average income was just Rs 3,000 per month with most paying a rent of Rs 20 per day. Nearly 28.5 per cent pullers had no home and 45 per cent were under debt obligation that ranged from Rs 3,000 to Rs 1 lakh. Mehta felt that if the rickshaw pullers could own their vehicles, their lot would be better.

Convincing the pullers was however difficult as many of them are migrants from Bihar, Tamil Nadu and West Bengal and prefer to hire the rickshaws instead. For many, it’s a seasonal job since they go off to their native villages during the harvest season. Also, raising the money was a difficult proposition. With no credit-worthiness, banks were unwilling to give loans.

But Mehta, who’s basically a management expert, wouldn’t take no for an answer. Initially, he managed to convince a group of 30 pullers. Mehta, along with the Kuhad Trust, which advocates and works on alternative policies for the underprivileged, initiated the Apna Rickshaw Apne Naam Yojna. Under this, the pullers could own their vehicles in six to eight months. This was done through microcredit apart from a subsidy from the Kuhad Trust. The cost of a rickshaw is Rs 6,175. Initially, the 30 pullers made a down payment of Rs 500 followed by a contribution of Rs 20 per day. Within 244 to 284 days, they had their own rickshaws. As many as 379 pullers are now owners. And every month around 25 more are being added to the list. Says Salim Ahmed, who plies his rickshaw in the city’s congested Ramganj area: "I got to know of this unique scheme from others who benefited from it. So I met Mehta, who inspired me to be an owner. I am definitely better off now."

In 2005 a survey conducted by the Poddar School of Management indicated a definite improvement in the condition of the pullers. Mehta also felt the rickshaws, which weigh around 90 kgs, could be made lighter. So a New York-based company, International Transport Development Programme (ITDP) along with IIT, Delhi, was engaged to design lighter, low-cost and efficient models.

They developed a new model which weighs 55 kg and is hugely popular with the pullers. It’s currently being produced in Jaipur.

Deepak Saxena, who oversees the project, is awed by the former IAS officer’s steadfastness towards achieving his goals. "His singlemindedness is a lesson for all of us. He gets things done and that’s his USP."