Will big-ticket, wall-to-wall tourism reclaim Thai sands? Or will the tsunami force a return to innocence as it were? 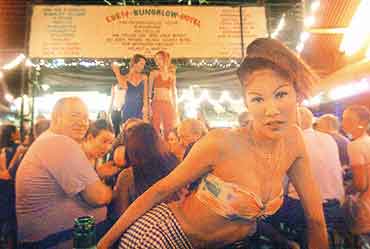 outlookindia.com
-0001-11-30T00:00:00+05:53
When the giant tsunami waves lashed the coastline of Thailand last month, it had seemed to me that the angry sea wanted to wreak vengeance against the tourist tsars who had destroyed the pristine beauty of the country's islands through their dollar dreams and sex for money. In those good old days, when I'd go there, the island of Phuket would boast miles of golden beaches, marine blue-green waters, and barely any of those from the chattering classes. There weren't those seaside resorts offering rooms on websites, nor anyone around to teach deep-sea diving. Phuket was the port of call for hippies. They enjoyed most things free—the sun, the sand, and the marijuana joint they were willing to share; sex, of course, was free and consensual.

In the first week of the tsunami tragedy, the tourists on Thailand's beaches of sin—Phuket, Pattaya, Samui and Samet—were all driven away to the mainland. Only the adventurous and old-timers stayed behind; the desolate beaches a reminder of the innocent past, minus the ghastly wreckage of hotels and restaurants.

Last week, I dialled hotels dotting the island of Phuket. They said, yes, the tourists were returning, but only in trickles. Occupancy was down to 30 per cent of what it should have been for this time of the year. I then called hotels in Patong, Phuket's most famous beach where tsunami waves were the most ferocious. They reported just 10 per cent occupancy; they said there were just a few out soaking in the sun. The beach could as well be yours, as it used to be.

Their tremulous voices reminded me of my own visit to Phuket 35 years back. Its beachfront was untouched, even primeval. You didn't have seaside hotels or bungalows; you stayed in cheap digs in Phuket city, 35 km away, and travelled every day on jeepnies (small jeep buses) to the sea shore. Phuket was then a hippy paradise. "It was a must, an essential stop for any backpacker travelling across Asia," says Brian, a former US GI who fell in love with Thailand in the early '70s when he was here on R&R (rest and recuperation) during the American war in Vietnam.

It was in Phuket that hippies from around the world crossed each other on their Asian trail and shared tips on places that the nine-to-five, genteel, 'straight' people wouldn't have heard of. These were Nirvana's boroughs, idyllic pockets of bliss and happiness. Phuket became fashionable among the hippies. "The main attraction was the readily available, cheap drugs. You came to Phuket to chill out and get high," recalls Brian. The hippies did not take the jeepnies to the city; they slept on the beach inside a wire-fence compound for the princely sum of five cents.

Ten years later, I was back in Phuket. The Vietnam war was long over; the hippie culture had become more a subject of academic analysis than lived as an alternative lifestyle. And Phuket had been discovered and claimed for those in business suits looking for a break. I didn't take the jeepnie from the city to the beach; I stayed in one of those countryside bungalows dotting the island. A major German travel company, Neckerman, was already building a big hotel.

I should have known Phuket's fate. As the '80s saw an economic boom in Thailand, and the country was wired into the global market, Phuket was packaged as a tourist hotspot. On its veritable virginal beaches mushroomed hotels, beachfront stalls, restaurants, night clubs and brothels. With Bangkok emerging as Asia's sin capital, the sex-for-sale culture had to be taken where foreign customers were.

Soon this is what Phuket became known for. The main drag at Patong was more like European resorts in Spain and Greece, only sleazier. In its night clubs, sexual preferences could be catered to—and satisfied. You could get as kinky as possible.You could have the boys, and you could have women of just about any nationality. The European men flocked here for the surf and the sex; it was cheaper, it was also anonymous. Nobody judged you because everyone was here for the same kind of fun. 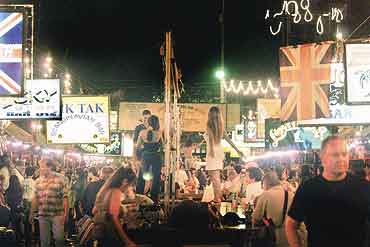 Phuket no longer remained distinctly Thai. Even the food became western, as did the music and the beer. The few Thais found here were almost always young women clinging to older, fatter and despicably drunk Western clients. Its ambience an interminable drunken party the year round. The collapse of the Soviet Union saw the Russians monopolise the Pattaya beach, offering Russian and East European prostitutes at upmarket rates. And with them, over the last 10 years, followed incidents of gangsters slaying each other.

The rising cost of holidaying drove the backpackers (aka 'low-end tourists') out from Phuket. They found their paradise in Ko Samui and Ko Samet. But it was no return to the hippy insouciance; Samui became poor man's Phuket. "The full-moon parties on Koh Phang Ngan near Samui are raves, and are touted as the world's largest beach parties with sex, drugs and rock and roll," says journalist Dominic Faulder, who has been living in Thailand for years. Author Alex Garland dramatically romanticised the backpacker's lifestyle in The Beach, and Hollywood made it into a film.

But it wasn't just the drug high that transformed the beaches into sex paradise, it was the Thai attitude towards its prostitutes. They didn't frown upon it as in most countries; they almost treated it as a legitimate occupation. There are nearly a million women working in the flesh trade across the country. In the last 10 years, though, activists have been campaigning against sex tourism, citing this as an important factor behind Thailand's high rate of HIV infection.

But ask the local Thais and they will criticise the activists more than the sex tourism. And why not, considering tourism alone provides direct employment to about 1,00,000 Thais, most of whom migrate from the poorer northeast areas to the beaches. I meet Lan, who rents out umbrellas to tourists along the southern part of the Patong beach. He tells me he has been working here for more than two years and remits most of his money back to his family in Issan. "It's the first job I have ever had since I graduated from school in 1998," he tells me. He doesn't mind the sex tourism one bit, he has a vested interest in keeping it alive.

The government, though, has already had other ideas. The campaign of the activists and its own changing priorities had prompted a conscious repackaging of Phuket's attractions. Thus, you were offered deep-sea diving around the beautiful coral reefs along the Andaman Sea, and yachting and golfing. In the past few years, Phuket was also emerging as a regional medical centre, offering overseas clients plastic surgery of international standards at lower prices. Before the tsunami, the local authorities were also planning to make Phuket a shopping destination, catering to visitors from around Asia.

The clientele consequently, Faulder tells me, had begun to change in the last few years. "It's clear that some people come only for sex and drugs, but there are also others who are genuinely seeking the sea, the sun, the culture, and shopping. The latter are certainly in the majority these days. That was particularly evident around Phuket and Khao Lak prior to the tsunami," he said.

Herein lies the irony. A month after the tsunami, it isn't the upmarket tourist but the backpacker who is coming back. And he wants his beaches as he once knew them. A wave from hell may have returned him his paradise. At least, for now.

'I Decided Within A Day'