Be In The Wig

A hidden camera catches a magistrate taking bribes to issue false warrants. How hungry are our legal eagles? Updates 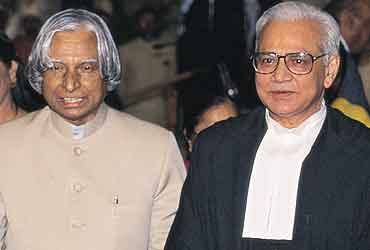 When the tapes were submitted to the Supreme Court by Shekhar, the judges were astounded. "If this is the state of affairs only god knows what will happen to this country," Chief Justice Khare remarked. The apex court has directed the cbi to investigate the matter and submit its report by February 6. In Ahmedabad, the Gujarat High Court has placed the magistrate under suspension. Cases have been registered against the three advocates who helped organise the warrants.

The modus operandi of the sting operation was simple: the journalist filed a complaint before metropolitan magistrate M.S. Brahmbhatt of court number 10 in Meghaninagar, Ahmedabad, stating that the President, the Chief Justice, the Supreme Court judge and the former president of the bar association, all residents of Delhi, were involved in a case of fraud and cheating. The journalist then paid Rs 40,000 through two local lawyers to get the warrants issued. The magistrate issued the warrants on January 15, returnable on February 17. The complaint did not mention the designations of the accused but had correct addresses.

The public interest litigation, on behalf of the journalist, was filed before a bench headed by Chief Justice Khare in the Supreme Court by senior lawyer Harish Salve. He submitted the original tape of the sting operation, an edited copy of the recording, the four criminal warrants, a certified copy of the warrant order and the original receipts issued by the court.

The case is illustrative of the state of affairs in Gujarat with a powerful section of lawyers and government pleaders calling the shots in the lower courts. "This case has hit the headlines only because big names figured in it, otherwise the presence of unscrupulous lawyers in all courts is a sad reality, which the common litigant faces everyday in our courts," asserts Yatin Oza, president of the Gujarat High Court Bar Association.

Some of the lawyers were so upset with the media that they attacked journalists who had gone to the metropolitan court to follow up on the case. A Zee TV cameran was injured when he was set upon by a group of 50-odd lawyers.

It is no secret that several lawyers have made it a full-time business to fleece litigants and get judges to issue favourable orders. Names of several lower court judges, guided by lawyers, fly thick and fast in the court corridors. Many lawyers, pleading anonymity, told Outlook of four ways that are commonly employed. If the litigant knows the magistrate he may get favourable orders; the court staff, like the peon, the court clerk and private secretary of a magistrate are used by lawyers to influence a case; if the lawyer has a personal rapport with a magistrate he may get orders favourable to his clients and, finally, the police and the lawyer nexus misguides the judiciary into issuing orders favouring one side. Currently there are at least four lower court judges under suspension on various charges.

Most lawyers are hopeful that the Brahmbhatt case may lead to some introspection within the legal system and that the Supreme Court court will put in place some mechanism which makes the judiciary more accountable.