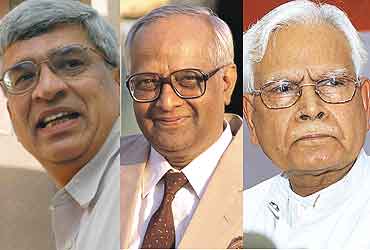 outlookindia.com
-0001-11-30T00:00:00+0553
By the time you get to read this story, a new external affairs minister of the Congress-led United Progressive Alliance (UPA) would probably have assumed office in South Block. In the eight years that the Congress has been out of power, the world—as also the dynamics of India’s foreign policy—has changed dramatically, raising concerns that the party could well be out of sync with the new global reality. This has sparked speculation that the new government’s foreign policy could be different from that of the NDA’s.

Several factors have prompted such speculation. For one, the Congress rhetoric during the election campaign denounced Prime Minister A.B. Vajpayee’s propensity to snuggle up to the United States. Second, the sheer arithmetic of the new Lok Sabha has rendered the Congress-led government dependent on Left support. Perceived as anti-US, and not quite inclined to stay quiet on issues close to its heart, the Left, some fear, could goad the Congress to walk the path it reserves only for election manifestoes and seminars. And then there are those old and venerable Congress warriors who earned their spurs during the Non-aligned Movement (NAM) but continue to influence the party’s policies in this era of a unipolar world in which best interest is decidedly self interest. Couldn’t they and the Left together lead India to flounder in the swirling eddies of international diplomacy?

This question acquired a new salience at the time the Congress released a document weeks before the election. Titled Security Agenda: Issues before the Nation (Security, Defence, and Foreign Policy), the Congress catalogued in it what it thought were the BJP/NDA failures. They were:

Some of these sentiments are quite dear to the Left. Says CPI(M) politburo member Prakash Karat, "Basically, a course correction is required. The Vajpayee government had tied India’s foreign policy to America’s strategic goals. It was getting dangerously tied up to the US. We want to revert to an independent foreign policy. In South Asia we should not be seen to be acting as the chief agent of the US. The new government has to make its policy clear on Iraq. Bottomline: End of American occupation there."

The Left also doesn’t want to endorse Washington’s policies just because New Delhi can’t prevent George Bush from pursuing them. As Karat points out, "Vajpayee was the first to welcome NMD (National Missile Defence). We are not for NMD nor for talks about it." In addition, the Left wants a change in New Delhi’s West Asia policy. Under the BJP, because of ideological and pragmatic reasons, Indo-Israel ties had flowered in the international climate of Islamic terrorism; both saw themselves as its victims. Of course, it was the Narasimha Rao regime that inaugurated this pragmatic phase of Indo-Israel ties, but the Left balks at this bonhomie. Says Karat, "The tilt towards Israel should end. We don’t want any strategic tie-up with Israel. We want active sympathy for the Palestinian movement."

This throws up a curious mixture of potential linkages. For instance, instead of flaunting its global pretensions, a malaise the BJP suffered from, the CPI(M) would want India to "make South Asia the primary focus area". Islamabad, in particular, should feel enthused about the Left lending its shoulder to keep the UPA afloat: it was they who had opposed the BJP’s decision to sever ties with Pakistan post-Parliament attack.

Continuity will be the theme of Indo-Pak relations. The initial statements of Sonia Gandhi, Manmohan Singh and K. Natwar Singh bear this out. The Congress document promises to pay "particular attention to fashioning a stable, working, cooperative relationship with Pakistan". Diplomatic sources confirm that no request had been made till Thursday afternoon asking Islamabad to shift the dates for initial talks on nuclear confidence-building measures, slated for May 25 and 26. Indeed, the Congress foreign policy document promises "initiative to have credible, transparent and verifiable CBMs in treaty form to minimise the risk of nuclear and missile conflict with Pakistan or China".

Ironically, J.N. Dixit, the vice-chairperson of the Congress’s foreign affairs cell, was recently reported to have declared in Hyderabad that India’s policy towards Pakistan should be in tune with that country’s (hardline) attitude, and even accused the NDA government of "missing the opportunity to cross the LoC that came up after the terrorist attack on Parliament".

Such sentiments may well be misplaced. "Some degree of posturing during the time of election is expected. But basic contours will remain intact," asserts a diplomat who says the Congress has vowed to "infuse Indian foreign policy with political realism and calibration, making it reasonable to changes in international situation and global power equations".

‘Political realism’ is the term Natwar Singh, tipped to become foreign minister, invoked to allay apprehensions of any dramatic shift in India’s relations with the US, Russia or China. In his first interview post-results, Singh said, "We are for the closest relations with the US."

Diplomats familiar with the Arab world confirm there is enthusiasm at the prospect of a government that has a well-established foreign policy tradition towards the Arab world. One of them says, "The BJP-led government had a blind spot in the region—they believed that all the region right up to Morocco was painted green and was anti-India and pro-Pakistan. The Congress has no such baggage." But it is unlikely that India’s possible new overtures in the region will introduce political friction with Israel. For, it’s the Congress which is credited for laying the foundation on which the current defence-dominated relationship with Israel is built.

In contrast to its predecessor, the UPA government will also focus sharply on improving ties with the neighbours. Often prone to mistaking its light weight for heavyweight, New Delhi under the NDA tried to play for the global jackpot even as fire raged in its backyard—in Nepal and Sri Lanka. As a senior diplomat points out, "A general sense of disorder confronts us in the region. Each of these is localised and each of these countries will try and engage us more actively, which we will resist." Even before Manmohan Singh could be sworn in as PM, the mdmk chief Vaiko, who has never concealed his pan-Tamil proclivity, had impressed upon him that India should play a more active role in Sri Lanka.

Senior home ministry officials also do not envision any major departure from practice so far as Kashmir is concerned. Says a senior official, "The only change, effectively, would be to broadbase the talks with the Kashmiris. The BJP was moving towards that in any case." Which way will Manmohan Singh go? Will Vajpayee’s Nobel Peace prize dream become his driving instinct too?