A week after celebrating our very own nuanced take on homosexuality -- My Brother Nikhil -- I find myself saddled with Be Cool that turns it into a silly innuendo, a joke. 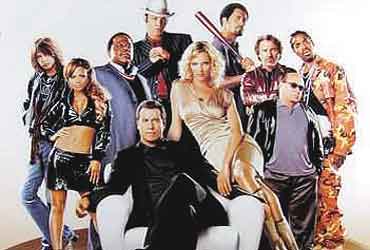 Be it Bollywood or Hollywood, most films believe in sticking with the safety of the formula. So, a week after celebrating our very own nuanced take on homosexuality—My Brother Nikhil—I find myself saddled with Be Cool that turns it into a silly innuendo, a joke. All this through the figure of a gay bodyguard with musical/acting ambitions played by The Rock. Not happening, or is it that I just lack the funny bone because a majority of the viewers around me seemed to be having a lot of fun with the WWF star.

Be Cool is crowded with too many such "small" sidey characters—none of whom, in the course of the film, is able to become larger than the cardboard cutout that he or she starts off as. Not that stereotyping can't be fun but here they lack the colour and fizz to get you hooked. What's even more sad is that each character is played by actors of calibre, be it Keitel or DeVito, which ends up making the film nothing more than a sheer waste of talent.

Leading from the front is John Travolta as Chili Palmer who returns from the popular prequel, Get Shorty (based on Elmore Leonard's book). The Hollywood hitman-producer here is bored of making films and decides to tap into the music industry. He gets into a business venture with a sexy widow Edie (Thurman) and picks up one r&b protege Linda Moon (Milian) from a nightclub. What follows in their quest for making a star out of her is sheer chaos and confusion, lots of slapstick, bedlam and action.

Be Cool thinks that good story-telling is all about loosely stringing together a varied set of characters and scenes. Just like there are too many characters, there are far too many comic tableaus, each lacking in energy. Travolta plays Palmer with smugness but definitely none of his trademark charisma. His jig with Thurman, a throwback to Pulp Fiction, can't work the magic anymore. The film does have some glib lines. Like Palmer preferring the mob to filmdom: "At least they are more honest about being dishonest" or Steve Tyler (of Aerosmith) describing himself as "not one of the singers who will turn up in a movie," while precisely doing that. Sadly, a bunch of one-liners alone can't make a good film.