Indian willows wept bitterly in Kiwiland. Is this the dream team to lift the World Cup for us in South Africa? 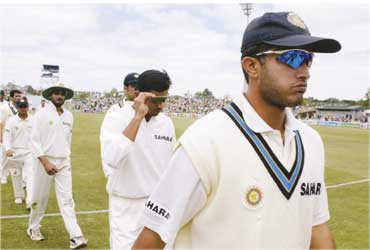 After he put the phone down, Dalmiya must have chuckled. The International Cricket Council (ICC) has said that it doesn't care if he has to walk on a legal minefield but he better send the "best team" to the World Cup. It now seems that the only team India has is a B-team. In New Zealand, on wickets that Navjot Singh Sidhu would say "are like wives, you never know which way they will turn", Indian men showed that they have little understanding of such fickle things. The 'best batting line-up in the world' prodded, missed and looked stupid. In the end, they made New Zealand look good. After losing the Test series 0-2, and the one-day series (1-4 at the time of writing), the Indian team gave the New Zealand media the rare opportunity to comment authoritatively on international affairs. Dominion Post wrote: "To label India the worst cricket team to tour New Zealand might be slightly over the top, considering Bangladesh were here last summer.... India have been shown up as spineless and directionless in the Test and one-day series this summer, which would not be such a bad thing if they did not go round the world parading themselves as the most talented batting line-up in commission." And when Bangladesh toured last, they survived more overs than India in the two Tests they played.

Rahul Dravid was the best man on the job in the Tests on this tour. When that happens, normally the news is bad. It means that the circumstances have demanded grit over flamboyance and labour over genius. The statistically superior Indian batsmen, said to be the most entertaining in the world, fail miserably in such situations except for Dravid who always tours with the circus team but is chiefly the grim security officer and never the stunt master. If the Tests were tragic, India lost the first four one-dayers without ever surviving the 50 overs, scoring an average of 139 per match. All this lays the ground once again for the nervous question that will be asked many times, till the mathematical possibility of such an eventuality is extinguished: Do we look like a team that can lift the World Cup?