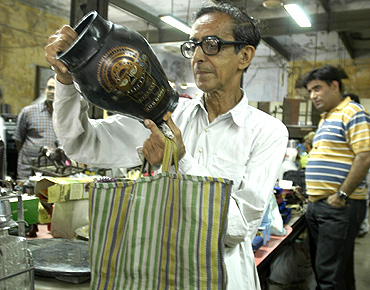 outlookindia.com
-0001-11-30T00:00:00+0553
Last week, I acquired a new addiction. Rousing myself reluctantly on a Sunday morning to go to an auction house, purely for this assignment, I found myself mesmerised by it. The tantalising invitation of the auctioneer to place a bid, the passion with which bids were placed, the low prices at which covetable goods came under the hammer, and the charged atmosphere at the auction hall—all these converted me from observer to eager participant in a matter of 30 minutes. I returned home that Sunday afternoon the proud owner of a carved wooden screen (Rs 875), a beautiful antique glass bottle (Rs 140), an old sitar (Rs 275) and a vintage set of silver cutlery (Rs 410). And I'm sure I'll forego my lazy brunch next Sunday for the greater pleasure of bidding for, perhaps, an 80-year-old carved wooden picture frame or an exquisite old European porcelain figurine.

Not everything up for auction last Sunday could be described as collectors' items. Workaday odds and ends have their space and clientele too. Aftab Alam bought a VIP suitcase for Rs 320. His friend, K.P. Singh, got a commode seat cover and two bicycle tyres for Rs 55, while Lalit Vaswani was all smiles after acquiring a corner settee for just Rs 600. But Vaswani has no plans of placing the settee in his living room, just as Alam's piece of luggage is not for his personal use. They're part of around 100 people who flock to Calcutta's auction houses to bid for everything from broken telephones to four-poster mahogany beds. They're an eclectic mix of scrap dealers, small-time mechanics, furniture dealers, curio-hunters and antique collectors of diverse classes, ages and backgrounds. Every Sunday morning, they hurry to the city's three remaining auction houses on Russell Street—there were eight till a few years ago—to bid for articles they had already inspected the previous day.

Calcutta is the only city in India that holds such weekly auctions. Ironically, this business witnessed its boom when Calcutta was on the decline, and is now facing a lull since things have started looking up for the city. "Auction houses were doing very well when there was a rush among big businessmen, corporate houses, foreign airlines and diplomatic missions to wind up operations here and leave during the turbulent years in the late 1960s and early '70s. We used to sell very good stuff, especially furniture," Arshad Salim, the owner of Russell Exchange, told Outlook. According to Salim, auction houses started coming up in the early twentieth century to sell furniture and other household effects of departing British merchants and officials. Today, the three auction houses offer everything from Victorian statues, colonial furniture, curios, crockery and books to old laptops, electrical fittings and gadgets. The Russell Exchange even auctions old clothes.

Shabbir Rehman, who belongs to one of the oldest and most distinguished families of the city, and is a regular at the Sunday auctions, recalls: "There was a time when auction houses were treasure troves. Furniture from Lazarus & Co, Satsuma tea sets from Japan, chandeliers and much more used to be sold. It was very thrilling to bid for such stuff and win the bid. Even watching the auctions used to be fun. Today, there's a lot of junk mixed in with some fine stuff, that's why you see so many scrap dealers at the auctions." Salim agrees, reminiscing of days when only discerning and well-to-do collectors would frequent the auctions. "For many, the auctions on Sunday mornings were as important as the races. And as addictive as well. Now we only get a sprinkling of that earlier crowd."

Another regular at the auctions is the former rajah of Bankura, K.K. Dutta, who has been attending auctions for the last 50 years. He bids for old furniture, especially intricately-carved teak or mahogany four-poster beds, and has 80 of them at his rambling mansion in Bankura! Salim's sister, Sarfaraz Javed, the auctioneer for the first half of the proceedings from 11 am on Sundays, says three categories of people come to the auctions these days: genuine collectors, those who simply buy at the auctions to sell what they've acquired at a modest profit, and the third who buy prized items, especially furniture, do them up and sell them at substantial profits. 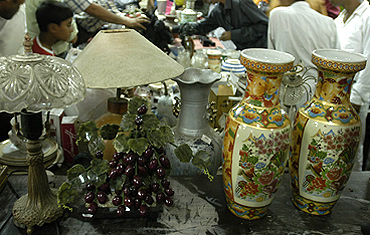 Across the road from the Russell Exchange is Suman's Exchange, set up in 1972, which appears to be more discerning in what it offers. "We don't accept low-value junk. Most of what we sell is high-value stuff, especially curios, silverware, decorative items and furniture. We're also the exclusive auctioneers for foreign missions," proprietor N.K. Bakshi, who is a collector himself, told Outlook. Bakshi says it's still possible to find treasures from old houses being pulled down, people moving out of Calcutta, or landed families who have fallen on hard times.

How do the auctioneers arrive at a reserve price? "We examine the items, assess their value and, if necessary, fix a reserve price. We have to offer the best value to both the owner and the buyer and keep both parties happy, and that's a tough job," says Salim. Bakshi adds that an auctioneer has to gain the trust of both the seller and the buyer and has to be seen as impartial. Typically, auctioneers earn a commission of 10 to 12 per cent of the auction price of an item. "Selling an item through an auction usually fetches a higher price than through a direct sale by the owner," says Bakshi.

Both Bakshi and Salim say that a law enacted a few years ago restricting sale of anything that's over 100 years old has hampered business. "This law makes no sense. A genuine antique is a very rare item that has historical value. A clock owned by my grandfather can't be called an antique requiring registration with the authorities," Salim says. Under this law, anyone possessing any item that's more than 100 years old has to get it registered with the state archaeology department and the department's permission is mandatory for its sale. "It's too much of a hassle for people," said Bakshi.

However, valuable antiques do turn up at these auction houses. It's not always possible, say the auctioneers, to know the age of a curio, painting or piece of furniture. "We go by what the owners tell us if the date of the item to be auctioned can't be ascertained," says Salim. It is for such items that people like Hrishikesh Banerjee and Milli Sengupta make the rounds of the auction houses every Sunday morning. Items that they proudly display in their living rooms and, as Banerjee admits, pass off to their guests as family heirlooms, in an attempt to invent pedigree and entitlement, and one that speaks of closeness to old elegance.