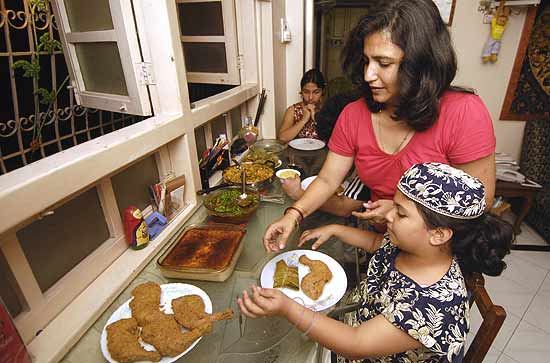 This was the playground rhyme with which Parsi children were teased when I was but a boy. The last two lines would make more sense if one substituted ‘contraceptive pills’ for ‘biscuit’, but that would ruin the rhythm of the verse.

The first line is clear in its implication: Parsis eat crabs, pork, beef, anything. The second line associates them with a vague westernisation—calling for ‘biscuits’ instead of puris or batasa, the jeera-dotted savoury favourites my grandmother would store in glazed china jars. In these, she also stored the bhakra, the typically Parsi biscuit, and the gor-keri noo achaar, the sweetish condiment halfway between a chutney and a pickle, which she manufactured over several days in an annual gathering of the other Parsi women of the mohalla.

There were and are other totemic foods—the dhan daar machchii (white rice, plain tadka daal and fish marinated in red chillies, turmeric and salt and then fried), considered a birthday special, and dhan saak, browned rice with the meaty daal made with mashable, dissolved vegetables, for family gatherings on a Sunday—but we were free from the taboos that our Muslim, Hindu and Sikh friends observed.

Parsis are blessed with the mange tout precept of the religion. One ate pork with the Christians and beef with the Muslims, though our household and others respected the sensibilities of, for instance, a Muslim cook, by not getting him/her to fry the bacon or curry the pork. Parsi weddings are the closest thing to the feeding of the multitudes, and guests notoriously attend not to bear witness to the vows, comment on the beauty (or otherwise) of the bride, or show off their jewellery, but for the five-course (or more) meal that the gathering, often of hundreds, is served after the ceremony. 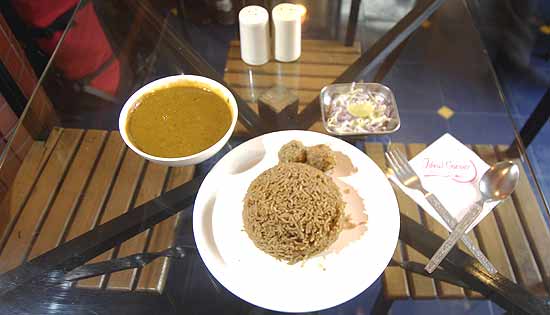 Parsis perch or poach eggs on most things—one can have papeta par eida, bheeda par eida, kheema par eida, bhaji par eida, tambotaan par eida, which in turn mean: eggs on potatoes, okra, mince, spinach, tomato and almost anything else. Ideal starters for the wedding banquet (and, while on the subject of eggs, the curried, scrambled, coriandered breakfast dish akoori is far superior to what our Punjabi compatriots call bhujiya), to be followed by sali-boti, sali-marghi, lamb (goat, actually) or chicken cooked with slender, fried potato straws and/or with lugan no sahs—fish, usually pomfret, surmaai or ramus in a gently spiced, sweet and sour sauce—or patraan ni machchi,  pomfret baked in banana leaves with a grated coconut chutney. All that is then followed by Parsi pulao, our version of biriyani topped with the definitive Parsi dhan saak daal.

Parsis put eggs on top of everything—potatoes, okra, tomatoes! But there’s more on the plate than just that.

The Zoroastrian ethical code, so refreshingly free of taboos, can be precised in the phrase ‘humata, hukta, huvareshta”: good thoughts, good words, good deeds, which irreverent Parsi humour has inevitably turned to ‘good eggs, good fish, good meat’! There are more raucous interpretations. My Torontonian relative, Rustom Immoralearningswalla (also known in Mumbai as Russi Bhadwa), used to transliterate the Avestan ethic as ‘good sex, good drugs, good rock-and-roll’, but his interpretation runs into the difficulty that Parsis are not reputedly outstanding in these particular fields. There may have been a few renowned ballroom dancers and certainly Farokh Balsara, aka Freddie Mercury, cut a neat caper, but the only drugs associated with Parsis are painkillers for arthritis. And as for sex, there’s the old joke: One Parsi says to another, “My wife’s pregnant.” “I am so sorry,” says the other. “Whom do you suspect?”

The earliest culinary Parsi enterprise in English literature is Kipling’s Parsi from the Just So Stories who bakes cakes: “It was indeed a Super Comestible...and he baked it till it was all done brown and smelt most sentimental.” I can’t think of a better adverb to characterise the ‘maava na kek’ one may buy in Zoroastrian bakeries, but there are also Parsi dishes that smell far from ‘sentimental’. There are the various recipes for dried Bombay duck, that, cooked properly, would give the most mature Gorgonzola a run for its money. Its odour has emptied whole neighbourhoods in western India. These fish, called ‘duck’, are actually eels, and can be marinated in masala and fried, as in tharela boomla, or can be turned into the supreme hot, sweet and sour sooka boomla no patio, usually eaten with khichri, the universal staple of the Indian indisposed,  but in this context raised to the unique and nationally enriching offering of Parsi cuisine.

(Poona-born Farrukh Dhondy is a UK-based writer, playright and journalist.)