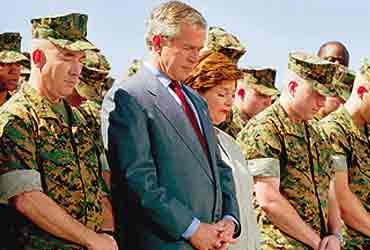 outlookindia.com
-0001-11-30T00:00:00+0553
In a football metaphor instantly recognizable to Americans, President George Bush declared last week "we will now go the last 200 yards" to Baghdad as US troops tightened the noose around the Iraqi capital for the final assault. Defence Secretary Donald Rumsfeld added characteristically, the army was within commuting distance -- closer "than many Americans are from their downtown offices." The prize of Baghdad may not be as easy as a typical American's commute to work but there was no denying that US forces had made swift advances, suffered few casualties and were within a few miles of the city. Shells were falling on the Saddam Hussein International Airport on the outskirts and the "dagger was clearly pointed at the heart of the regime," said Brig. Gen. Vincent Brooks in Qatar. For the first time in two weeks Baghdad was dark and the Americans had the momentum.

Incessant questions about the war plan were drowned out by the "good news" of a daring rescue of injured Pvt. Jessica Lynch from an Iraqi hospital and the feeble resistance by Iraq's elite Republican Guards. It was dubbed a reversal of fortune. There was even a kind of welcome by the people of Najaf for the conquering battalions, a long-predicted gesture that had eluded the Americans so far. And when the chief Shia cleric asked his people not to "interfere" with US troops, it was a major psychological breakthrough for Washington. Pentagon said at least two of the three Iraqi divisions south of Baghdad were rendered "battle ineffective" and others appeared to have retreated into the city. A long column of burnt Iraqi armour, including the incongruous motorcycles, was proof of the decimation. In the15 days of this war, the US has unleashed 725 Tomahawk missiles and 12,000 precision bombs in an avalanche of heavy metal. An estimated 1,000 of Iraq's 2,500 tanks have been destroyed since the attacks began. The Iraqi regime is on the verge of imploding, the pundits predicted. But Gen. Richard Myres, chairman of the joint chiefs of staff, warned that the most difficult battle still lay ahead -- urban warfare, more civilian casualties and a possible humanitarian disaster with 5 million people without water or electricity.

The biggest battlefield dilemma for US strategists remains -- whether to continue the push before reinforcements arrive or dig in for days and break the will of the regime from the outside. The disappearance of the Republican Guard was puzzling to US officials, triggering theories and scenarios by the dozen. Rumsfeld said that some had surrendered, some were fighting while others had abandoned their defensive positions south of Baghdad to disappear into the lanes and by-lanes for a grinding war of attrition. It would be their last stand. Hundreds of special forces and CIA operatives were expected to assess the fragility of the regime and report back. Gen. Myres said US forces intended to isolate the remaining Iraqi resistance across the country by hemming in the regime and destroying whatever remained of its command and control. But he stressed that "the idea of a siege is not the right picture." He has talked about tactical surprises that may still come. The Iraqis could spring their own surprises with traps to lure US troops into their urban sanctuaries, inflicting heavy casualties on both civilians and soldiers.

The successes have come partly as a result of a tougher stance by the Pentagon in the face of suicide bombers and the apparent use of Iraqi civilians as human shields. US soldiers were ordered to shoot at sight if vehicles didn't stop, maintain their distance even from children and order young Iraqi men to strip before surrendering. Deaths of civilians were always secondary -- if mentioned at all on TV-- to the technological wonders on the battlefield. While trying to stay "on message," the Washington PR machine turned full throttle to demonize the enemy. "Indeed, Saddam Hussein has killed more Muslim people than perhaps any living person on the face of the Earth," declared Rumsfeld. The Pentagon has relentlessly painted the Iraqi forces as "thugs" and "Gestapo-type" desperados.

The US strategy is to maintain the psychological pressure on Hussein and whatever remains of his military. The constant message: the government is finished and Washington will not negotiate with anyone even as reports surfaced about Russian efforts to broker a deal. "There's not a chance that there's going to be a deal. It doesn't matter who proposes it, there will not be one," Rumsfeld said flatly, adding that it would only lead to "16 or 17 more resolutions." The confidence once again was overflowing as US troops sat poised to fight the big battle for Baghdad.

The advances last week took them deep into the "Red Zone," the region around the capital that is said to be within range of Iraqi artillery and surface-to-surface missiles that can carry chemical weapons. The absence of chemical weapon attacks has been something of a mystery. US officials offer several reasons why Iraq has refrained from using poison gas -- the air strikes may have blasted the artillery units for mounting chemical attacks or warnings about being branded as war criminals may have deterred the Iraqis or Baghdad is simply holding back to press its claim it doesn't have any.