That's Tendulkar, with brilliance on the field and modesty on his sleeve 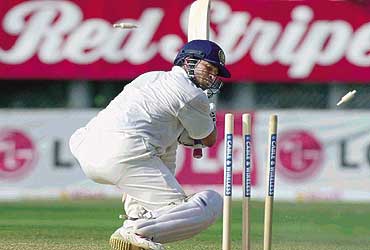 Sachin Tendulkar—Masterful
By Peter Murray By Ashish Shukla
Rupa Rs 395,Pages:168
It is odd for a former CEC to write on cricket and Sachin. But I have some qualifications to do so. I was a small-time cricketer and a fairly mean left-arm medium-pace bowler, though nothing like Wasim Akram! And of course, I followed Bradman’s English tour in ’48 as a schoolboy. I remember them all—Lindwall, Miller, Vinoo Mankad, Mushtaq Ali, Lala, Bishen Bedi.

It is a bit daunting to write on Sachin. He is India’s number one feel-good factor. There is so much bad news and yet in far-off West Indies, when this compact, composed ball of fire walks out, every Indian’s blood pumps a little harder. At his first authoritative off-drive, or pull off a good length ball to the midwicket boundary, children cheer, elders glow, and wives even smile at their husbands. Apna Sachin.

There are many great Indian cricket heroes. I remember the Lord’s Test when the headlines said "Vinoo Mankad against England". He almost won the Test by himself. Vijay Hazare’s two centuries against Lindwall and Miller in a Test in Australia cannot be bettered. Gavaskar has ground every batting record to dust. The pack hunting of Bishen Singh Bedi, Prasanna and Chandrashekhar had to be seen to be believed. But all of them pale besides Tendulkar. No wonder Viv Richards says: "He is blessed—I would say he is 99.5 per cent perfect." And Brian Lara admits, "Sachin is a genius. I am a mere mortal."

The man has such a complete mastery over technique that he makes it all look so easy. He already has 29 centuries and is bound to go up to 40 or more. But two things have to be kept in mind: his 29 centuries are from about 100 Test matches, some against indifferent sides, allowed Test status for dubious ICC voting reasons. (Bradman’s came from barely 50 Tests, all against world-class teams); and his batting average against Pakistan and South Africa is somewhere in the 30s. Besides, the situation today is in the batsman’s favour. Easy pitches for the crowd’s entertainment with a batsman padded up and face guarded like knights of the middle ages—it is impossible to recognise Sachin in the field except by his batting. When Hazare, Gavaskar and Amarnath batted with thin rubber gloves and cloth caps they faced fast bowlers hardly seen today, on wickets which had not been killed. Seen by the averages against the best in serious games, Sachin is only a shadow of Bradman. As for heroic batting, Steve Waugh has the edge on him.

In this book, which is a generally hagiographic record of his matches and scores, what I enjoyed reading about was his human side. The man deserves praise for keeping his head in spite of all the adulation and money. He is from a middle-class Maharashtrian family with high values. He has held on to them and to the friendships of his neighbourhood—always a good indicator. He’s a calm, dignified and modest man, in contrast to many of his colleagues. The money has not gone to his head, though I worry about him doing too much advertising. Today in the Indian team, a few are crorepatis while the Sunder Das-es scrape by. This must have a psychological impact on the team’s dynamics.

Sachin is a genuine all-rounder. His bowling is always a surprise, and always unpleasant for opponents at critical times. Indians can’t be praised for good fielding. In fact, when we look at the averages of our batsmen, we should also look at their dropped catches and lost matches. Dravid and Laxman are great batsmen of different styles and their average is praised but has anyone computed the number of dropped catches in the slips and the lost matches? Should they not be held responsible despite their batting scores? The poor Indian bowlers can only take wickets by the occasional clean-bowled or some kind of LBW. He must sometimes feel like pulling out a stump and hitting the batsman on the head. How else to send him out? Here again few people notice Sachin’s excellent fielding and good catches.

Finally, the man is not a bore. When he is on the field there is thunder and lightning in the air. Gavaskar holds every conceivable record in the numbers game. But those of us who lived through the years of his batting are glad it is all in the past. Centuries were scored, but how many days did each one take? How many possible Test wins were given the go-by, as long as one more personal milestone was achieved. That is why Barry Richards says "Tendulkar is an entertainer—too often boring players have been pushed forward as great by figures alone." Sachin is a team man and he always wants to collar the bowling. When he is at the crease, the sun shines.

As a captain, however, he was not too successful. Perhaps, it was the Maharashtrian clannish habit, unlike Bedi’s ebullient Bara Bhaji attitude. The question also remains: did he not unfairly black-ball Mongia, our best wicketkeeper batsman?

But Sachin is that rare Indian hero badly needed for our sinking morale. The book is ideal for the worshipping masses, and would go well with their tea and samosas.

'There Is Overlap, But No Conflict'