Peaking at the right time is most crucial 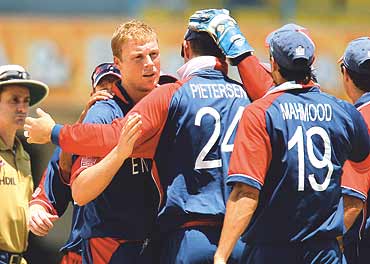 outlookindia.com
-0001-11-30T00:00:00+0553
The Super Eights almost halfway through, three of the four semi-finalists seem to have been decided already. But who'll occupy the fourth spot once Australia, South Africa and Sri Lanka have been ensconced in theirs? The quickest answer is probably New Zealand, but that would mean discounting England altogether, and I am still not prepared to do that, the Lanka loss notwithstanding.

They played pathetic cricket in the past few years, and just when you thought the team was beyond redemption, what did they do? Won three successive games against the mighty Aussies in Australia, that's what. Not for nothing do these blokes remind me of the Pakistan team of old—unpredictable, dangerous and exasperating.

Some of them—James Anderson, Ian Bell, Jon Lewis, Paul Nixon and Liam Plunkett—have had their wrists slapped for their drinking binge, and Andrew Flintoff, of course, has been stripped of his vice-captaincy and was suspended for one match. The reaction in England has been severe, with the players in question being castigated by press and public alike, and they have certainly had their share of public humiliation.

Without making excuses for his behaviour, I'll give credit to Flintoff for being genuinely contrite and admitting he was wrong. I've never been a drinking man myself, but I see nothing wrong in a drink or two after work or play. That a drinking spree is unacceptable at all costs goes without saying, and Flintoff appears to have realised that. No matter how good a player you are, you cannot play any sport without sleep, and to be awake and drinking at 4 am when your match begins at 9 am is eminently punishable behaviour.

And it is because of this incident that I think Flintoff in particular will want to put things right. He dare not repeat his excesses because his image has already taken a beating. Nevertheless, England's game still revolves around him; he's the catalyst for the team. Other sides are wary of him because he can make things happen in the middle when the going gets tough for England. And it has too, the loss against Lanka having done them no favours.

As Michael Vaughan said, England have only played at about 80 per cent of their potential thus far, so he obviously expects more out of his team. This means the team needs to peak, and fast, for all their remaining matches are now crunch ones—South Africa being the most crucial.

Peaking at the right time is of paramount importance in a tournament of this length, I cannot state the importance of this factor enough. The four form teams—Australia, South Africa, Sri Lanka and New Zealand—have been playing some good cricket and all four look like they can win the Cup, but what if one of them peaks too soon? When I talk of a team peaking, I mean the ideal state when all the players are playing well, and the team is not dependent on one or three individuals to get them a win. Australia, for instance, have got by thus far largely thanks to Matthew Hayden and Ricky Ponting's feats with the bat, which means chaps like Michael Hussey and Andrew Symonds have not been tested really. Knowing Australia, I would expect them to engineer a situation where these two have more to do with the bat, to guard against the eventuality of them failing to take up the slack should the top three fail.

Ditto South Africa, whose middle order has not really got going, probably because it didn't need to, with Graeme Smith and A.B. de Villiers doing most of the work at the top. In a one-day game, where one has to play one's shots and create scoring opportunities, it is almost a certainty that even the best will fail now and then. The two teams that have distributed the load pretty evenly so far are New Zealand and Sri Lanka. That gives them the confidence to take on all comers. For England, even their victories have been unconvincing. Their top three must fire now if they want to stay alive in the Cup. And then, with proven matchwinners like Pietersen, Collingwood and Flintoff in their ranks, they have to believe they are in with a good chance of making the last four.

Rules Of The Roulette