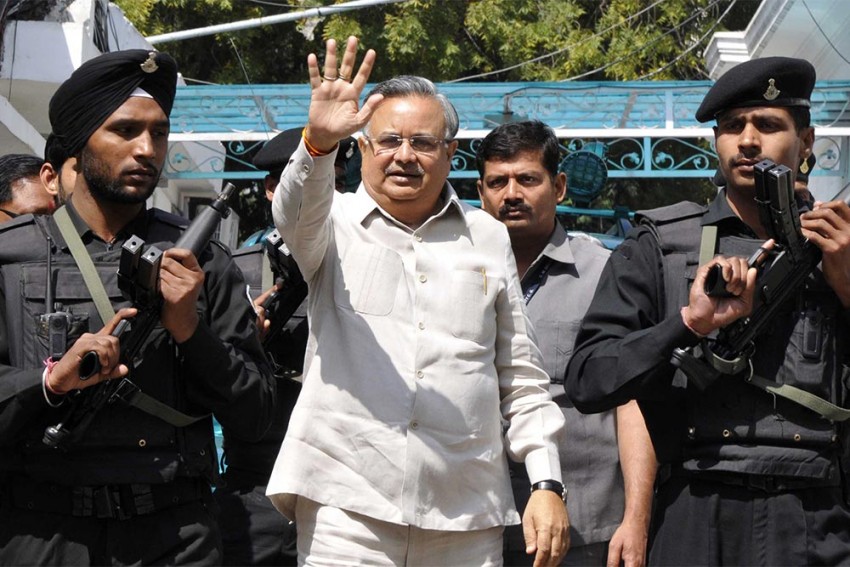 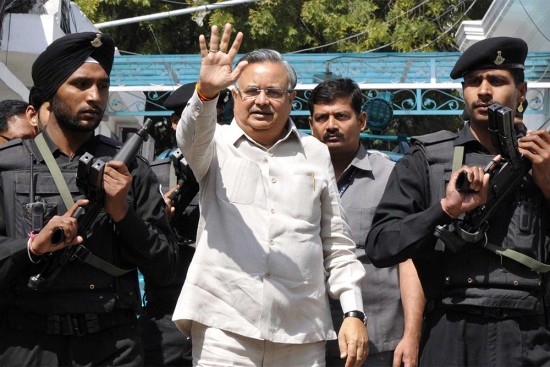 Chhattisgarh chief minister Raman Singh, last year, requested the union home ministry to send Nagaland Battalions to his state to fight Naxal insurgency. In 2006-08, he had seen the effectiveness of the northeastern state’s Indian Reserve battalions in taking on Naxals in Bastar region. Their skills in jungle warfare, survival tactics and toughness impressed Singh. However, things took time to move, prompting him to go for the creation of a similar force from within the state—the Bastariya Battalion. The CM talks to Bhavna Vij-Aurora about his plans to make Chhattisgarh Maoist-free and a tie-up with Google to take technology to the heart of Bastar.

You are raising a Bastar Battalion to fight Naxals. Why?

We are raising a fighting force, inducting the local youth from the state’s three districts worst affected by LWE (left-wing extremism): Sukma, Dantewada and Bijapur. It will be the first of its kind in the Central Reserve Police Force (CRPF). Being locals, they will have the advantage of familiarity with the terrain.

Are they the new Salwa Judum?

"People are beginning to trust the government. The Maoists are now nervous, faced with questions like 'Why are you destroying our bridges, hospitals...?'"

No. They will be part of the CRPF. Though raised from the region, they will be deplo­yed all over the country. They will get  CRPF training along with specialised training in jungle warfare and guerilla warfare. The advantage in training local tribal youth is they are very good at it naturally. We have many youngsters who climb the steepest of mountains without a problem. They have stamina; they are excellent shots and have courage. They don’t turn back.

What about training to the police force? Their training and lack of security at police stations have been a problem…

It is not just the Bastar Battalion; we have prepared our police force also in guerilla warfare. The force is much better equipped to take on Maoists now. They cannot attack our police stations or carry out blasts at will. Basic things have been taken care of. Police stations have been strengthened. The personnel are provided much better training. Earlier, the police personnel were only trained for law and order, danda chalana. Now we are training them in guerilla warfare. It was not in the police manual, but in Chhattisgarh we had to prepare them to take on the Maoists. They had to be as good as the extremists at least.

On the lines of Greyhounds from Andhra Pradesh?

Yes. Maybe not as good as Greyhounds yet, but definitely close. We are giving them high-level training and providing them the infrastructure. They are being trained at the Chhattisgarh Jungle Warfare Training College. At least they should have the confidence of living in the forests. The training helps them overcome the fear of the jungle; not to be scared of snakes and how to deal with them. We leave them in the forests for three days and let them learn to survive there. This has been very successful and is giving us great results.

The police pressure has pushed the Mao­ists to a corner. We’ve achieved 75%  success. Their focus is on a limited area now.

What about police stations?

We have constructed 198 thanas (police stations) at a cost of Rs 2 crore each with the assistance of union government in the last two-and-a-half years. They are better than the office of an SP (superintendent of police). We have constructed another 32 at a cost of Rs 1 crore each. We have taken care of basic things. There are proper security and boundary walls. They are two-storey, and 50 personnel can easily live there.

This is the security aspect. What about developing LWE-affected districts?

This is a fight of faith and not of bullet. The state has taken development, PDS, roads, schools and hospitals to the affected districts. People now believe that we care for them. They are beginning to trust the government. It is only because of development. They are losing the fear of Maoists.

They are now nervous. People are oppo­sing them now, questioning them—why are you destroying our bridges, schools, hospitals, anganwadis…I have fought this for 13 years and we are winning.

But aren't connectivity and infrastructure still a problem?

Work on infrastructure development worth Rs 3,500 crore is going on. It includes roads, railway tracks and also internet and mobile connectivity as part of a Bastar Net programme. Railway connectivity is improving. The 234-km Rowghat-Jagdalpur line is under construction. This was due for past 50 years. Thirty km has been constructed, and a train is already running on that. Work is progressing fast. Tenders have been given. Jungles have been cleared. Land is being acquired. We have to show the train to the people of Bastar so that they know how their lives, and those of their children, can change for the better.

Under the Bastar Net programme, all seven districts of the region will have internet connectivity in the next one-and-a-half years. It is not the same Bastar anymore. Things have changed. When (Prime Minister Narendra) Modiji saw it, he was surprised: “This is Dantewada!” You have to see it to believe it.

There is a residential school for 5,000 children—a Nalanda-like old concept. All tribal children have access to it. There is a livelihood college for 2,000 students, good institutes. It’s akin to a miracle in Dante­wada, Sukma and Ponta. Huge difference has been made to education. A state-run institute called Prayas is helping the children prepare for competitive exams. Last year, 27 children of Bastar were selected in IITs. I gave all of them MacBook laptops. Among them were children of an MNREGA worker, whose parents were killed in Mao­IST violence. The target for this year is 100 children; I'm keeping 100 MacBooks ready.

Hospitals have functioning operation theatres. Doctors have come forward to work there and are doing surgeries. Patients are queuing up at the OPD. It was unimaginable 13 years ago.

Construction of roads is going on in a big way. Roads are being built from Raipur to Dhamtari to Jagdalpur to Konta, and from Jagdalpur to Bhopalpatnam.

Everyone is talking about demonetisation and its impact. How has it affected Chhattisgarh?

The biggest impact has been on Maoists. It is a big step towards ending extremism. Naxals extort Rs 400-500 crore a year in Chhattisgarh. They use these funds to buy their AK 47s and RDX. The money is all over. This will weaken them in a big way financially and they will feel its impact while buying new arms and ammunition and also in planning future activities.

In other fields too, demonetisation has had a very positive affect. All cash is in the market now. As far as going cashless is concerned, we are training 5 lakh people, including panchayats, in cashless transactions. It is only a temporary problem.

You recently visited US to woo investors to Chhattisgarh. In which sectors are you looking for investment and what was the response?

I visited Chicago, New York and San Francisco. I met American businessmen, NRIs and members of the US-India Business Council—and had a good interaction with them. We are looking at cooperation in new sectors, especially technology. I met representatives from Stanford University and Google and discussed the new areas of R&D they are doing. We are interested in tying up in the fields of health and education to take benefits accrued from technology to areas like Bastar (deep south) and Sarguja (upstate).

We have requested Google to work with our teams to create a special health app for us that can benefit people in remote areas. We have to take technology to the areas where there are no facilities. Not just in health but also education.

What is Chhattisgarh’s USP to attract foreign investment?

We want investments in new sectors like IT, technology and electronics. Cities like Bangalore, Hyderabad and Chennai—all US businessmen want to go there for investing—have become expensive with costly infrastructure. There is saturation, too. In tier-2 cities, Raipur is the best. They can consider it as their next destination. We have all the facilities in the state. There are engineering institutes, IITs, ITIs, IIITs, national institutes—and they are well-connected. We will give them land at cheaper rates. Skilled manpower is also cheaper. We tried to tell them all this in our presentations. We also impressed upon the fact that Chhattisgarh is at number 5 in the country in terms of “ease of doing business”. Also, we are well ahead in terms of availability of power, land and skilled manpower.

What about the core mining sector?

We don’t have too much interest in the core sectors like cement, steel, aluminum and power generation. We have done too much in those sectors, and people anyway come for them. We don’t have to invite anyone. Our focus now is more on downstream industries.

What is the state's future in mining ?

Chhattisgarh has iron ore, oxide and dolomite. The future is in diamond and kimberlite. Also, use of coal other than for power generation. We have such huge deposits of coal and are also working on liquefaction and gasification of coal. A big project along with government of India is under discussion.

Our policy is to give mines only to those who will do value addition. If someone is interested only in trading, then we are not interested. People came from South Africa and other parts of the world, but I did not give  the mines for trading.

There is very good iron ore available in Bastar. But for many years, it was being exported to Japan, China and Korea. I even asked the National Mineral Deve­lopment Corporation to do value addition, and forced them to set up a plant at Nagarnar. I told them that you cannot survive just by selling stones. You have to provide employment.

Anxieties Of A Scattered ­Industry