Base Camp For A World Podium Finish 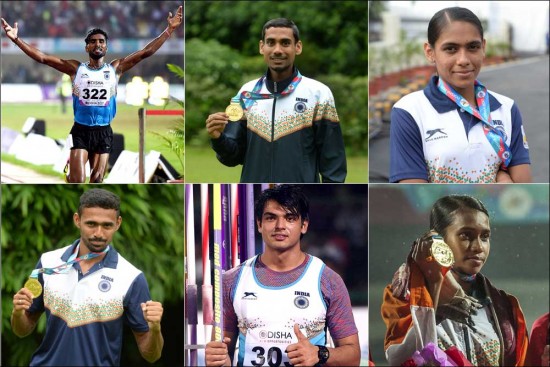 Indian athletes seem to have learnt to be at the forefront, come rain, shine or thunderstorm. After all, they overcame those impediments, besides, competition from their opponents, during Asian Athletics Championships in Bhubaneswar last week to hit the podium an unprecedented 29 times.

Rain left the Kalinga Stadium’s artificial track and field damp, and the resultant humidity hampered athletes’ per­­f­­ormances on all five days. But Ind­ian athletes won enough metal to finish atop the medal tally for the first time ever in 22 editions of the competition. In all, India clinched 29 medals—12 gold, five silver, and 12 bronze—in the 42-nation competition, reason enough to celebrate.

It could have been one more gold, but Archana Adhav, who came first in the women’s 800m, was later disqualified for ‘pushing’ an athlete towards the end of the fiercely contested race. That aberration apart, the championship served as preparation for athletes ahead of the World Championships, beginning on August 4 in London. All gold-winners automatically qualified for London.

India’s deputy chief coach Radhakrish­nan Nair said 36 athletes have so far qua­lified according to criteria set by the Int­­ernational Association of Athletics Fed­­erations, the world governing body. “But the Indian Athletics Federation (AFI) selection committee will select the team,” Nair tells Outlook. That means not all 36 may go to London. AFI secretary C.K. Valson told Outlook that all qualified athletes would have to compete at the 57th National Inter-State Senior Athletics Championships from July 15-18 in Gun­tur, where a final selection would be made.

This has not gone down well. Some athletes who qualified question the rati­onale of being forced to prove...