Barter On The Mount

It's over a decade since the Kinnauris forced India and China to reopen the ancient silk route. But official wariness still encumbers volumes. 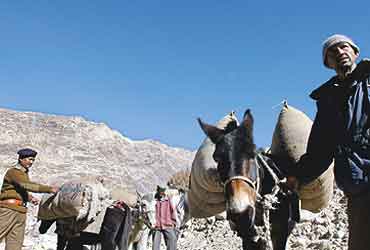 This is thanks to the Kinnauris who forced the two nations to open the highway that was shut for decades. The same month—October 2004—witnessed a nostalgic moment when the commodity that the ancient route was famous for changed hands. A Benaras trader imported raw silk yarns worth Rs 2.71 crore in eight consignments from China. While this indicates the potential, the unfortunate part remains that the quantum of trade is still negligible. This, despite the fact that the route was opened up for both barter deals and trade on convertible currency basis over a decade ago in 1994. Except for rare large deals, the average trade is still just a couple of lakh of rupees every week.

Both India and China are now toying with the idea of opening the Nathu La route on the Sikkim border as well. But there's a growing feeling that if Shipki La's experience is any indicator, such 'friendly acts' are mere paper exercises. The reason: security concerns deter the two governments from officially encouraging the trade. Mutual suspicion at the official level is transmitted to the traders. So, at the end of the day, no one's interested. Except for the Kinnauris on both sides of the border—whose centuries-old trade contacts were interrupted by hostilities—and a war—between India and China in the early 1960s.