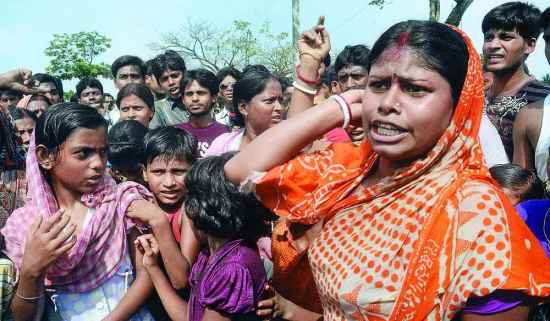 The semi-urban sprawl of Barasat in Bengal’s North 24 Parganas district, an hour’s train ride from Calcutta, has ear­ned notoriety as one of the most ‘unsafe’ zones for women in the state. A senior police officer, one-time SP of the area, told Outlook, “It is a fact that Barasat is a den of criminal activity. But this is not new. First of all, its proximity to the Bangladesh border makes it accessible to smugglers, traffickers and other cross-border crime. Incidents of rape, molestation, eve-teasing and other crimes against women are one manifestation of this criminality. Women in rural Bengal and areas abutting its townships are now at a crossroad—they are no longer homebound but venturing out to schools, colleges and offices. But newly urbanising clusters like Barasat have not kept pace with the concomitant elements of social change, so women who go out are targeted. At the same time Barasat—not far from the upcoming New Town and Rajarhat, sites of endless construction activity—is also where hundreds of labourers stay, many of whom are away from their families. The unsettled demography creates its own social instabilities. It is also a fact that the party in power at any given time makes use of local thugs. It is well-known that political parties use musclemen and contract killers, and in return are given a sense of power and protection, so they think they can get away with anything. Barasat is more prone to this form of power politics and political party-underworld nexus because of the close proximity of many bheries (fisheries), which are lucrative business. Money, power, politics and corruption go hand in hand. The other lucrative business in these parts, construction, is of course known all over the country to forge a nexus between local underworld toughies, businessmen and politicians. The same happened here.