My mission: to meet Raj Thackeray. A pow-wow the CIA was very keen on as part of ‘touching base with emerging leaders’ 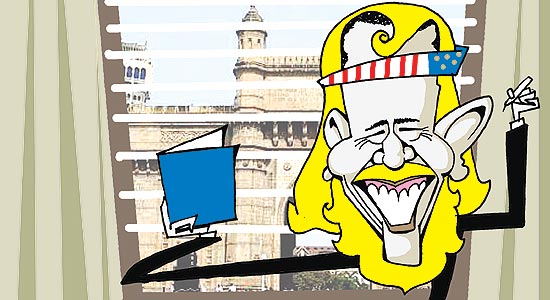 Immediately after the G-20 summit, I took a secret detour to Mumbai. My mission: to meet Raj Thackeray. It was a pow-wow that the CIA was very keen on as part of its ‘touching base with emerging leaders’ programme. So I disguised myself as a hippie (long hair and beard) and made my way to a cafe in Colaba. Raj was to come there dressed like a north Indian (bruise marks and black eye included). And since we had never met, the CIA used a time-tested Mumbai underworld technique to enable us to identify each other. One half of a ten dollar bill was dispatched to Raj. The other half I concealed in my wallet. So jab we met we simply checked whether the torn pieces of the note matched and we knew who was who. “Hello, it’s great to meet you, Mr Thackeray,” I said in my most charming manner even as the men from the CIA hung about pretending to be tables, chairs and giant cutlery. “Rashtrapati Obama, tumhala bhetun apaar anand zhala....Mumbai ani Maharashtrat tumcha swagat aahe (President Obama its great to meet you. Welcome to Mumbai and Maharashtra).”

Though he said it in Marathi, an alien language, I had no trouble comprehending. That’s thanks to the Dell Corporation developing a software which enabled English subtitles to flash across Raj’s forehead. So there the two of us were chatting away.... “If you can understand English why can’t you speak it?” I asked. The answer flashed almost instantly across Raj’s ample forehead: “If you are a Maharashtrian, then you must only speak Marathi. Of course, you are free to hear whatever language is spoken to you. It’s called the heard instinct.” I thought that was clever but to change the subject I said: “It’s great to be here in this magnificent city.” I thought this would put him in a pleasant frame of mind. It didn’t. “Mumbai is great because of the Marathi manoos and not because of the *@&**&@* north Indians.” (The Dell software obviously hadn’t factored in swear words). I was surprised by his outrage. “But I thought Mumbai, like New York, prided itself on its cosmopolitan character,” I countered. “We are cosmopolitan when it comes to Americans (why I hosted Michael Jackson and allowed him access to uncle Bal Thackeray’s toilet). But these Biharis have no place in this city. I will drive them out,” he thundered. One of the CIA guys instantly saw a business opportunity in what Raj was saying and handed me this note: “If he wants to drive them out, he will need at least 50,000 cars. A great opening for Ford.” I was quick to ask Raj if he had any concrete ‘drive them out’ plans and would he be considering a ‘fly them out’ option too.

“I will get back to you on that,” he promised even as he said goodbye. But his parting shot was most encouraging: “Could Dell provide the subtitle service to all Mumbaikars so that they can speak Marathi and hear angrezi?” Now that’s what you call a business opportunity....