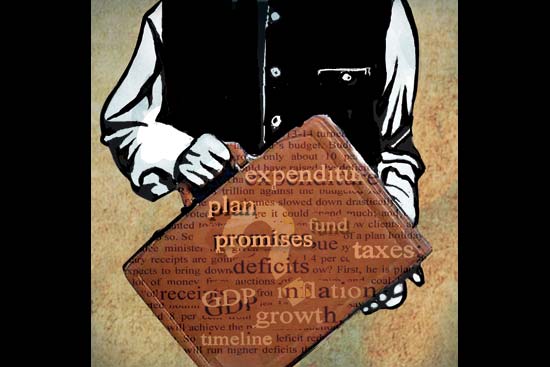 The budget consists of 16 documents. Commentators have to say what they can within hours of its presentation. So they concentrate on what the Union finance minister says, which is just about 10,000 words and is more of a sales pitch than an objective description. The result is a storm of immature reactions that pass within a couple of days. This time it ended even faster because of Mufti Mohammed Sayeed’s sensational remarks. That was a valuable lesson. Next time, when the FM wants to present an unpopular budget, he should keep a Mufti in his briefcase. Now, however, there is time to reflect at greater leisure. I would like to use the time to draw some disquieting implications from the figures.

All the deficit ratios to GDP for 2013-14 turned out to be lower than they were projected in last year’s budget. Budgetary receipts were lower, and nominal GDP rose only about 10 per cent against the projected 14 per cent; that should have raised the deficit ratios. Why did they turn out to be lower? That is because expenditure on the plan turned out to be only Rs 4.68 trillion against the budgeted Rs 5.75 trillion. Implementation of the plan schemes slowed down drastically. The UPA government was voted out before it could spend much; and the NDA government wanted to change priorities and fund new clients, and took its time to do so. So the current year has been a bit of a plan holiday.

The finance minister has given away revenue by reducing taxes; so budgetary receipts are going to rise only 1.4 per cent next year. But he still expects to bring down deficit ratios. How? First, he is planning to get a lot of money from auctions of spectrum and coal blocks; he projects “other receipts” to rise from 0.3 to 0.7 trillion. And second, he has projected nominal GDP to rise 14 per cent—say, 6 per cent from inflation and 8 per cent from real growth. The growth projection is excessive; he will achieve the promised reduction in deficit ratios only if inflation is high. So the timeline of deficit reductions he has promised is not credible. He will run higher deficits than he promises, just like his UPA predecessors; he will promise to do better in the future, but will probably not.

His projected tax revenue next year is 15.8 per cent higher. This is predicated on the 14 per cent rise in nominal gdp; if it does not materialise, nor will revenue. The finance commission has increased states’ share of central revenue enormously; that will raise transfers to states from Rs 3.4 to Rs 5.2 trillion. The finance minister expects to raise “miscellaneous capital receipts” from Rs 0.3 to Rs 0.6 trillion, I suspect by selling shares in public enterprises. The sale has been postponed many times, and may be again if the stock market crashes. In which case the government will borrow more. From whom? The banks, of course; there will be that much less money for productive sectors. This is exactly how the UPA finances were managed.

In the coming year, the finance minister expects to raise the Centre’s plan expenditure from Rs 1.9 to Rs 2.6 trillion, and cut down his support to state plans from Rs 2.8 to Rs 2 trillion. That is an excellent idea; I think there is much public investment that is better done by the Centre. But the prime minister has already shut down the planning commission and transferred planning to states; his replacement, Niti Aayog, is also dominated by the states. Will the states let the Centre control all this plan expenditure? Will they not ask for it too to be transferred to them? The Centre can point out that it will give the states a much larger share of revenue as ordered by the finance commission; but it is to be seen whether the states will be satisfied.

The government has come under the control of a PM who spent years as a chief minister of a state and developed terrible paranoia about the Centre. He would like to transfer resources and powers to states. He has been helped by the enormous transfer of resources on the command of the finance commission. The two together are about to force a precipitate decentralisation of the Indian state. Is this good? Did the Centre not have a better idea of national interest and priorities than individual states? Do we not need a strong central government when we have such neighbours as China and Pakistan? India has a strong prime minister, but his philosophy favours a weak state; and the opposition to his views is even weaker. This conjuncture is the last thing we need at this stage in our history.

Digging In The Wrong Grave