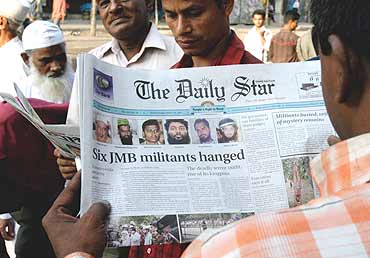 outlookindia.com
-0001-11-30T00:00:00+0553
Bangladesh's military-backed interim government may have moved swiftly to execute six top Islamic militants, including Jama'atul Mujahideen Bangladesh (JMB) supremo Abdur Rahman and his deputy Bangla Bhai, yet the country reels under threats of retaliatory terrorist attacks from an estimated 20,000 JMB followers. Security has been tightened countrywide even as authorities continue to arrest Islamic militants either belonging to the JMB or other groups, most of them with links to the Afghan war.

The government has vowed to bring to justice those who backed such elements. Already a number of Bangladesh Nationalist Party (BNP) leaders, including ministers and lawmakers, face charges of patronising militants. "We have tentatively identified the JMB's patrons," said Nur Mohamad, the Bangladesh police chief, adding, "We have the names of the patrons from those arrested." Law advisor Moinul Hussein warned, "The patrons will face the same punishment (execution) if found guilty." (In the interim government, 'advisors' function as ministers under the chief advisor.)

The reponse to the execution was largely positive, and most experts agree it was an important, even necessary, step to send a signal to the militants and the world at large that Muslim-majority Bangladesh will not tolerate extremism in the name of religion. For instance, advocate Z.I. Khan Panna, chairman of the human rights and legal aid committee of the Bangladesh Bar Council, said they believe "this government will take proper action against the patrons of the fundamentalists who are responsible for killing innocent people in an attempt to destroy the secular and democratic image of our country."

Though the six militants were hanged for killing two judges in Jhalakathi in 2005, their parent organisation JMB and its offshoot Jagrata Muslim Janata, Bangladesh (JMJB) have killed and maimed many people during their decade-long underground operations. But they really burst into limelight through a near-simultaneous 500 bomb blasts in 63 of Bangladesh's 64 districts on August 17, 2005. At the bombing sites JMB cadres left behind leaflets declaring a jehad for turning Bangladesh into a country ruled by the Shariah. Earlier, vigilante JMJB gangs had terrorised Rajshahi, Naogaon and Natore districts on the pretext of cleansing the northern areas of outlawed leftwing Sarbahara and Purbo Banglar Communist Party.

The manner in which the six militants were executed testifies to the government's serious intent to crack down on terrorists. The sentences were carried out in secrecy and the media was kept in the dark as to the date and time of the executions. The prison authorities officially announced on March 22 that they had received a copy of the president's rejection of mercy petitions that day and according to the jail code, they'd execute the militants between April 13 and 19. "Actually, we had received the president's decision on the mercy pleas much before the media was informed. And the executions have taken place immediately after 21 days since the receipt," a prison source said. As per the code, death sentences have to be carried out not before 21 days and within 28 days since receiving the president's rejection. Prison sources say the six militants were executed on March 29 at four different jails amid tight security.

The authorities had deliberately misled the media so that none could know the exact date and time of executions due to security reasons, prison sources said. Zakir Hossain, brother of Khaled Saifullah, said Khaled's wife and another brother met him at Rangpur district jail on March 25 and even talked to the authorities about visiting him again on April 1. "We did not know that we wouldn't see him again," he added.

Zakir said his family learnt about the execution only after law enforcers brought the body to their house at Kawkhali in Pirojpur. Members of the local police and the rapid action battalion brought the bodies of JMB leaders to their villages early on March 30. Prison officials said that either Rahman or Bangla Bhai had commented, "We are prepared. There's nothing to inform us." But Mamun burst into tears when told about his imminent hanging.

Experts, however, feel the headline-grabbing execution doesn't mark the end of Islamic militancy, because the reasons for a person to become an "Islamic warrior" still remain. As Imtiaz Ahmed, a professor at Dhaka University's international relations department, told Outlook, "Six militants have been executed according to the laws of the country. But we have to remember that militants still believe what they have done or are still doing is correct. Their belief is deeply ingrained."

Prof Ahmed feels it is imperative to dismantle the militant network inside and outside the country—and strike at their belief system—before the nation can truly hope to rid itself of Islamic militancy. Also, militant Islam is not peculiar to Bangladesh alone, nor is it necessary for terrorists to always have patrons. Prof Ahmed explains, "They can create a devastating impact through a small core group. Thus, the executions don't mark the end of militancy; next time militants can attack with greater sophistication."

Agrees legal expert and human rights activist Shahdeen Malik: "The executions are the end of a phase, but not the end of religious terrorism and fanaticism." For one, militants' access to financial and other resources, and their ability to utilise those, still remain largely unknown and unaccounted for. "Uncovering these is essential to root out terrorism. I expect the government to find out these sources and the political support system of these terrorists to really free us from terrorism," Malik says.

Although names of ministers and lawmakers have surfaced since JMB elements started operating in northern districts in 2004, investigators never made concerted efforts to detect and expose them. Only recently, after the caretaker government vowed to punish patrons, some victims filed charges against former telecom minister Aminul Haque, former state minister for housing Alamgir Kabir, former deputy minister for land Ruhul Quddus Talukder Dulu, former lawmaker Nadim Mostafa, and Rajshahi city corporation mayor and former BNP lawmaker Mizanur Rahman Minu. Indeed, to root out terrorism it's necessary to punish the hidden hand, however powerful, behind it.

Art For Their Sake