'Desi' ads open their account in the American cityscape 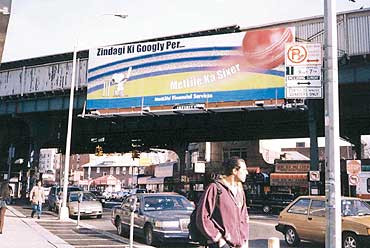 outlookindia.com
-0001-11-30T00:00:00+0553
For an Indian, roaming through the New York City neighbourhood of Jackson Heights can be quite nostalgic. Kulfi-vendors and kabab stalls abound, as do gold shops. There are even occasional streaks of paan on the sidewalk. The ersatz Indian experience could have been complete had it not been for the advertising signs promoting telephone calling-cards—urging the reader to chat even longer with the loved ones you left behind in India.

Indeed, it was only a matter of time before Jackson Heights' marketing potential was exploited for outdoor advertising. For instance, hanging from a subway platform is a hoarding for MetLife Financial Services—a cricket bat-swinging Snoopy and the line: "Zindagi ki Googly Per MetLife Ka Sixer."

The MetLife hoarding is one of the latest examples of a slowly growing public phenomenon: the attempt of mainstream advertisers tap the buying power of the niche south Asian audience, testifying to the increasing importance of the Indian community in the US market. Conservative estimates put the current expenditure on desi (or Indian) ads at around $15-20 million.

Outdoor advertising will only boost this expenditure further, limited as other media avenues have been till now. Says Shailendra Ghorpade, MetLife's senior vice-president (marketing and e-business): "Five to eight years ago, there were very few opportunities (for advertisers), aside from some two-hour TV programmes on weekends."

The shift to outdoor advertising has been brought about by the recent immigration waves to the US, a spike in numbers that made south Asians worthy of serious marketing attention. "These communities tend to be more concentrated than dispersed, which is a fabulous thing for advertisers," exclaims Ghorpade, whose company has put up strategically-placed billboards in three cities—New York, Chicago and Edison, New Jersey.

The Snoopy ad may have employed Hinglish, but most advertisers realise that the use of regional languages is a careful balancing-act. "Typically, we advertise in English to the Indian diaspora," says Saul Gitlin of Kang & Lee Advertising. The diversity of the Indian subcontinent means that making an ad entirely in Gujarati, Bengali or Punjabi can backfire on the advertiser. "It's harder," admits Gitlin, adding: "Our Indian teams have to be very careful not to alienate."

But one reason why diaspora advertising hasn't grown till now is because of what is generally perceived to be a virtue of the south Asians—their command over English. Says Anil Srivatsa, host of the syndicated radio programme Anil-ki-Awaaz and ceo of Reminiscent Television, which markets to the diaspora: "Mainstream advertisers, aware of the Indian competency and proficiency with English, didn't feel it necessary to patronise the limited desi media. Their philosophy was that they could reach the target audience with the mainstream media." (The trend continues: a recent commercial for Dove soap features an Indian woman and her mother.)

The advertiser's belief that they can reach the Indian community through mainstream publicity is precisely the reason why the spark in desi advertising hasn't yet been lit. Bemoans Peter DeSouza of Admerasia, the New York-based agency that designed the Snoopy hoarding: "We're an invisible minority. In spite of being enormously successful and educated, we haven't marketed ourselves as a singular target audience." Srivatsa feels this is because of the very limited knowledge mainstream advertisers have of the Indian media industry here. "In fact, their degree of information ranges from inadequate to non-existent," he says. "So they turn to self-proclaimed media planners from fledgling agencies who parade themselves to be marketing consultants. In reality, they are no more than media buyers who just buy the media with no knowledge of the consequences of the media they buy."

But all this could well now be history. The Snoopy hoarding and other similar ads show it won't be long before the south Asian market follows in the footsteps of the Hispanic market. Once marketers started paying attention to the spending power of Hispanics, years ago, Hispanic media grew exponentially, driven by big-budget advertising. "Advertisers will now get a whiff of this trend and will come around to spending the ad dollars soon," predicts Srivatsa. Let the spending begin.