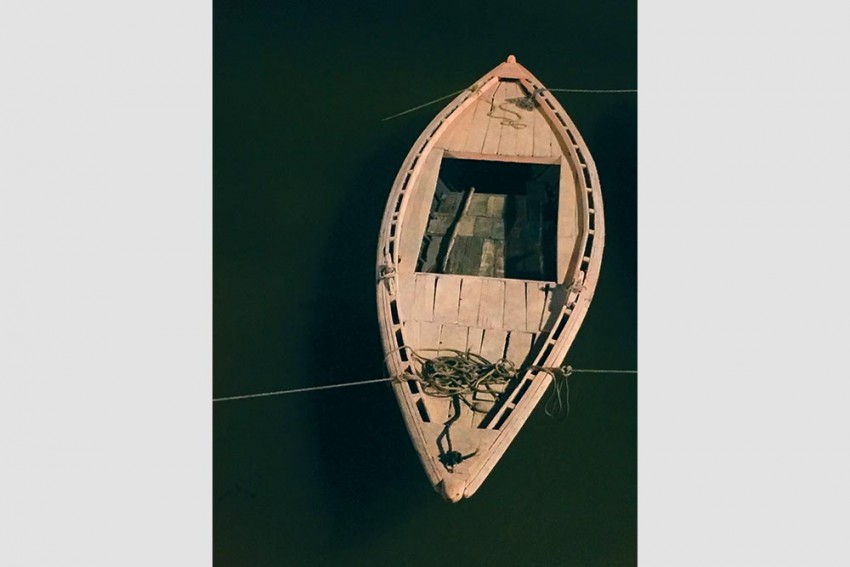 The itinerary is preset; all the moves are synchronised, segueing from one bandish to another. The invite, the aisle seat, live Kabir bhajan at the exit gate, the taxi tailgating through a melting mass of men and machines on roads that teleport locomotion into an intergalactic war. And I, narcoleptic from the occupational hazard called three straight graveyard shifts, find my karmic wounds flare up again. Airplane ears—the throbbing pain that converts Kabir’s Jhini jhini bini chadariya in Kumar Gandharva’s vibrato into a gypsy’s jangling tambourine medley. Help. I pray. Aha! The Valsalva man­oeuvre. I blow out lungful of air, mouth closed, nose pinched shut and cheeks inflated. Puffer fish pakodas, anyone? A caveat lands on the WhatsApp group: “Welcome to organised chaos.” It’s Imtiaz Alam, our warm-hearted cicerone. The cab weaves through the rush and I switch to the Weaver, the most philosophical to have ever spindled a loom: “Jara halke gadi haako mere Ram gadi wale…”

Kashi. Banaras. Varanasi. Ghats, galis, gaalis, gyan, pealing temple bells, mue­zzin’s call to prayer, karma, dharma, a lifetime of riddhis, a home for the dying, mukti, moksha. A ghost note in a thumri. Wait. Bedlam is a bedfellow here, like silence serenading sound. Hear it inside cul de sacs weaving gossamer dreams into katan silk. Or, those endless hours of riy­aaz wafting through windows of homes, where pandits and ustads pass their gharana heirloom to a generation torn between teen taal and khartal, kathak and TikTok. What slavish devotion draws people to its bevelled ghats, where life bathes in the lapping Ganga and pupates on a flaming pyre, spindrifting flavours and philosophies in forms quintessentially Banarasi, yet universal—the Maghai paan’s softness, the hing-infused kachori-subji, Bismillah Khan’s shehnai, Tulsidas’s baanis, Kabir’s dohas? The inhomogeneities coalesce to reveal, like a Schlieren photo, the depths of this ancient city at peace with itself, an astral calmness that cures the chaos.

I am here for Kabir—the fourth Mahindra Kabira Festival, an event set on Shivala and Guleria ghats, with ample display of the Mahindra Group’s mus­ical traction (sturdy as its tractors) and Teamwork Arts working together towards a common vision. It opens with Banaras gharana’s Rahul and Rohit Mishra blending khayal, thumri, tappa, dadra, chaiti, kajri, hori, and bhajan to capture the passion of their hometown’s Backstreet Boy from six centuries ago. And the music flows: sitarist Neeraj Mishra, vocalist Ujwal Nagar, flautist Pandit Ajay Shankar Prasanna, Ustad Kamal Sabri on the sarangi, Kabir-panthi Shabnam Virmani, Omprakash Nayak’s Vaani songs of Thar mystics, and Kutchi folk singer Mooralala Marwada. And reggae—an ode to Marley and Kabir. Grammy-nominated Pato Banton (renamed after a Jamaican owl) sets the tempo before Neeraj Arya’s Kabir Café completes the neo-folk, with a groovy rhythm of electric guitar, violin, mandolin and drumrolls, vigorous Malwa-style vocals, hip-shakes and high-claps. Their music is novel in form, unorthodox in approach; stylistically objectionable but logically coherent. A perfect antipasto for the all-you-can-eat buffet—spread out hot and inviting under a shamiana!

I realise, without chagrin, it’s impossible to decipher Kabir and his birthplace in three days, no matter how much song or dance I make around them. Bhakti, Nirgun, the Advaita tradition of god existing in every person, anti-god, atheist, agnostic…these dance off my head like bullets from Superman’s chest. All I can gather is that Kabir wasn’t a member of the god-is-great, you-are-shit global cooperative. Not a liberal urban Naxal, neither an alt-right bhakt. He stands in the binary between rationality and spirituality, a Weaver who berated the brahmin and mocked the mullah in equal measure, rhyme and metre. Hindu kahu to hu nahi/Mai Musalman bhi nahi/Are je dono ke beech mein/Mai khelu dono mein.

Banaras strains under the weight of its history and the chokehold of mod­ernity. Girls in skinny-fit; a procession shoulders a corpse to Manikarnika ghat; Prada shoes stride alongside wood slip-ons and bare feet; a Japanese restaurant cheek by jowl eateries selling satvik aahar; tom yum soup versus malaiyo­—daulat ki chaat, that frothy winter ecstasy. A spent bottle of Famous Grouse bobs in the sedate waters next to an areca-leaf katori cradling a bright diya and marigolds. The faithful sip masala-lime tea, with a hint of Hajmola, before the choreographed aarti at Assi. I am sold on the pizzas and apple tarts at Pizzeria. At dusk, psychedelic lights illuminate the riverfront. A sadhu sits astride a pier. A man prostrates before his manhood, seeks blessings for…Erectile dysfunction? His Naked Holiness beckons: “Moksh milega.” I resist. You keep your faith. I keep my beer. Aisi bani boliye ki jam ke jagra hoye/Par ussey na boliye jo aapsey tagra hoye…I sing to myself, everyone, and no one.