Balm Under The Palm Tree 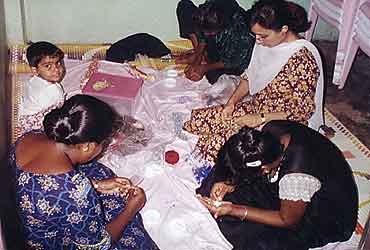 outlookindia.com
-0001-11-30T00:00:00+0553
Not far from the sun-kissed hotspots of the harbour town of Vasco da Gama lies the darker face of Goa’s tourist boom. Lurking behind the smoke-filled gambling dens and taverns is Baina Beach —a bustling redlight district which has the dubious distinction of having made it to the international sex map.

At 9 am as unkempt lanes reel from yet another night, in the nearby Jannat Galli it’s time for 37-year-old Arun Pandey to begin a hectic day—of court battles against human trafficking and commercial exploitation of women.

As coordinator of Anyay Rahit Zindagi (ARZ, meaning life sans injustice), an NGO he co-founded with friend Zarine Chinvala, his itinerary also includes looking into the health of sex workers; counselling, rescuing, repatriating and helping them create opportunities for themselves.

Way back in 1997, Pandey and Chinvala—both criminology and correctional administration majors from the Tata Institute of Social Sciences, Mumbai, devised a model of rehabilitative intervention to rein in trafficking and prostitution through ARZ.

It was an uphill task. They were at the receiving end of social cynicism and the combined muscle of perpetrators, politicians and the police. Besides resistance from a corruption-ridden and lackadaisical administration, they also braved monetary hitches. Says Pandey, who has done a national study on prostitution, "These individuals have the potential to rise above their disadvantages—all they need is an understanding society."

ARZ provides education and pre-vocational training to children from the prostitution market as well as counselling services to men to keep them from abetting prostitution. Not only has it mobilised the community to take up cudgels against the menace, it has also caused deterrence for perpetrators like brothel-keepers, bar-owners, pimps and ‘customers’—assisting the police and the judiciary in pressing charges against them. It also protects vulnerable girls from being sucked into the trade.

"It’s been difficult to break through preconceived notions," admits Chinvala. Yet, ARZ has managed to catalyse a legislation banning religious dedication of girls. They have also contributed through the Collector’s Panel formed under the Immoral Traffic Prevention Act, resuscitating defunct state protective homes. Through networks with community groups and like-minded organisations, it has also cemented inter-state rehabilitation work.

ARZ’s success lies in the lives of those like Shweta from Karnataka, 15 and a victim of religious dedication. It has also sent influential brothel-keepers behind bars. Another minor, Naina, pushed into prostitution by a seasoned trafficker, Maharani, in return for the debt incurred by the former’s family, has since returned to her village. Yet another devdasi, Rekha, is today working with an NGO.

ARZ has been receiving support and encouragement from various quarters. But Pandey is convinced that they have a huge task ahead.