Balm Before The Budget

From the coalition web, the finance minister tries to allay fears of the investing community 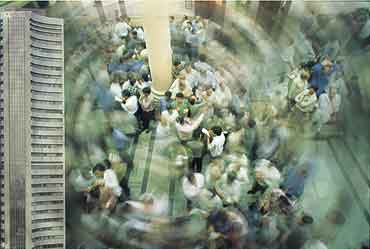 outlookindia.com
-0001-11-30T00:00:00+0553
When finance minister P. Chidambaram undertook his whirlwind visit to Mumbai last week, he had a single objective in mind—to help Delhi, the political capital win over the heart of Mumbai, the country's commercial capital. For, ever since the election results were announced three weeks ago, Mumbai has shown little faith in the new political regime at the Centre. The city has been unnerved by economic uncertainties, wracked by the socialistic overdrive of the Left parties that support the Congress-led coalition, and sobered down by the vagueness of the Common Minimum Programme (CMP).

The markets crashed initially, then moved up and down like a yo-yo. Foreign investors, especially the institutional ones, seemed ready to pack their bags. Even the local businessmen went into a huddle, unsure of what policies the new government is likely to pursue. Most economists openly criticised the CMP and other announcements from supporting parties, as well as the initial statements made by the various ministers. Finally, even global rating agencies thought that things could only get worse from now on (See Interview). 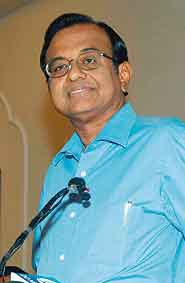 So, when Chidambaram decided to hold an afternoon press conference last Thursday, it held the promise of assuaging the sentiments of the business community and the stockmarkets. An immediate reaction came from the BSE Sensex, the sensitive index that has acted as the barometer to gauge the confidence that Mumbai has in Delhi on a daily basis. Within minutes after the FM finished his speech, the Sensex plummeted and fell 105 points. It seemed the bourses were not going to be content with assurances like reforms would go on and that the government would pursue fiscal prudence.

Explains Ambareesh Baliga, vice president, Karvy Stock Broking, "While the finance minister was on a confidence-boosting exercise, the markets were expected to remain range-bound. But in the long term, it will want to see his thoughts converted to action." It's the budget, to be presented in the first week of July, that will ultimately signal the market's long-term direction and perhaps even its short-term swings. Adds Motilal Oswal, chairman, Motilal Oswal Securities, "The stockmarkets had huge expectations from the FM's visit, while he was here only to gauge its mood."

After all, the major worry among the business and investor communities is about the CMP, which has mentioned a string of welfare, pro-poor schemes with little idea of where the money will come from. Admits Baliga: "The FIIs are concerned about how the government will plug the fiscal deficit with a populist budget. If indications are to the contrary, long-term FIIs too could pull out their money." Also, the government has dismantled the disinvestment ministry, a key resource mobiliser last fiscal. However, it's planning to leverage public funds and raise private funds, similar to the financing model of the National Highway Authority of India. If the same is extended to other sectors like ports, rural infrastructure and the hospitality sector, then the strain on the government's finances will be that much lesser.

Not to forget the "Left" factor. Each time the Left parties make a socialist demand, sentiments get subdued. For example, last Thursday, the CPI(M)'s Sitaram Yechury said his party opposed the privatisation of airports and any psu sale should require the prior consent of its trade unions. That depressed the markets immediately—such noises are never taken well by the global business community. Experts admit that it's still unclear what kind of influence the Left parties will have on policymaking and the forthcoming budget.

Another threat is the feeling that US interest rates will go up. Even a small rate hike in the US would make its domestic economy more attractive and global investors will tend to pull out money from the emerging markets and re-deploy it in more lucrative options closer to their home.Over the last month, there has been some major sell-offs in the Asian markets, which have fallen by more than 20 per cent in recent times. Global markets too were extremely volatile in recent times, which could increase the fear of the FIIs.

Then there are other pressing fears whose impact will only be known in the months to come. For instance, global oil prices are at an all-time high at around $40 a barrel. Although OPEC (Organisation of the Petroleum Exporting Countries) decided to increase its oil output by an extra two million barrels a day (an eight per cent increase), it's not clear how this will affect prices. Indian policymakers face two options: one, to hike domestic prices that can impact inflation rates and, two, absorb the price hike that will lead to higher subsidies to public sector oil firms.

During his Mumbai visit, Chidambaram wanted to allay all these concerns. In a meeting with several FIIs, he reminded them that the Left parties were a part of the United Front government too. And during its tenure, he as the FM had initiated tax reforms, liberalised external commercial borrowings, constituted the insurance regulatory authority and encouraged FII investments. Therefore, even today, reforms would continue. Arup Raha, head of research, J.P. Morgan, thinks, "the FM's visit has sent a very positive signal" that this government is troubled by what investors feel about the country's economic future.

Fortunately for the FM, there are other positives too. In the first four trading days last week, there was a net inflow of Rs 528 crore by the FIIs. This after they pulled out a massive Rs 3,300 crore between April 30 and May 20. More than that, there's over Rs 90,000 crore of FII money invested in Indian stocks and only a fourth of it can be termed short-term. But the latter, termed hot money, has already exited. Agrees Nandan Chakraborty, head of research, Enam Securities: "All the weak hands and short-term players have exited from this market." And today, only the long-term FIIs are still interested in the Indian markets.

The long-term players feel there's just too much unnecessary hype about the possibility of the rising fiscal deficit. Says Chakraborty, "There's absolutely zero correlation between the high fiscal deficit and the Sensex movements." In addition, current stock prices suggest an under-valuation. At Sensex levels of 4,500, the valuations look attractive. That's because the market has traded at historic PEs (Price Earning) of 14.7, which is close to existing low levels. But the one-year forward PEs are nearly 11-12, which suggest the Sensex is undervalued.

Yet, there has been little fresh buying. Apart from the FIIs, there are no major players who can pump in enough money to push this market to new highs. There's not much of excess cash with Indian institutions and retail investors have all but vanished after the recent crash.

So, if the FM can woo the FIIs, the markets can stabilise a bit. Looking at it from that perspective, it's heartening to note the commitment of the finance minister towards capital market participants. He's being forced by the limitations of the coalition government, but since the reforms process is not going to be reversed chances are that the markets could be in for a few surprises. Only if Chidambaram can pull a few rabbits out of his budget hat!