A documentary filmmaker's diary on a visit to Indonesian island Bali. Say scenic beaches, coral reefs, rock formations, ancient temples, paddy fields punctuated with coconut palms and fruit trees, undulating hills, winding roads with local boutiques and tiny museums of stone carvings! That’s the top layer of what to expect in the breathtakingly beautiful isl­and of Bali in Indonesia. It’s no surprise it attracts over five million tourists annually. It’s also one of the seven countries where Indians can get a free visa on arrival.

Laze around watching surfers ride huge, unpredictable waves. Or move to the calmer side of sand, which has shallow reefs and coral gardens that you can explore on sea walks and other sea-based adventures. This is every bit postcard country. Underwater photography can be rewarding. Bali is home to over 950 species of reef fish like eels, triggerfish and others. And remember, walking on the sea floor is a memorable experience; or, diving to explore a wrecked US Army transport ship that lies at the bottom with sea life flourishing within and around it.

What struck me most was the nonchalant yet deep seated spirituality. You see what real Hinduism is about: no aggression, no belligerence, no hatred for other religions and no one telling you that their religion is better than yours. In 1959, Hinduism was declared one of the official religions of Indonesia. It has thrived in the country that has the maximum number of Muslims in the world.

On every street you will find offerings of Frangipani flowers and fruits made to different deities. Huge sculptures depicting Hindu myths and legends are all over the cityscape: 20,000 temples! Only locals can visit most, but if you do get a chance, dress modestly. Island traditions drape the Hindu myths in their own colours. Traditional performances like the Barong use huge colourful animated wooden masks to narrate stories, borrowing some from the Hindu epics. 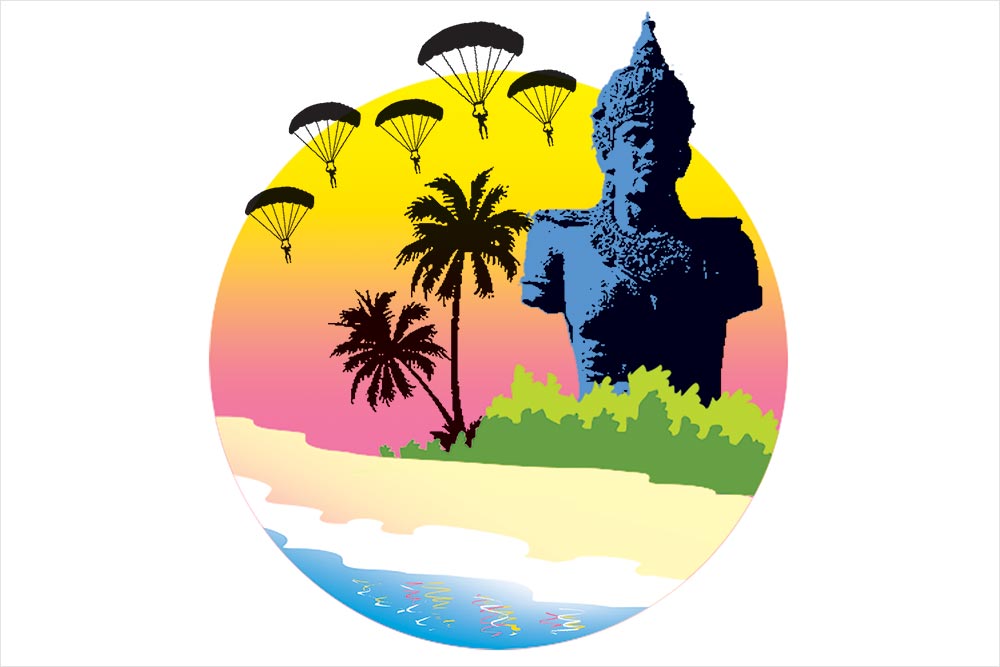 You can go to Bali on a shoestring budget or can splurge on a resort that charges as much as any high-end hotel in Europe. Take your pick. As one Indian rupee is worth over 200 Indonesian rupiah, it takes time to figure out your finances when you shop or eat out as everything is in thousands or lakhs. A good meal can be got for around two lakh rupiah!

For a good many thousand, you can kick-start your ideal day with a lazy, long-drawn breakfast at the beach or your hotel where there are great spreads. The locals stuff themselves silly with a wide variety of rice, non-vegetarian dishes, salads, breads, cakes and many other sundry items for breakfast, but you can take your pick.  If you miss it, you can always pick up fresh fruits from roadside vendors. Or fresh tropical juices.

If the sun is a bit warm, you can opt for a Balinese massage. There are hundreds of good parlours that will amaze you with the variety they offers. Some massage and spas use locally made products that use herbs, fruits, flowers, roots, spices, honey and essential soils. Some offer chocolate body scrubs, gold dust facials and even volcanic lava body scrubs. There is one done with bamboo sticks! The alluring massage ads also promise vodka-tomato, clay wrap, pineapple and wasabi treatments.

The biggest threat to Bali today is pollution caused by plastic waste. An estimated three million plastic bottles are discarded in Bali every month threatening to ruin the pretty picture. Some of its pristine beaches are strewn with plastic thrown back by an angry ocean.

In November 2018, a 30-foot dead sperm whale washed ashore in eastern Indonesia off Kapota Island in the Wakatobi National Park. It was found to have six kilos of plastic waste and trash in its stomach. It included 115 drinking cups, plastic bottles, two flip-flops and one thousand pieces of string.

Sperm whales are fascinating creatures who can dive deep into the sea and can go as much as 3,280 feet in search of food. They can hold their breath for nearly 90 minutes on deep dives. Environmentalists fear that more such sea creatures would die by ingesting such vast amounts of plastic.

Earlier, a British diver stunned viewers with a video shot underwater off the Bali coast with plastic bags, food wrappers and other trash floating all around him and the fish. Bali cannot ignore the problem as 80 per cent of its economy depends on tourism that has made it one of the wealthiest regions in Indonesia. Maybe, that is why there are attempts to clean up the beaches and also educate people on the need to curb plastic usage and ensure proper disposal. It is worthwhile saving Bali from man-made pollution.

(The author is a documentary filmmaker and a journalist)