In the BJP’s mood for market economics, how will this Modi pal’s swadeshi fare? 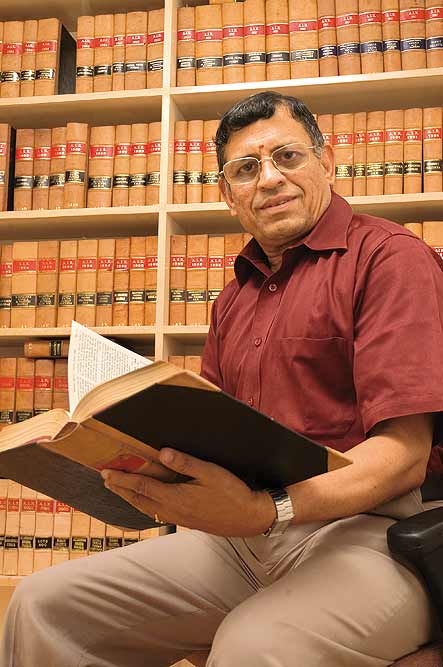 “The BJP, which will follow a market-led approach to the economy, will have no place for the Gurumurthy school.”

“He’s a CA and knows how to fix accounts, spot subterfuge, see where money’s hidden. But he is not an economist.”

For many long decades now, Swaminathan Gurumurthy has openly been a friend, philosopher and economic guide of the Bharatiya Janata Party (BJP). But he has always cast himself as a behind-the-scenes operator, making a virtue of shunning the limelight. On his Twitter handle (@sgurumurthy), he has a photograph of Swami Chandrasekhara Saras­wati of Kanchi, and says “Mahaswami, in whom I saw God, told me to avoid electoral politics”. Yet, as the BJP’s Narendra Modi looms large over the pre-electoral landscape, many believe the Chennai-based Gurumur­thy will play an important role in crafting India’s economic thinking. The charte­red accountant and political commentator has been close to Modi for decades. Though not officially with the BJP, Guru­murthy, a hardcore RSS member since his college days, has been increasingly playing a direct role in its affairs. In 2012, he famously gave then BJP president Nitin Gadkari a clean chit in the controversy over investments in the latter’s Purti Group. This hel­ped Gadkari complete his term in the post.

Given this long association, when Gad­kari recently announced some tax ref­orm proposals, involving the replacement of income tax with a banking trans­ac­tions tax, many believed it was the Guru­murthy school of economics at play.(Widely panned by critics, it remains a “proposal”.) For Gurumurthy and new BJP entrant Subramanian Swamy have long supported this view, and have, along with former RSS ideologue K.N. Gov­indacharya, always donned the mantle of warriors looking for ways to curb black money and tackle corruption.

What’s working in his favour is his proximity to Modi, whose need for idea inputs have only gone up. Says M.R. Venkatesh, a Chennai-based CA and political analyst who has worked closely with Guru­murthy, “He is at the centrestage of modern economic thinking. Though he is not from the BJP, he is too precious a talent for Modi to ignore.”

Gurumurthy is considered highly networked: some think he is the BJP’s bridge to Tamil Nadu chief minister Jayalalitha and her AIADMK. Not everyone agrees with this perception, though. In fact, he is close to Jayalalitha’s advisor Cho Ramaswamy, a well-known political com­­m­entator. “Gurumurthy’s proximity to the AIADMK is an exaggeration. He has no particular line with the chief minister. But he is close to Modi and has been in touch with him for a number of years. He saw Modi entering the national scene much before others did,” says N. Ram, former editor-in-chief of The Hindu.

This BJP backroom boy shuns the limelight but keeps his network alive. That’s what makes him useful to the party.

On one point there’s no ambiguity: on issues of national interest, Gurumurthy holds strong, radical views. He is also a successful mediator at the highest levels of industry and politics. His mediation in the Bajaj family dispute has become part of corporate folklore, as has been his late-1980s crusade against the Ambanis in which, backed by media baron Ramnath Goenka, he sought to expose alleged irregularities in the working of Reliance Industries through a series of articles in the Indian Express.

Gurumurthy did not respond to Out­look’s requests to take questions for this story. A few weeks ago, he had sent this text to a request by Outlook for an inte­r­view on the BJP’s economic philosophy: “Would it not be better to ask someone in BJP...than me...in distant Chennai, a grown-up village? Can’t talk for BJP.”

Interestingly, many of Gurumurthy’s associates and friends believe that his radical economic thoughts and beliefs might not necessarily be in sync with what Modi is thinking. K.N. Govind­acharya, a close friend of Gurumurthy, feels that his development model is diametrically opposite to the market-led economy that is being pursued by the BJP. “The BJP, which will follow a market-led approach for the economy, will have no place for the Gurumurthy school of economic thought that supports a swadeshi model,” he says.

The swadeshi concept of growth is essentially a warmed-over Gandhian line professed by the RSS and its wing, the Swadeshi Jagaran Manch, of which Gur­u­murthy was co-convenor. “He has a clear line on economic issues, which may be different from the BJP, especially in the context of reforms,” says N. Ram.

Gurumurthy has certainly been active in matters of economic policy—many of them at the BJP’s behest. In 2011, as the head of a task force set up by the BJP, he exposed the failure of the UPA government to check black money parked by politicians and industrialists in Swiss banks and pushed for legislation that would force holders of black money to bring it back to India. In 2012, his views on monetising India’s domestic gold assets made headlines: he said India had over 5,000 tonnes of non-ornament gold which could be sold, bringing returns for the government and the economy.

As can be expected, his take-no-prisoners approach has won him many critics. Says Mohan Guruswamy, himself a part of the BJP’s economic team during the NDA regime and founder-chairman of Centre for Policy Alternatives, “He is a CA and is familiar with how to fix accounts and an expert on corporate subterfuge. But that does not make him a policy specialist or economist. Guru­murthy wouldn’t know anything about Keynesian economics or supply-side economics. But he can read a balancesheet and tell you where the money is hidden. So he thinks he has all the answers.”

Indeed, Gurumurthy’s strong swad­eshi views haven’t been accepted readily even in the BJP. He is viewed by an inf­luential section as “full of quaint and far­-fetched ideas”. In Gurumurthy’s worldview, there is untold wealth in India and trillions of dollars worth of gold. He feels the country has all the capital it needs and needs no foreign capital, overseas expertise and technology: everything is here, within the country.

But there are two factors in his favour: one, his strong links with the corporate sector, the single most important consideration for Modi. Second, there’s no denying that the firebrand Tam-Brahm has been the most important backroom ideologue and go-to person for many BJP leaders for many years. Given all this, it’s safe to assume that Gurumurthy will continue to perform an important behind-the-scenes role in the new BJP dispensation, if it comes to power. If so, his friends feel it will be the moment when Gurumurthy’s school of economics will find expression.