I’ve so far maintained my silence, but I now feel I must record what actually transpired for posterity... 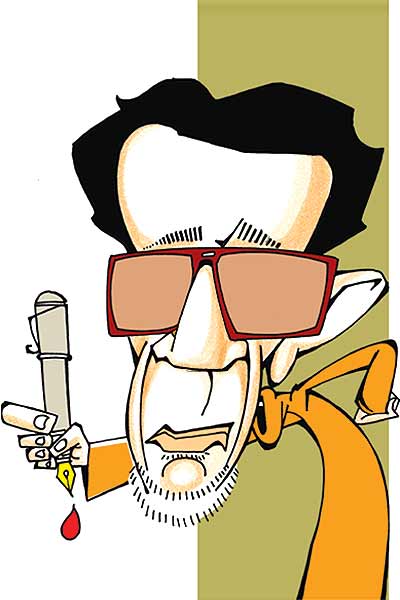 I’ve so far maintained my silence, but I now feel I must record what actually transpired for posterity. Well, many of you may be wondering what I have against Shahrukh Khan and his latest film.To be honest, personally, I quite like the chap. But I certainly did not like the way I was tricked into giving my approval for My Name Is Khan. So, how was I  fooled? Well, to cut a long story short, it was sometime last year that Karan Johar called on me at Matoshree and sought my blessings for his new project. The gentleman that I am, I offered him chai and gave him a pat on the back. “I’m sure your film will do well since you have cast Kajol opposite Shahrukh,” I said, “but I find the title ‘My Name Is Cannes’ rather curious.” Karan giggled in response, as if he was hosting that horrendous show on TV where he drinks coffee (from an empty cup) with his pals from the industry. Anyway, I did some quick thinking and figured that if the movie was about Cannes then it must be about some desi hero who takes the world by storm with his song-and-dance numbers. “Are you hoping to win some award-shaward with this picture?” I asked out of politeness. Karan giggled again. “Thackerayji, with your blessings I will surely win several awards,” he said with exaggerated enthusiasm. While seeing him to the door I assured him that my sainiks will not burn posters or vandalise theatres where the film will be exhibited. “Of course, they may raid the pop corn and pizza stalls,” I said as an afterthought. “After all, the boys have to eat something more than vada pav.”

Now, you will agree that I had offered my support in good faith. So imagine my surprise when I learnt that Karan’s new film was My Name is Khan. I immediately summoned my son Uddhav and asked him to check whether this was the original title I had approved. “Vadeel, it was ‘My Name Is Cannes’,” he said, “but that’s all right. ‘Cannes’ is how Malayalis pronounce Khan.” Oof! I tell you, this Uddhav is not exactly worldly-wise and can be very frustrating. Anyway, to his credit, he was quick to suggest action: “Vadeel, if the title’s been changed then we should ban the film. Also, Shahrukh has been talking about selecting Pakistani players for the IPL.” I mulled over what he was saying and finally pronounced ‘action’.

Now, no sooner did it become clear that the film was in trouble than Karan sent emissaries. He was willing to apologise and even promised that his next film would be titled ‘My Name Is Thackeray’. Well, I admit I was rather flattered by this and agreed to call off the protest. But my good friend Sharad Pawar came up with a revelation which proved I’d been tricked again: Karan’s proposed film is based on the life of William Makepeace Thackeray, the 19th century English novelist who wrote a book called Vanity Fair. Now, that’s what you call unfair....