Baking News: Believe It Or Not

The US media is slowly but surely being left out in a game it had invented and mastered. The moral: media insularity sucks. 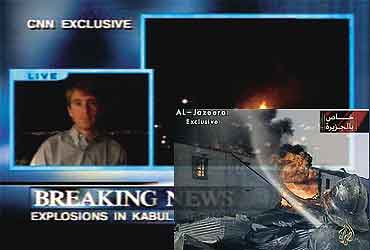 Switch on the telly and the only truth you'll find on the networks is grainy, green flickering live images of the Kabul night sky and wobbly footage of plumes of bomb smoke in the mountains. Occasionally, you might stumble upon a comatose child, a casualty of war, in a derelict hospital. All relayed, by the way, from an upstart Arab satellite channel station. The rest of the time is killed with long talk shows and dull Pentagon briefings. Talk has never been cheaper. Fine, TV is good at presenting strong, frightening images, and bad at nuance, context, and explanation. So, you pick up the newspaper for the real McCoy. They are full of grating let's-thulp-the-bastards spiel and vapid reports from outside the theatre of war on the overrated, overhyped Northern Alliance's never-ending march on Kabul. And there are more Pentagon briefings. "This will be the most censored war in history," prophesies John MacArthur, publisher of Harper's Magazine.

It already looks so. Two weeks into the millennium's first war between a bruised superpower and a zealot militia ruling over one of the world's most impoverished and ravaged countries, truth continues to elude us dangerously. On the one hand, there is the McCarthyite thuggishness of the shrill right wing which has blurred the thin line between propaganda and patriotism ("We are fighting because the bastards killed 5,000 of our people, and if we don't kill them, they are going to kill us again," howls Charles Krauthammer in the respected Washington Post), on the other, thousands of miles away in benighted Afghanistan, a bomb-and-biscuits war goes on virtually unreported, with journalists hopelessly depending on Pentagon handouts. Then, there are furtive efforts at censorship: cancelling book readings, reprimanding a television station which forbids its newscasters from wearing tricolour ribbons, nuzzling a gritty Arab channel, keeping reporters out of the war zone. Meanwhile, the search for Osama bin Laden still yields no results. "We Americans know next to nothing about any aspect of the latest war," bemoans Mark Crispin Miller, media critic and professor of media ecology at the New York University. "What's going on inside Afghanistan is a total mystery, with our reporters telling us only what the Pentagon decides that we should know, and so we keep on hearing that all's going beautifully with very few civilian casualties."