Baig Not To differ

In an election year, the stamp scam can give the Congress a good licking Updates 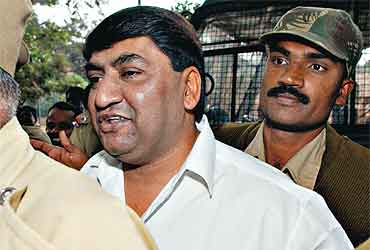 It took some tough talking by the CM to compel Baig to put in his papers soon after the arrest of younger sibling Rehan Baig in December. The strategy was to get his resignation ahead of the winter session of the assembly in January—to try and blunt the Opposition's onslaught. But Baig wouldn't give in. Instead, he chose to disown his brother, condemning him for his wayward lifestyle and declaring that he wouldn't mind being hanged if found guilty. Baig was so confident he was even then organising the annual Haj camp for pilgrims leaving to Mecca. His resignation finally landed on Krishna's table a couple of hours after news agencies ran a report that he had quit. A day later, he called newspaper offices from Saudi Arabia, saying he would return to battle all those levelling allegations against him. "I had decided to do this (resign) long ago. I tolerated everything because of the Haj trip. I decided to act after the last Haj flight left," Baig's statement from Mecca said.

The case has for now proved a godsend for the state BJP. It has made public the statements by others arrested in this case to drive home the Baig-Telgi connection. "Summon him from Mecca, freeze his bank accounts and initiate criminal cases against him," says Opposition leader Jagadish Shettiar with obvious relish. He has also charged that Baig heads Reach-Foundation, an entity allegedly funded by Telgi. The party has also vowed to "uncover" the connections of a few other ministers and senior police officers.