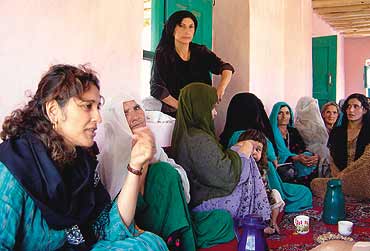 outlookindia.com
-0001-11-30T00:00:00+0553
Vrinda Dar wanted a "regular" job after a career spent mostly freelancing. "Time to do something settled," she thought. So she accepted an offer from an international NGO to work in Kabul. Not many people would consider a posting in war-torn Afghanistan, separated from one's family, a settling experience. But then Vrinda is not usual. She is among a small group of remarkable Indian women contributing in different ways to the reconstruction of Afghanistan. Their experiences are far from ordinary—as foreigners they face huge security restrictions, as women they combat social conservatism—but as Indians, they benefit from a special regard on the part of Afghans.

Working in Afghanistan is not a job for the faint-hearted. While south Afghanistan is in the throes of a conventional military battle, Kabul frequently experiences rocket attacks and suicide bombings in public places. International workers have been kidnapped in broad daylight. In May last year, anti-foreigner riots raged through the city. Several offices and guesthouses where foreigners work or live were set on fire and vandalised. The inhabitants had to escape by jumping over walls. Pushpa Pathak, caught in her office in the Kabul municipality where she works as a senior advisor, was one of them. Pushpa recalls this as one of two times when she has felt scared in Afghanistan. The other occasion was when a massive bomb explosion nearly blew away the glass windows of her guesthouse in 2004.

Pushpa, Vrinda and the other Indian women live under an enormously restrictive security regime, in high-walled houses with bunkers, guards and protective plastic on the windows. Also required are a minimum of three residents per establishment, including at least one male. These rules, plus high rents, force them and other foreigners to live in a guesthouse, or share a house with other international workers. Their social activities are severely limited because of curfews and rules that prohibit them from walking anywhere, let alone go shopping or using public transport. Travel within the city has to be under escort, usually with door-to-door drops by office vehicles and only to a limited number of restricted 'security cleared' places. Vrinda, for instance, is not allowed to visit Afghan colleagues. For security reasons, the aid agency she works for can't be named in this article. 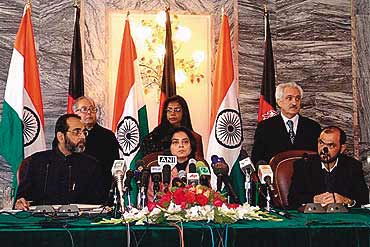 From time to time, 'lockdowns' are declared that prohibit foreigners from leaving home, or only allow essential travel. Anita Nirody, who is the country director of UNDP in its largest office globally, cancelled her first appointment with Outlook because of a lockdown following a new security alert. Any house she visits has to be security-cleared, in advance. Pushpa says she misses the freedom to go out for a play or a movie or a walk. "I sometimes feel like I am in a cage," frets Vrinda.

What makes matters worse are the restrictions on women. While expatriate women generally have more freedom than locals, South Asian women are somewhat differently placed because, as Vrinda points out, Afghan society views them differently. "There is more desire to see reaffirmation of moral standards from South Asian woman," she says.

Interestingly, Vrinda finds it far more liberating to be in the villages of Afghanistan than the cities. "Rural people are far more flexible," she says, describing the way she has been able to bond with families there. In Kabul, on the other hand, she finds the intense scrutiny of unescorted women in public spaces very irksome. Pushpa, who earlier chose not to wear the customary hijab in public, has now started doing so because she otherwise "attracts too much attention".

Yet, in her own way, Pushpa has breached many a frontier, as have other Indian women working here. Entrusted with the task of preparing policy and project proposals to raise funding and develop Kabul's land use framework, Pushpa was excited by the professional challenge Afghanistan presented. 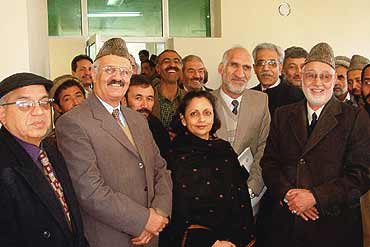 When she joined the municipality two years ago, it had no women in senior positions, and it took her a while to get respect and cooperation. But she was not surprised or daunted. "I had experienced this before in small towns in India," she recalls. In Afghanistan, there was actually an advantage—her Indian identity helped to gain acceptance, because Afghans like Indians.

Other Indian women working in Afghanistan have also experienced this. Shanthini Dawson, a special advisor in the Afghan government for five years, who works in the ministry of education, says Afghans are always too proud to accept help but "find it much easier to accept technical assistance when it comes from the region". "In fact, the downside is more with my Western colleagues who often have patronising questions," she says, adding, "I don't see myself as a foreigner anymore."

Cultural affinities between Indians and Afghanistan run deep. They stem from a shared history, cultural similarities, and a sense of common identity that comes from being a developing country with common traditions, problems and challenges. Last but not the least, Afghans and Indians are united in a negative perception of Pakistan. "Hindi not a foreigner" is a common refrain. "When you say you are from Hindustan, doors open by themselves," says Vrinda.

It is an advantage Nirody appreciates as well, even though she is now a US citizen and her work with the UN emphasises her international status. Nirody, who grew up in India, says with Indians, Afghans "are willing to take that extra step and there is a sense of familiarity". Nirody applied for work in Afghanistan as soon as the opportunity arose. "It was too exciting to resist," she says.

Though all the Indian women Outlook spoke to in Kabul were well aware of the professional and personal challenges, it was a tough decision, with families having to be left behind. Afghanistan is a non-family station for the UN. Pushpa had to counter resistance from her family in UP. Vrinda's Italian husband looks after their children while she's in Afghanistan. But they all feel it has been worth it, mostly for the chance to see their work take shape and change things. "It was the opportunity of a lifetime to come here," says Vrinda. For her, and the others, there are no regrets.