And the books they loathed? Unsurprisingly, not everyone was willing to risk their necks. But here is a short list of those who dared and bared: 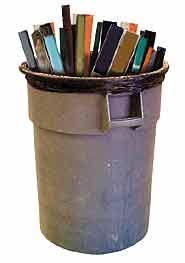 William Dalrymple: Bernard Lewis's From Babel to Dragomans: Interpreting the Middle East. The old Muslim-hater has finally lost his marbles good and proper.

Anita Nair: Kingdom of the Golden Dragon by Isabel Allende (HarperCollins). Why would a marvellous writer like her write such utter tripe!

Siddhartha Deb: Naipaul's Magic Seeds. It offered scant evidence of his formidable skills as a novelist, and the reactionary ideas on display were quite stale.

And the others' excuses:

Mark Tully: I would not like to nominate my worst book because as an author I know how much I would hate one of my books to be nominated.

Amit Chaudhuri: I think the question (which is your worst book) is beside the point in a literary culture that has little true irreverence, and also almost no genuine engagement with literature.

Pavan K. Varma: I've scanned the titles I've read this year quite carefully, and I'm afraid none of them qualify for being a bad read.

Ram Guha: Worst book will be beyond me.