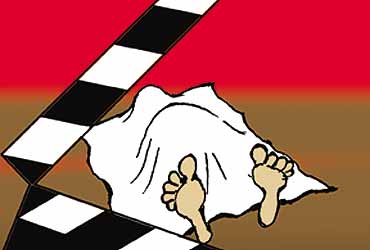 outlookindia.com
-0001-11-30T00:00:00+0553
The tragic saga of murdered Lucknow poet Madhumita Shukla appears to be a real life soap opera that shames the reel stuff. Ambition, poetry, adultery, murder, lies, politics and cover-up combine to make a melodramatic Molotov cocktail of life in India's emerging fast lanes. As the media unfolds one juicy detail after another, it becomes difficult to sift fact from fiction, gossip from reality. The sordid tale leaves nobody or nothing looking good—women, poetry, politicians, police—all look smeared in dirt.

Let's take women first. The victim appears to have been a dynamic social climber looking for short cuts to fame and money. Sure, she took the responsibility of looking after her family when her father died. But many Indian women have taken on similar burdens without adopting her tactics or her route. Reports say she mingled with Gorakhpur's politicians and criminals, staying with them in five-star hotels and hill resorts, using her charm to further material and marital goals. "Affair with a married man"; "jet-setting as minister's wife"; "seven months pregnant when murdered"—apparently by no means was she the sati savitri bharatiya nari.

A 'minor' aspect of this saga that seems to have escaped criticism is how she employed a 10-year-old child as servant and, among other things, made him sit outside while she "entertained" male visitors. Then there's her sister, Nidhi. Protecting the family honour is noble, but telling white lies isn't. She first accused Madhumita's lover's wife, Madhumani, of plotting her sister's murder. Then when the might of the state descended upon her, she had the audacity to claim she did not say "Madhumani" but "Madhu mar gayi". More absurd than her lies are her accusations. Insisting her unmarried sister wasn't pregnant, she accused the authorities of foisting a foetus on the corpse. One doesn't know what is more shocking—her wild accusations or her ignorance about DNA tests.

Then there is the other woman, imperious UP chief minister Mayawati. Any criticism of her is contemptuously dismissed as "upper caste bias". That she inducted Madhumita's lover, a "category A history-sheeter" into her ministry even after he was sacked by the earlier CM for his role in a kidnapping speaks volumes about the depths to which our politics have sunk. Even when the scandal erupted, her initial reaction was to protect, not punish, her shady minister.

Now let's look at the poetry. Words have associations and images of women poets bring to mind Sarojini Naidu, Amrita Pritam, Subhadra Kumari Chauhan, Mahadevi Varma. It is disquieting to read about one who spends late nights with notorious men, returning home drunk in vip government cars with red lights. And what she wrote seemed more bigotry than poetry. Her 'fiery' verses exhorted people to kill, bomb and maim Muslims and Pakistanis. Her ideas were even more absurd—exhorting our bachelor PM to marry Benazir Bhutto and bring Pakistan as dowry!

And then there is the modern Indian politician, Amar Mani Tripathi—Madhumita's alleged lover—with 33 criminal cases against him, ranging from land grab to murder. But he worms his way up to become minister. This is easily the most telling and tragic aspect of the story, the underbelly of our democracy—the system degenerated to such an extent that lawbreakers become lawmakers. How safe are we here? Is this the India our children must inherit? What have we done to deserve such people in power?

But however sordid a story is, there are silver linings. Public pressure forced Mayawati to sack Tripathi, transfer a senior SP and for what it's worth, order a cid probe. Democracy can and does work. More than anything else, this scandal highlights the need for a renewed people's movement to force our authorities to implement the Election Commission directive about keeping criminals out of Parliament and assemblies.If we are to save the democracy that we are so proud of, this has to become top priority for civil society—with all public-spirited individuals taking this up as a crusade. Otherwise, all of us will sink into collective cynicism. Nothing will happen, political interference will derail investigations, witnesses will be bought off, media will forget this story the moment the next scandal breaks. Life goes on for the worse, while our democracy bleeds. Had this been a mere crime of passion, it wouldn't be any of our business. But when it shows symptoms of becoming a crime of politics, then civil society must get involved for it raises serious questions concerning the law, police investigation, accountability, political interference and cleansing public life.

Now let's take a look at the police. They behaved even worse than the uniformed clowns in Bollywood films. How could they not have conducted a DNA test on the foetus in the first place? How can Tripathi's sim card—discovered in Madhumita's house after the murder—wind up again in his possession? How can cops break into her house and leave surreptitiously in the dead of night with a black bag—presumably containing incriminating evidence?

Had this been a serial, we would dismiss it as melodramatic trash. But the incident is full of bizarre twists. The hearse carrying Madhumita's body is interrupted midway and made to return, ostensibly to conduct a paternity test on the foetus. Then there are stories of how Madhumita, heady with newfound power, bamboozled neighbours over petty disputes; how scorned wife Madhumani stormed into Madhumita's house and screamed at her. And we blame Ekta Kapoor for her pulp serials! As a nation we have to ask: "Is art imitating life, or is life imitating art." The discomfiting answer appears to be: art is bad, but life can be worse.