Back To The Good Lord 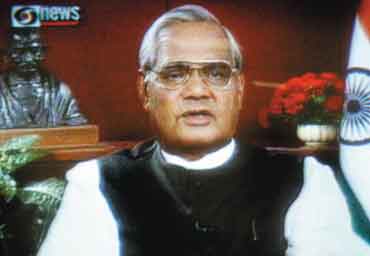 outlookindia.com
-0001-11-30T00:00:00+0553
The day before the results of Election 2004 were announced, the air-conditioning in the media briefing room at the BJP's national headquarters in Delhi broke down. Wiping his brow in the May heat, party spokesperson Mukhtar Abbas Naqvi lobbed a feeble joke: "India is still shining—but if there is a temporary breakdown, it is because of the Congress party."

So self-assured about a victory, the BJP's managers and spin doctors cut sorry figures in defeat. There was party president Venkaiah Naidu, his bald pate shining very brightly indeed, refusing to concede that the entire 'feelgood' and the 'Bharat Uday' campaigns had been starkly out of touch with Indian realities. On D-Day, May 13, the usually garrulous Arun Jaitley appeared to have been shocked into silence. It was left to Pramod Mahajan to admit that he was "half-stunned and half heart-broken".

In one of the most astonishing electoral results in independent India, the carefully built BJP-NDA structure has collapsed like a house of cards. Cemented brick by brick by the RSS and the larger Sangh parivar, it had been projected as an impregnable fortress. One that was polished to a fine sheen by its new-age managers and spin doctors.

The defeat is of epic proportions because it has left a BJP confronting a crisis about its core identity. For not only has the moderate Atal Behari Vajpayee lost the prime ministerial battle to a mere 'foreigner', on the other end of the ideological pole, even the great 'Hindu Hriday Samrat' Narendra Modi has had the ground shifted under his feet in Gujarat. The Lok Sabha defeat, admits Mahajan, was completely unexpected.

The BJP is already in post-mortem mode and doing what Indians are so good at doing: passing the blame. A section of the party and parivar is targeting Vajpayee for losing sight of the BJP's ideological moorings. Modi had, in fact, during the course of the campaign strongly spoken out against the wooing of Muslims by the BJP in an internal party forum. The Gujarat chief minister had apparently said that this was a fruitless exercise as the Muslims would never support the BJP. Moreover, in his perception, chasing Muslims alienated Hindus. The prime minister's speech at Kishenganj in Bihar, when he had offered to create jobs for two lakh Urdu teachers, had in particular invited the scorn of the sharp-tongued Modi.

Says a BJP strategist, "This is a classic example of minority appeasement when you forget your core vote." Sections of the party and the RSS have also been critical of the entire Himmayat committee exercise in Uttar Pradesh, a forum of Muslims set up to sell Vajpayee to the community. A bus used by the Himmayat committee had a picture of Vajpayee and Musharraf. "When you use a picture of a Pakistani to sell a Hindu party like ours to the voter, you should know that the BJP has lost its way," says a former MP from UP who was trounced in these elections. There are also sniggers about a publicity film starring Delhi's Imam Bukhari—famous for issuing fatwas that Muslims ignore—appealing to the community to vote for the BJP.

All this gripe about "Muslim wooing" indicates the knee-jerk desire in a section of the BJP to revert to its hardline agenda. Praveen Togadia and the vhp boys are undoubtedly straining at the leash. The BJP's defeat in Kashi, Mathura and Faizabad (that includes Ayodhya) is particularly humiliating. Yet, the BJP is in a real dharam sankat (crisis of faith) because in the course of the last decade the party has also learnt that there are limitations to pursuing the hard line. And the Modi fan club in the BJP/RSS is hardly in a position to impose its vision of India after taking the party to its worst-ever performance in Gujarat in a Lok Sabha election. Admits spokesperson Prakash Javedkar: "It will take us some time to rebuild and decide which path to adopt".

The RSS would like the BJP to get back to its old ways, read "the core Hindu agenda". Says spokesperson Ram Madhav, "In these polls, there was not much of the ideological element and the focus was on development and leadership. Perhaps the softening of the ideology and the attempt to project a secular face did not enthuse party workers or core voters. We have to ensure that our core doesn't get put off or demoralised, and stays with us."

For even more disastrous than the loss of its so-called 'Hindu' constituency is the loss of the BJP's core urban support base. On the surface, the BJP's shining India pitch is being said to have boomeranged because it failed to address the concerns of rural India. A closer scrutiny of the results, however, indicates that the BJP was rejected even by those parts of India that have benefited from the economic reforms and should logically be "feeling good" about their glittering new malls promising consumer nirvana. In Delhi, where the party had held all seven seats, it won only one. The results from Mumbai, the industrial capital of India, were perhaps even more shocking for the BJP- Shiv Sena alliance. Several high-profile members of the Vajpayee regime, including Lok Sabha Speaker Manohar Joshi lost. An even bigger upset was actor Govinda unseating Union petroleum minister Ram Naik from Mumbai north, which he had won five times with record margins.

Tamil Nadu too sent clear signals. The Vajpayee-Jayalalitha magic did not impress the voters. Neither did all the Sonia-bashing. Such was the wave against the combine that in 40 seats (Pondicherry included), the BJP-aiadmk alliance was defeated by a margin of over 1 lakh votes and in 10 of these by over two lakh votes.

The defeat of 26 members in the Vajpayee council of ministers has also sent the entire NDA reeling. A senior strategist points to another crisis confronting the BJP. All the star speakers of the BJP—Arun Jaitley, Sushma Swaraj, Pramod Mahajan and Jaswant Singh—are members of the Rajya Sabha. And with veterans like Yashwant Sinha and Murli Manohar Joshi defeated, the party that once prided itself on its galaxy of strong orators now has no one of any exceptional ability in the Lok Sabha. Says an MP, "Shahnawaz Hussain was a fairly good parliamentarian but even he is gone. Our front bench will now consist of the likes of Kalyan Singh who is a disastrous parliamentarian. It's hard to think of who will bear the responsibility of taking on the Congress and the Left. With our standards coming down, even Sonia may appear a good speaker!"

She will also have support from the Congress front benches which will now consist of articulate parliamentarians like Kapil Sibal, P. Chidambaram, Mani Shankar Aiyar and Jaipal Reddy. And for some good old-fashioned rabble-rousing in the vernacular, the ruling alliance can always depend on the likes of Laloo Prasad Yadav and Ram Vilas Paswan. Overnight, in fact, an apparently strong and vibrant BJP has become a much depleted fighting force.

Of course, the two grand old men of the BJP—Vajpayee and Advani—do remain. But partymen believe it only a matter of time before Vajpayee retires. Form may, however, compel him to accept the position of Leader of the Opposition for a few months. Vajpayee's imminent departure from the scene is in fact the biggest crisis looming before the BJP. Though Advani is Vajpayee's obvious successor, his public appeal and charisma remain limited. Rues a party general-secretary: "If this is what happens to us with a charismatic leader like Vajpayee at the helm, I dread to think where Advani will take us." Moreover, in private, even an RSS strategist close to the deputy prime minister admits: "Fact is that he is a Sindhi and I can't imagine a Sindhi ever becoming the PM of India." And though there is an ambitious and experienced second rung in the BJP (Mahajan, Sushma and Jaitley are all Brahmins), much of their energies are currently depleted in overtaking each other.

In fact, Verdict 2004 is raising doubt whether Vajpayee's charisma was a mirage all along. Were the projected popularity ratings all part of a carefully-constructed Vajpayee project? Was it all a huge media hype? If the prime minister could inspire only 31 per cent of the electorate in his own constituency Lucknow to come out and cast its vote, is it correct to describe him as a popular leader?

Since it's only a matter of time before Vajpayee sails into the sunset and spends his days in quiet retirement, perhaps writing poetry, he is fast becoming the past of the BJP. Sadly, for the party still reeling in shock, it has yet to work out the direction of its future.

You Can't Buy The People Of India