Back In The Family's Arms 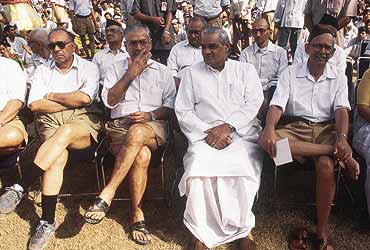 outlookindia.com
-0001-11-30T00:00:00+05:53
Now that the heat and fury over the censure motion on Gujarat in Parliament has blown over, the BJP is faced with a host of challenges and four crucial decisions. The challenges: combating a hostile media, neutralising middle-class alienation and restoring the morale of its cadre. The decisions: picking India's President and vice-president and, more importantly, conjuring a new-look Union cabinet and a fighting-fit party.

How these challenges will be met depends on decisions taken in the next one month. While party sentiments were initially buoyed by the bold insistence on retaining Gujarat CM Narendra Modi in the face of universal hostility, the BJP is now looking beyond the troubled state to the assembly elections next year. For the party rank and file, the BJP's newly assertive attitude holds promise of a return to Hindutva, an end to bullying by its allies in the NDA and increased cadre participation in the government.

As always in times of trouble, the BJP has sought counsel with the RSS. Though sceptical, the latter is drawing up guidelines to assist the BJP in regaining touch with its ideology, the masses, and its own cadre. A draft paper on "micro-governance" has been drawn up and is to be finalised, sources said.

The government's easy victory in the Lok Sabha on the Gujarat issue has improved morale. There's also a feeling that the party ought not to fear a hostile media. Says BJP MP and hardliner Vinay Katiyar: "The more the media writes against the BJP, the better it is for us. Hindu samaj ka jagran hua hai (Hindus have re-awakened)." Spelling out the party's aggressive strategy, he said: "In order to fix the Muslim vote, Indira Gandhi used to instigate riots in Uttar Pradesh and blame the Sangh parivar. They're using the same principle. Sonia Gandhi talks of Dalit-Muslim unity, but who do the Muslims attack first? Don't lose sight of the fact that 28 of the Hindus who died in Godhra were Dalits."

The party also feels that it should no longer keep the choicest loaves and fish of office for its allies. By giving the Lok Sabha speakership to a hardline rather than a "secular" ally, the BJP has indicated that—in the absence of a consensus on K.R. Narayanan—it will field its own man for President.

Confidence has been further boosted by a detailed survey of Gujarat (not be confused with the quickie poll done after the first week of rioting) done by a Delhi-based organisation, which covers each one of the 182 assembly segments. It found that communal riots were very low on the public agenda, that Modi continued to be popular and that the BJP would have won as many as 118 out of 182 seats if elections had been held in the last fortnight of April.

Given the current mood in the BJP, the prime minister's extraordinary statement that he was inclined to sack Modi has infuriated many. Of more concern to the party than Modi's fate is the prospect of the PM drawing back from the proposed "Kamraj" plan which was to impart a fresh look to the Union cabinet and the party organisation. Given the fact that the PM has cut short his Manali holiday, it appears, though, that the cabinet reshuffle, at least, will take place.

The BJP's perceived need for RSS support was evident in that Union home minister L.K. Advani visited its Jhandewalan headquarters twice in April, after a gap of four months. Two days later, he invited sarsanghchalak K.S. Sudershan home and prevailed on him to attend a meeting of senior BJP and RSS leaders at the PM's residence. The RSS supremo has been disenchanted with the PM for over six months and reportedly went there with the utmost reluctance. Apparently, the PM's statement (at a book release function in August 2001) that he was attracted to the RSS by the prospect of "khel-kood" (sports and games) rather than its ideology annoyed the sarsanghchalak.

At the meeting, though, the Sangh leadership agreed to help the BJP regain its credibility and the trust of its cadre. Soon afterwards, five senior RSS functionaries were inducted as "zonal" chiefs of the BJP—Khushabhau Thakre, V. Ramarao, Kailashpati Mishra, Pyarelal Khandelwal and Sanjay Joshi. Keeping the Delhi municipal poll debacle in mind, BJP MP Madan Lal Khurana—perceived as the only leader who can take on the Congress—was put in charge of the city-state. Likewise, Rajnath Singh was given the reins of Uttar Pradesh and Uttarakhand in the hope that the BJP's investment in building up a credible leader in the Hindi heartland would eventually pay off.

Party president K. Jana Krishnamurthy, who effected these changes reportedly in consultation with the RSS leadership (to the exclusion of both Vajpayee and Advani), says the BJP is now in election mode. "At the central leadership level, there have been changes in the distribution of responsibilities.... My effort has been to bring more and more people to share responsibility. I've been touring and meeting grassroots level workers... The sum total effect of all this is that the entire organisation is tuned up, before the elections next year." The shake-up in the party is seen as Krishnamurthy's way of pre-empting the sweeping changes planned by Advani.

The RSS draft paper on micro-governance reportedly points out that several government-run agencies are still being headed by functionaries of the Congress and other parties, and has stressed that this should be rectified expeditiously.

The Sangh is likely to suggest the setting up of a core group of RSS and BJP leaders who have the mandate to discuss all issues related to governance. RSS sources said a "Tuesday meeting" along the lines of the one V.P. Singh used to hold with his allies had also been mooted.

Sources said the Sangh would also like non-performing ministers of state to be shown the door, since they enjoy power without responsibility and don't help the government's image. Significantly, the exit of Brajesh Mishra from the PMO is perceived as not just desirable, but a priority. Sources said the Sangh leadership has no objection to his elevation to the Rajya Sabha or even the Union cabinet, as long as his stranglehold on the PMO is loosened.

While it appears the RSS is playing a rather more important role, factions in both the government and the BJP are opposed to sweeping changes and course corrections, although the feeling in the party is that there is a crying need for both.